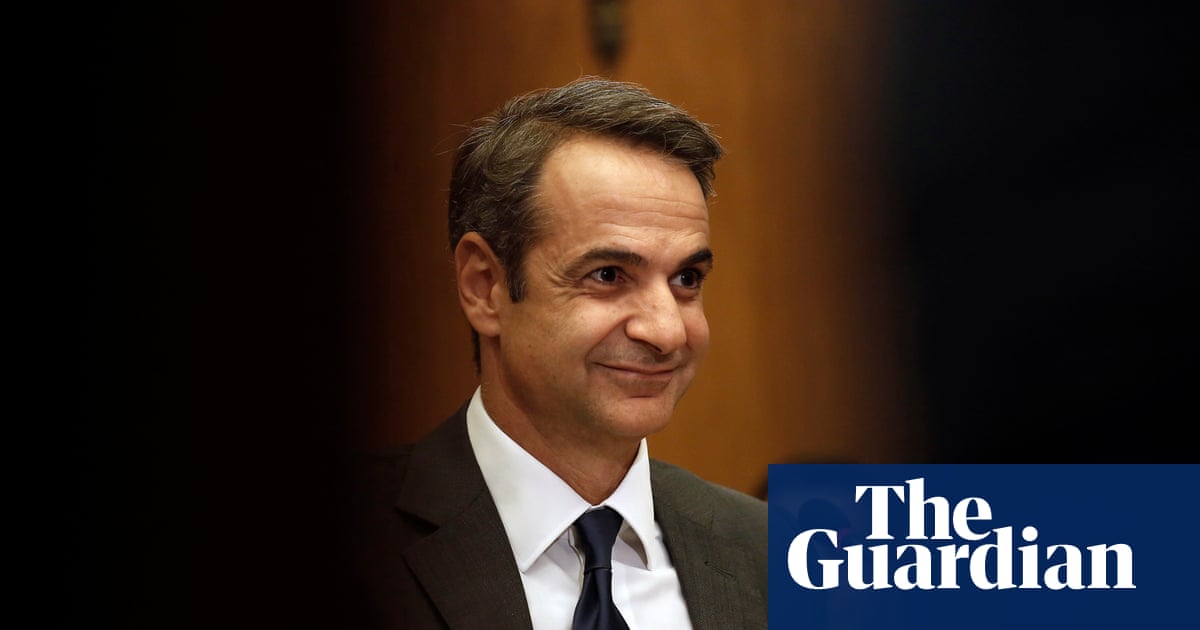 It’s been barely a week but Greece’s new prime minister, Kyriakos Mitsotakis, has hit the ground running. Assuming power on Monday, the New Democracy leader announced parliament would not be going into recess for the summer: there was no time to waste, and bills had to be drafted.

By Wednesday, as his cabinet of established politicians, technocrats and ex-socialist reformers convened for the first time, the philosophy of his centre-right government became clearer still: ministers would not only set targets, they’d be monitored too. Placed before them were blue folders containing benchmark goals. As in any good business, progress reports would have to be kept.

In an era where appearance is everything, Mitsotakis, a former banker, has gone out of his way to set a new tone after four-and-a-half years of often rollercoaster rule under his leftwing predecessor Alexis Tsipras.

Police vans and barriers – which had come to represent the Tsipras government’s fear of protest – have been removed from the road approaching the prime minister’s office.

For many Greeks the new style is not just symbolic. Their first post-bailout government is viewed as the beginning of a new era; the crossing of a psychological threshold after a decade of austerity-driven depression, bailouts, extremist splinter groups and near bankruptcy on the frontline of Europe’s debt crisis.

“What we are seeing is a fresh generation of politician, Harvard-educated, result-oriented and with a more technocratic approach coming to the fore,” Pantelis Kapsis, a prominent political journalist, says of Mitsotakis.

“It’s almost as if he wants to run Greece as a business project, at the risk of offending some of the old guard in his own party.”

Cronyism, nepotism, political patronage and profligate spending have all been blamed for the nation’s inexorable slide towards economic collapse. Aware of his own party’s role in that drama – New Democracy and the social-democratic Pasok party alternated in power for decades – one of Mitsotakis’s first acts this week was to ban the appointment by government officials of relatives to posts, a rule, he said, he would be the first to adhere to. Mitsotakis himself is the son another former prime minister and towering figure of the party, Konstantinos.

As with several Greek leaders, the 51-year-old Kyriakos is part of a powerful political dynasty. But his political ascent was not preordained. The prospect that he would one day lead New Democracy, one of Europe’s most socially conservative parties, to a landslide victory seemed improbable only a few years ago.

Although raised in the shadow of his father and his older sister, Dora, who would go on to become mayor of Athens and foreign minister, politics was not his first call. Instead, the younger Mitsotakis continued his studies in the US before venturing into the world of finance.

When a job with Chase Investment bank beckoned, he moved to London. It was there that he lived for years with his banker wife Mareva Grabowski – time that friends credit with shaping views considerably more progressive than most in New Democracy.

It was not until 2004, several years after his return to Athens, that the then father-of-three became an MP but his ascendancy to the party’s helm was unexpected. Throwing his hat into the ring for the leadership race in 2015, Mitsotakis was considered a rank outsider, a centrist whose liberal economic views chimed with neither nationalists nor populists in its ranks.

“Initially his poll ratings weren’t high at all; he was held in suspicion by MPs,” said Theodore Pelagidis, a professor of economics at Piraeus University who advised him at the time. “Not more than three or four [out of 75] backed him. He only won because he was persistent, systematic and workaholic – qualities he has since brought to the party.”

As soon as he took over, New Democracy’s headquarters were moved from a building on a central Athens boulevard that cost €98,000 (£88,000) in rent per month to premises in a gritty neighbourhood that cost 9,800 euro monthly. In line with the politician’s green sensitivities, the new offices were turned into an eco-friendly behemoth, where water saving and recycling has become the norm.

Aides say he will be using similar techniques to try and transform Greece, a country that despite being brought to the brink of expulsion from the eurozone, and still closely watched by foreign creditors almost a year after exiting its third bailout, remains deeply resistant to change.

“His philosophy is one of progressive liberalism. He believes in the welfare state, universal health care for all, and in high quality public services but also in the creativity of the market economy,” said Pavlos Eleftheriadis, professor of public law at the University of Oxford who ran as a candidate for the party in May’s European parliament elections. “His thinking and his sensitivities belong more to the centre than the right. He is willing to experiment, innovate, take risks.”

Eleftheriadis, who helped found the centrist Potami party and describes himself as belonging to the centre left, says New Democracy would not normally be a natural home. But, like others, he was won over by Mitsotakis’s anti-populist stance and reformist, pro-European, internationalist policies.

He said no leader comes to the job as well prepared. While in opposition Mitsotakis had concentrated on planning ahead, preparing the party’s manifesto, singling out foreign-based academics and business people who, when the time came, could fill government posts.

“He’s a strategic thinker … what he’s pulled off in his government has been a very difficult balance,” added Eleftheriadis. “He’s had to mix established politicians, with wide popular appeal, with unknown technocrats whose expertise will allow them to be more effective and more focused on specific policy.

But Mitsotakis also has his opponents. His new administration has been criticised for the under-representation of women – they hold just five positions out of a total of 51.

Asked about this, Mitsotakis claimed there weren’t many women “interested in stepping into politics” and said he had approached women but they “were much more hesitant” to take up cabinet positions than men. He conceded that it was a “definite area of improvement” for his government and said he hoped to appoint more when he had his first cabinet reshuffle.

His untrammelled belief in the private sector whose investors, he hopes, will help create jobs and reduce record rates of unemployment, has sparked fears that the country’s public utilities and natural resources will be sold off to the highest bidder.

Few have forgotten how as administrative reform minister he dismissed around 5,000 people, almost overnight, from jobs in the public sector at the behest of lenders keeping Athens afloat. There have also been charges of some New Democracy MPs holding stridently antisemitic, homophobic views, despite Mitsotakis having endorsed legislation in favour of same-sex civil unions.

“He’s very neoliberal and he’s been a hostage of rightwing nationalists in New Democracy over issues like Prespes,” said the leftist writer Dimitris Psarras, referring to the historic accord Tsipras sealed ending the decades-long name row over Macedonia, Greece’s northern neighbour, now called the Republic of North Macedonia.

“He took a very tough stance on that even though his own views previously had been much more moderate. It was cynical and hypocritical. In my view he is weak. A lot of what he does is motivated by a desire to prove he is as good as his sister and father, both much bigger political personalities.”

Promises of tax reduction – a key vote drawer – could also prove challenging. Within hours of assuming office, the EU made clear that it would not be tolerating any fiscal derailments. Greece, it said, would have to keep to its commitment of producing budget surpluses of 3.5%, even if Mitsotakis has said his endgame is to renegotiate such straightjacket fiscal targets.

And although out, at 45, Tsipras is by no means down. Instead his Syriza party has called its ability to pick up 31.5% of the vote, despite being the one forced to apply tough austerity measures, nothing short of a victory. Once the new government starts implementing unpopular measures opposition is likely to be formidable.

“What Mitsotakis has done is risky. Politics is all about compromise and technocrats don’t always know how to do that,” said Kapsis. “When reforms come up against resistance he will almost certainly run into trouble with his own MPs. Right now, we’re in the honeymoon period but miracles in politics never last.”