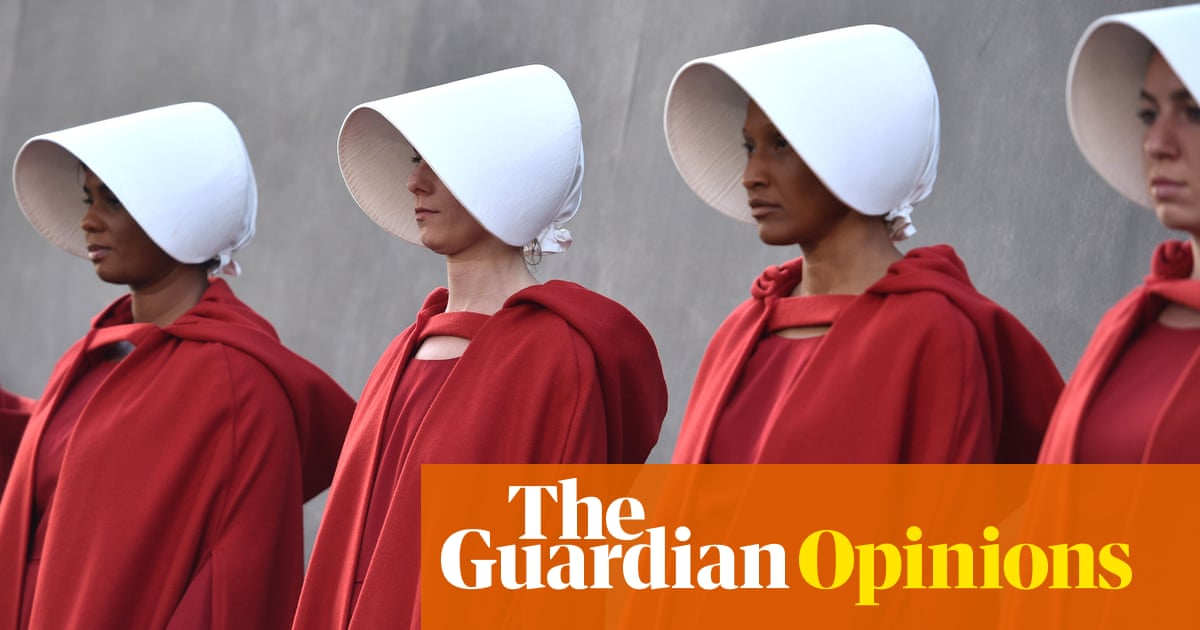 I felt a small spark of joy yesterday, as I imagined Margaret Atwood’s facial expression when confronted with the news that a member of the Kardashian family – Kylie Jenner – had provoked internet outrage by organising a Handmaid’s Tale-themed party. The novelist is known for taking no prisoners, and the footage, which shows Jenner and her friends squealing as they are confronted with Handmaid-themed costumes and cocktails, lays bare some of the most flagrant stupidity I think I have ever witnessed.

Was I particularly offended? Before anyone cries “snowflake”, I was not. But I was astonished at the ignorance and privilege of the women in the video, who will never suffer if Roe v Wade is repealed, abortion is outlawed in the US and women’s bodily autonomy is drastically curtailed. The Handmaid’s Tale is a TV series to them, a piece of pop culture iconography that can be stripped of its context, but even then it is not without its dark connotations. The first series was a brilliant and faithful adaptation of the book, before the next series descended into violence so disturbing and gratuitous, that many women I know stopped watching. Yet the rape and the female genital mutilation and the torture did not preclude this story from being chosen by a young woman as the theme of a glossy celebration ripped of its context and appropriated.

What is happening? Is a Handmaid-themed party a case of what the writer and poet Patricia Lockwood identified in her London Review of Books essay about the internet – one of the best depictions ever written of how it feels to be online – as “context collapse”? Or is it something more than that? Like the much shared and now withdrawn “Sexy Handmaid” costume, it’s a form of recuperation, where something transgressive and radical that is challenging to authority is taken and co-opted, defused of its anti-establishment power, and commodified. It happened with punk, with hip-hop, with previous waves of feminism. And in a digital world, this process has accelerated to the point where it has become dizzying.

That this is happening to the image of the handmaid is, of course, deeply ironic. In the wake of Donald Trump’s election, it has been used at protests all over the world. It has, to a certain extent, become a meme. Its what you might call “virality” is partially linked to its semiographic nature: its association with the subjugation of women can be immediately grasped by any of the millions of people who have read the novel or seen the show. It passes comment on world events with heavy, voiceless irony: no need for a slogan, a treatise, a speech, it’s all there: “under his eye” and “nolite te bastardes carborundorum”.

It has proved effective, though some disagree. “An overdone visual relied upon by unimaginative white women,” wrote NUS women’s officer elect Rachel Watters on Monday. Personally, I find the microscopic critical attention placed upon what women wear at protests – whether it’s handmaid’s costumes or pussy hats – deeply suspect. It wasn’t really what the women’s march was about for most of the millions of women who protested. But solidarity is dangerous and must be undermined. Besides, those who have read the novel will understand that the costume goes beyond being a form of effective feminist shorthand.

I was a teenager when I read my mother’s old tattered Virago copy of The Handmaid’s Tale for the first time. It gave me nightmares. I had never been presented with the possibility of losing my bodily autonomy before, and to live so long as a woman and not feel that was indeed a privilege (later, when I was attacked, I felt it entirely).

Yet the most chilling aspect of Margaret Atwood’s 1985 novel is not the misogyny, the systematic rape, the loss of bodily agency that comes from the use of enslaved women as baby machines, the physical violence. These crimes are all horrific, and, as Atwood has famously said, have all happened to women in the world, at some point in history.

Yet somehow more terrifying is the drip, drip, drip of how American women become subjugated, how the protagonist, the handmaid Offred (literally “Of Fred”, because she is his property) reflects with cool and bitter hindsight on the hints that were there, if you looked hard enough: “Nothing changes instantaneously: in a gradually heating bathtub you’d be boiled to death before you knew it. There were stories in the newspapers, of course, corpses in ditches or the woods, bludgeoned to death or mutilated, interfered with, as they used to say, but they were about other women, and them who did such things were other men. None of them were men we knew. The newspaper stories were like dreams to us, bad dreams dreamt by others. How awful, we would say, and they were, but they were awful without being believable. They were too melodramatic, they had a dimension that was not the dimension of our lives.”

When women started using the powerful image of the handmaid, with her red gown representing her sinful nature, and her white bonnet so she can only look in front, as a form of protest iconography following the election of a misogynist president, conservatives were naturally dismissive of comparisons between America and Gilead. What they didn’t get was that, like the novel, it was a commentary on misogyny’s mission creep. Female protesters weren’t comparing their lot to that of Gilead (though Atwood herself has said that Gilead does not feel that far off these days), just as Offred didn’t start panicking until the religious fundamentalists cut women off from their bank accounts. They were drawing attention to the fact that the bathtub was getting hotter.

It is an important point, and one that requires continued repetition. When women across the world watched Brett Kavanaugh confirmed as a supreme court judge, we felt a particularly visceral form of powerlessness. It’s a sick feeling in your stomach, a kind of knowing hypervigilance. Northern Irish women have felt it much longer, and now the women of Alabama will feel it, too. A recuperated handmaid may not be much use in the battle to come, but then again, Atwood’s sequel, The Testaments, is planned for the autumn. It could be that she takes it to another level, adds layers of meaning where TV has fallen short. And as for Jenner, well, you could say that patriarchy got her long ago.