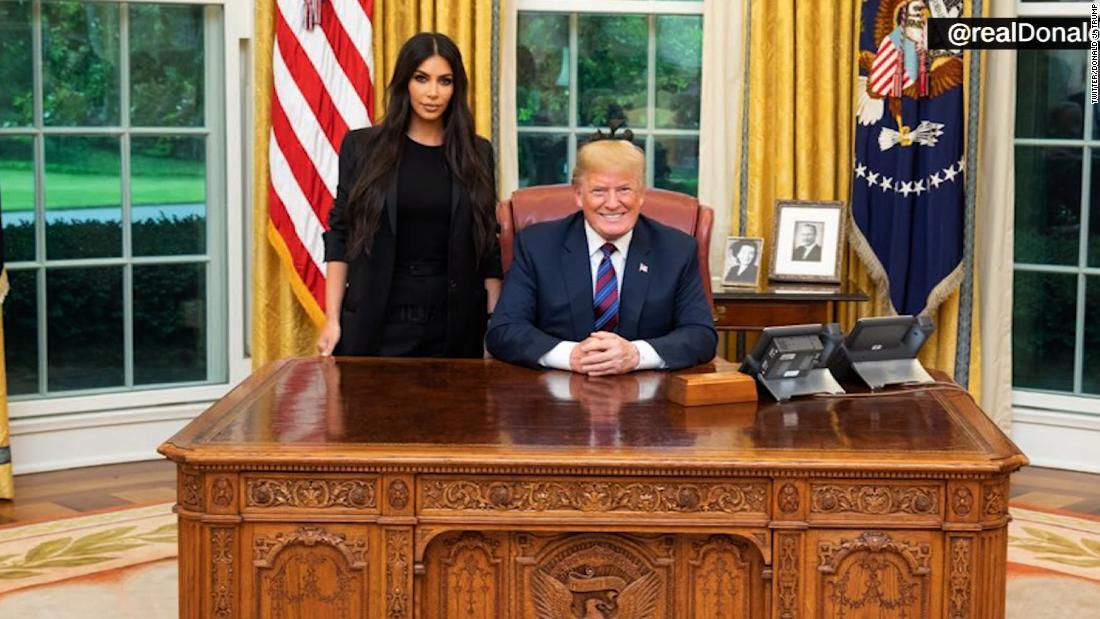 Kardashian West said she connected with the great-grandmother, who served 22 years of a lifetime sentence for a first-time nonviolent drug offense, after discovering her story on Twitter.
Alice Johnson gets chance to personally thank Kim Kardashian West for her freedom
That led to her working to secure a meeting at the Oval Office, she said.
“I walk in and I look around and I’m kinda starstruck by the Oval Office. And the first thing I say in our meeting, I say, ‘Holy s**t we’re in the f***ing Oval Office,'” Kardashian West recalled.
She said she was naked and in the midst of a photo shoot when Trump called her about the meeting.
“I’m naked and my phone rings and I’m all glammed up,” Kardashian West told Kimmel. “I’m like ‘[Gasp] get me a robe!'”
“I put a robe on and I was kinda bugging out during the shoot, because I’m like, ‘Oh, my God, all these amazing things are happening,’ and I’m still going to be me,” she added. “I’m like, ‘What do we do? Do I do this nude shoot, don’t I do this nude shoot?’ And I did it.”
Kimmel seemed tickled by the revelation.
“Did the president know you were in a robe and nothing else?” Kimmel jokingly asked. “Cause he probably would have released the whole prison.”
The makeup mogul also discussed her husband, rapper Kanye West’s continued admiration for Trump. She said she doesn’t debate politics with her spouse.
“To make it clear, when we would talk about it and would talk about policies, he doesn’t necessarily agree with [Trump’s] policies,” she said. “He likes his personality and how he made it to be president when everyone really underestimated him. [Kanye]’s not political, so he doesn’t really dig deep with what’s going on.”
Kardashian West said she follows a similar path as her husband’s when it comes to Trump.
“I have nothing bad to say about the president. You know, he’s done something amazing,” she said. “I don’t agree with everything either. I had no idea what to expect going in there and I was like, ‘Look, I’m going to be focused.’ It really turned my idea around in this category.”