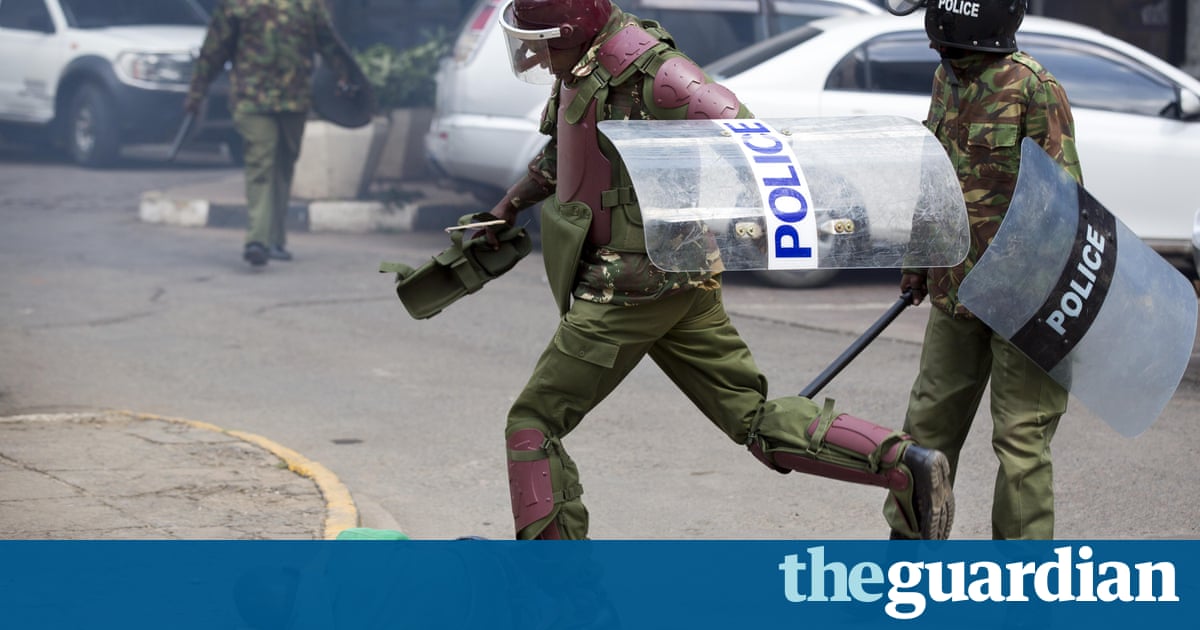 Human rights campaigners in Kenya are calling for the UK to reconsider its extensive assistance programmes to security authorities in the country after three police officers were detained on suspicion of abducting and killing a lawyer, his client and their taxi driver.

The case is the latest apparent extrajudicial killing blamed on police officers in Kenya, but has prompted exceptional outrage. Willie Kimani, a high court lawyer in Kenyas capital, Nairobi, was representing Josephat Mwendwa, a motorcycle taxi driver who had filed a complaint that he had been shot and injured by police in April.

Following the complaint, Mwendwa was subject to a campaign of police harassment, rights activists said. The two men went missing with a taxi driver who picked them up after a 23 June court hearing in Machakos County, on the outskirts of Nairobi.

Witnesses said they saw the lawyer and his client in a basement cell of a local police station shortly after the hearing. They were not seen again.

The British government has long run police reform programmes in Kenya and supplied crucial technical training, as well as equipment, to local authorities. The threat of terrorism in Kenya has reinforced security cooperation and intelligence sharing in recent years. The United Nations also supports police reform projects in Kenya.

International Justice Mission (IJM), a US-based NGO that employed Kimani, said the remains of the lawyer and his client had been found in the Ol-Donyo Sabuk river to the north-east of Nairobi on Friday, following an extensive search led by Kenyan police and the NGOs local staff.

We are deeply mourning the loss of our colleague, Willie, and taxi driver, Joseph, and strongly condemn the perpetrators of these murders and the horrific violence inflicted upon these men, said Gary Haugen, the missions chief executive. IJM exists to protect the poor from violence and Willies life was taken while courageously pursuing that mission.

The office of the police inspector general said on Thursday that efforts to trace the men continued and if any crime was uncovered with links to police officers or others, the law will doubtless take its own course.

Three policemen have now been arrested, it was reported on Friday.

There is credible evidence the men were, at some point, in the custody of Kenyas administration police and may be victims of an enforced disappearance, New York-based Human Rights Watch said.

Prominent human rights campaigners said the suspected murder of Kimani should prompt overseas donors to reconsider their involvement with the Kenyan police.

The British have been funding police reform in Kenya since the early 1990s. They have been pumping money in for that long and had no results and that risks simply strengthening the culture of impunity. You cant keep on giving carrots. Eventually you need a stick, said Maina Kiai, a veteran human rights activist and lawyer in Nairobi.

The number of extrajudicial killings involving Kenyan police or security services runs into the high hundreds over the past six years, according to Kenyan institutions and NGOs.

People are afraid to report these incidents. Parents are worried that if they tell the police that someone has disappeared or they think a son has been shot dead, then they will be harassed, said Hussein Khaled, of Haki-Africa, a campaign group in the coastal city of Mombasa.

Khaled said his organisation had documented more than 70 abductions locally over the last two years.

Ahmednasir Abdullahi, a former chairman of the Law Society of Kenya (LSK), told Reuters: It is becoming a pattern that people are disappearing without any trace and with no person taking responsibility.

The LSK president, Isaac EN Okero, told local reporters on Friday that the death of Kimani marked a dark day for the rule of law in Kenya. He added: Our worst fears are confirmed. Advocates and citizens are at risk of elimination by police death squads.

A Foreign Office spokeswoman said the disappearance and suspected murder of Kimani and the two other men was concerning.

The British government has been supporting the Kenyan police force to promote reform, strengthen accountability and improve compliance with international human rights standards. Following this concerning incident its important that immediate steps are taken to investigate and that those responsible are held to account, she said.

British officials have argued that the acute problems within the Kenyan police force reinforce the argument for helping the service to reform.

Local campaigners said the police station where Kimani and the other two men are believed to have been held was notorious for human rights abuse.

Maalim Mohammed, the police commissioner of Mombasa city, told the Guardian last week that all policing in Kenya conformed to due process and the constitution.