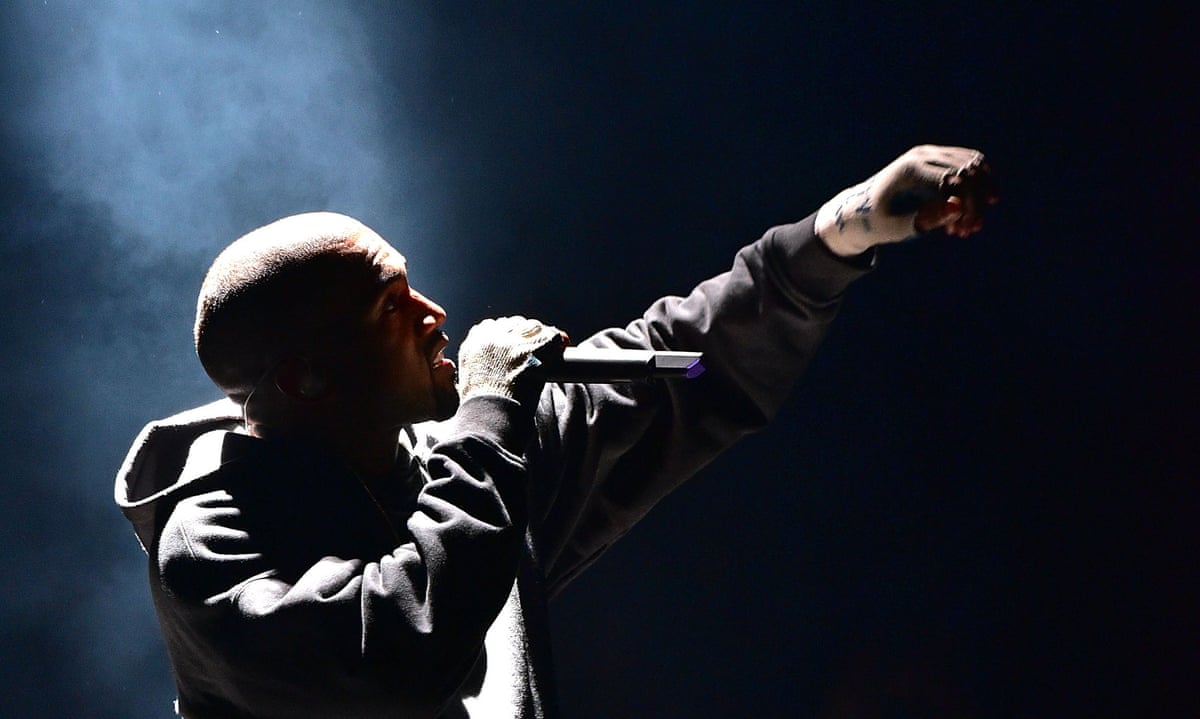 In an era when the likes of Beyoncé can release perfectly formed records without warning, the saga of Kanye Wests seventh album has been comically messy. He first announced it a year ago, under the name So Help Me God, but postponed its release by several months while renaming it Swish, Waves and, finally, The Life of Pablo.

In the weeks prior to its grandiloquent live-streamed launch at Madison Square Garden on Thursday an album playback featuring celebrity guests and an army of black models debuting Wests latest Yeezy fashion line he posted a series of perplexingly self-destructive tweets on topics including his ex-girlfriend Amber Rose and Bill Cosby. Even for a man who clearly subscribes to Oscar Wildes dictum, There is only thing in the world worse than being talked about, and that is not being talked about, it was a bizarre display.

West, 38, is arguably the most important pop artist of his era and certainly the most compelling, for good or ill. He speaks, and indeed acts, in superlatives. In recent years he has described himself, not always entirely seriously, as the greatest living rock star on the planet, the new Steve Jobs, a potential US president and, simply, the nucleus. Inevitably, he inspires extreme reactions.

When he was booked for last years Glastonbury festival, more than 130,000 people signed a petition calling for an insult to music fans all over the world to be dropped. The vehemence of such attacks on an apologetically outspoken black man doubtless had a racist dimension but that alone does not explain why the rapper is such a uniquely polarising figure.

West was brought up to achieve great things. Born in Atlanta, Georgia, but raised in Chicago by his mother, Donda, an academic, he was given the name Kanye meaning only one Omari wise man and she taught him above all to love himself. In her memoir Raising Kanye, Donda wrote that West inherited from his father Ray, a former member of the Black Panther party, little patience for what he thinks is unjust. Wests kindergarten teacher said to Donda: Kanye certainly doesnt have any problem with self-esteem, does he?

That dude was focused since he was a shorty because he knew what he wanted to do and he had a mother who supported the shit out of him, his friend and fellow rapper GLC once told Complex magazine.

After enrolling at art college in 1997, West dropped out to pursue production work for the likes of Jay Z, with a signature sound based on accelerated soul samples, and then fought doggedly to be taken seriously as a rapper.

In October 2002, West was involved in a car crash that shattered his jaw and changed his life. He was convinced that God had saved his life and that he needed to write more profound lyrics. He described this epiphany in his 2003 single Through the Wire: a superheros origin story in which he emerges from a life-threatening accident stronger than ever. I knew I was dealing with a different human being after the accident, his managerGee Roberson told Complex. From that day forth, it was game on.

Unlike his mentor Jay Z, the middle-class West couldnt draw on a violent, hardscrabble youth for credibility so he had to create his own drama, trumpeting his talent and ambition to a degree that was unusual even by hip-hops self-aggrandising standards.

Im the closest that hip-hop is getting to God, he told journalists at an album playback in 2005. Talking to the Guardian afterwards, he described his florid braggadocio as both a form of self-motivation and a theatrical performance. Its like Im walking on this tightrope. Its like, damn, what if he falls? And if I do make it, its like, damn, he made it! But either way youre saying damn. Everybody else is just walking on the ground.

West backed up his rhetoric by constantly redefining what hip-hop could be. The College Dropout (2004) bridged the gulf between mainstream rappers and socially conscious underground MCs. The lavish Late Registration (2005) was co-produced by thefilm score composer Jon Brion. The Daft Punk-sampling, Nietzsche-quoting hit Stronger, from Graduation (2007), began hip-hops lucrative liaison with EDM. Most of its current stars, including Drake and Kendrick Lamar, walked through doors that West opened.

West is a tireless enthusiast with constantly expanding tastes and an ear for whats next. He has been adept at choosing collaborators, from big names such as Rihanna and Daft Punk to up-and-comers such as Arca and Kid Cudi, and taking inspiration from fashion, cinema, architecture and visual art. He is a famous perfectionist who claimed to have mixed his single Stronger 75 times before he was satisfied.

Logic would seemingly state that an album with so many people working on it would sound disjointed, but what Kanye manages to do is get the best out of everyone working towards one sound, the producer Evian Christ told Pitchfork in 2013. You cant really overstate how difficult it is to do that.

West is also an unpredictable lyricist who is equally capable of self-aware jokes, crass, misogynist punchlines and eloquent examinations of race and class. Early in his career, he spoke out against homophobia in hip-hop and blurted out George Bush doesnt care about black people during a telethon for victims of Hurricane Katrina, although he has only sporadically engaged with politics since. He is often at his best when he is being inappropriate. (Five years later, Bush called the incident the all-time low of his presidency.)

Wests behaviour changed dramatically after Donda Wests death in November 2007, from heart disease. He rarely talks about the loss but last year told Q that he blamed himself: If I had never moved to LA shed be alive. West became a more haunted and guarded figure, returning to music with 808s & Heartbreak (2008), a brave, introspective album that featured more Auto-Tuned singing than rapping and paved the way for Drake and The Weeknd.

The loss of his mother invited sympathy but the next turning point in Wests life inspired fury and derision. In 2009, he interrupted Taylor Swifts acceptance speech at the MTV Video Music Awards, bringing to the boil a long-simmering backlash. (West ungallantly references the incident on his new song Famous.) He retreated to his bunker if Hawaii can be called a bunker and made his decadent epic My Beautiful Dark Twisted Fantasy (2010) with a legion of collaborators including Nicki Minaj, Bon Iver and Elton John. He later described it as a long backhanded apology.

In recent years, Wests ambition has become both grander and more diffuse. During interviews and concerts to promote Yeezus (2013), an audaciously abrasive electro-punk primal scream that he called a protest to music, he delivered long, furious monologues about his struggle to break into the fashion industry.

He increasingly seems more interested in clothes than in music Right now, over 70% of my focus is on apparel, he told Paper magazine and much more besides. He has compared himself to such world-changing figures as Picasso and Walt Disney, befriended the tech stargazer Elon Musk, and talked about his ambition to inspire an army of risk-taking cultural soldiers. You can see the growth from Im gonna be this great artist to I wanna do something that ignites a fire in peoples souls, he told Q.

However much credit West gets, it is never enough. In a 2013 interview he compared his critics to the eight-grade basketball coach who would not include him in the team even though he hit every shot. The next year, he made the team. West is driven by the desire to prove his doubters wrong, and fired up by his previous ability to do so.

While most high-profile artists accept that they cannot please everybody, West craves approval from establishment institutions that he appears to hate, from the Grammy awards to European fashion houses, as a point of principle. I dont care about the Grammys, he told the New York Times. I just would like for the statistics to be more accurate.

It is unclear what will happen when West can no longer hit every shot. The singles he released last year, including collaborations with Paul McCartney, were coolly received. His Glastonbury performance promised to be either a triumph or a disaster but, most reviewers agreed, fell somewhere in-between. Pitchforks Jayson Greene wrote: He is responsible for the current zeitgeist, but listening to his slightly confused new material, you get the distinct sense that hes struggling to find his current footing in it.

Reading Wests recent tweets, it is impossible to work out exactly what he is trying to achieve. He is clearly a more volatile and erratic character than he used to be. Marriage and fatherhood are often stabilising influences but marrying Kim Kardashian in 2014 has pitched West into a tabloid world with an endless appetite for gossip. It is unlikely that he could retreat from the spotlight, as he did in 2009, even if he wanted to.

His life and music have combined into an ongoing piece of performance art which is unsustainable at this pitch. No artist can remain the nucleus of pop culture indefinitely. One day, this extraordinarily successful figure will face the new challenge of learning to cope with no longer being the man everyone is talking about.

Career: Began producing music for local Chicago rappers in his teens and landed his first high-profile job in 1999. Launched his solo career with The College Dropout in 2004. Has released six platinum albums, won 21 Grammy awards, designed several clothing lines, and featured twice on the Time 100 list of the most influential people in the world. Runs the record label Good Music and the creative content company Donda.

High point: Bouncing back with his magnum opus My Beautiful Dark Twisted Fantasy in 2010 after his snafu at the Video Music Awards temporarily derailed his career: even Barack Obama called him a jackass. In December 2014, Pitchfork named it the best album of the decade so far.

Low point: The death of his mother in 2007, soon followed by his split from fiancee Alexis Phifer.

What he says: I will die for the art, for what I believe in, and the art aint always going to be polite.

What they say: Hes a brilliant madman. He cant help himself. Like, he doesnt have the same filters other people have. He has to blurt things out hes always saying inappropriate stuff. But he also has brilliant ideas, if you can get him to pay attention long enough Madonna.