With a gesture that almost went unnoticed, the 49ers player ignited a debate about racial inequality, police brutality and the meaning of the American flag 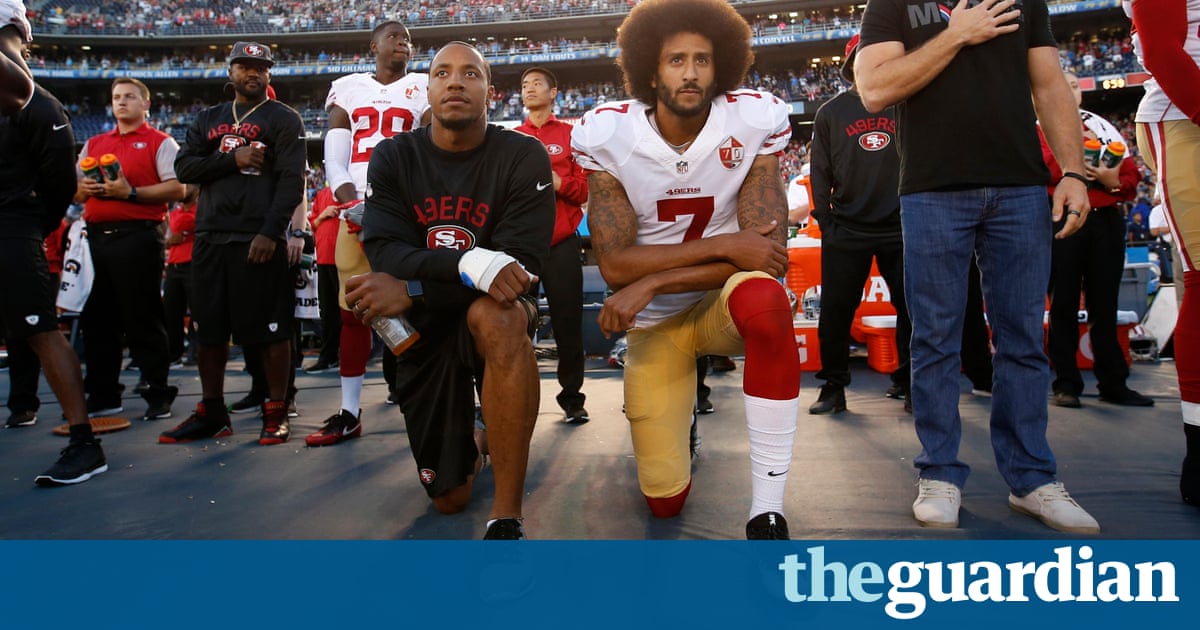 The protest overwhelming the start of the NFL season began not with a shout or raised fist but an act so passive it was all but invisible to the thousands who were there. On the night of 26 August, San Francisco 49ers quarterback Colin Kaepernick refused to stand for the national anthem before the teams pre-season game against the Green Bay Packers. His defiance was nearly impossible to discern as he sat surrounded by Gatorade containers on the teams bench. It might have been missed altogether had a reporter from the NFL Network not noticed and asked him about it after the game.

I am not going to stand up to show pride in a flag for a country that oppresses black people and people of color, Kaepernick told the NFL Network that night. To me, this is bigger than football and it would be selfish on my part to look the other way. There are bodies in the street and people getting paid leave and getting away with murder.

A firestorm ensued, igniting a national debate about racial inequality, police brutality and the meaning of the American flag. Kaepernick, a fading football star who had never seemed political, instantly became a nationally polarizing figure, much as Muhammad Ali had been when he refused to fight in the Vietnam war.

While some fans torched Kaepernicks jersey, thousands more flocked to buy it his shirt is currently the top seller on the NFLs website. As many labeled him a traitor, others have rushed to his side. This week, Georgetown University sociology professor Michael Eric Dyson, an African American historian, called his protest a thoughtful reflection on how best to highlight the plague of injustice, and the need, finally, to hold our nation accountable for black death in the streets. Three players, 49ers team-mate Eric Reid, Denver Bronco Brandon Marshall and Seattle Seahawk Jeremy Lane, have joined Kaeperkick in refusing to stand for the anthem, along with womens soccer player Megan Rapinoe.

In many ways, Kaepernick has chosen the perfect forum for drawing attention to Americas problems with racial inequality. No major American professional league drapes itself in overwrought patriotism more than the NFL, and no other league the NBA aside is as dominated by African American athletes.

The national anthem is a big event before games, with honor guards and salutes to soldiers. Giant American flags often cover the entire field and military jets buzz the stadium, timing their pass to match the anthems final words. In some cities, players clutch American flags as they lead their team-mates to the field. Even in supporting Kaepernicks right to protest, the other day NFL commissioner Roger Goodell was quick to add: We believe very strongly in patriotism in the NFL.

Charged rhetoric has been spilling from the presidential campaign, and the flag is becoming a hammer that some white people have used against African Americans in the US. At last months Olympics, black gymnast Gabby Douglas was besieged with criticism for not putting her hand on her heart as the anthem played during a gold medal ceremony. But while Douglas was standing at attention to the flag, unaware that her action could be perceived as a slight, Kaepernick is intentionally sitting to challenge the kind of racism that unfairly judged Douglas.