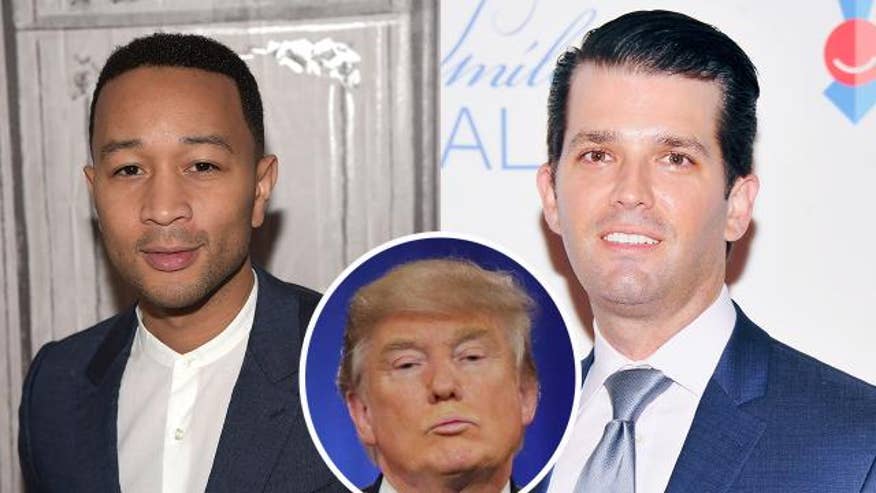 The “All of Me” singer took to Twitter to express his concern over the Republican presidential candidate, calling him “racist” during a heated debate with Trump’s 38-year-old son, Donald Trump, Jr.

PHOTOS: Who the Celebs Are Rooting for to Be the Next President of the United States

On Friday, Trump, Jr. weighed in on the protesters who shut down his father’s scheduled rally in Chicago.

“Ha 5 students when asked why they were protesting couldn’t even answer,” he tweeted. “The participation medal/micro aggression generation is pretty sad!”

Legend chimed in, replying to the controversial tweet with, “@DonaldJTrumpJr I think they were protesting your racist father. This isn’t complicated.”

A Trump supporter added fuel to the fire, asking Legend if he were that “disgraceful” and accusing him of having “no education.”

“The Donalds and I graduated from the same University, funny enough,” the 37-year-old singer-songwriter explained.

Legend, Trump and Trump, Jr. all attended the University Of Pennsylvania, graduating with degrees in English, economics and finance, respectively.

The debate didn’t stop with the collegiate mic drop, however. Trump, Jr. quickly responded to Legend’s tweets, writing, “Here we go again. That can’t be the answer for everything you don’t like. That’s why the country is so divided now!”

Legend’s wife, Chrissy Teigen — who has never been shy about expressing her opinions over social media — also got involved. “Got em,” she simply tweeted in support of her man.

Earlier this month, Miley Cyrus went off on Trump, claiming that she will move out of the country “if this is my president.”

“Donald Trump is a f**king nightmare!” she wrote on Instagram.