Two explosions hit capital shortly after news conference with US secretary of state, who suggested coalition government could continue after September 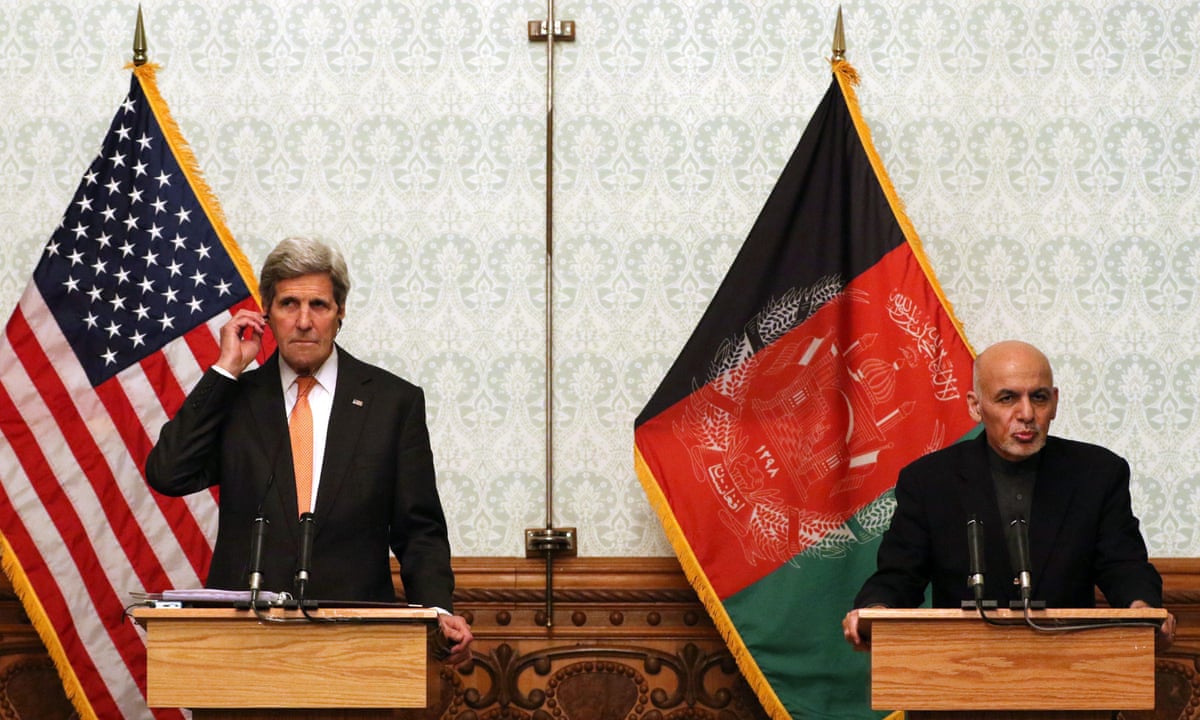 US secretary of state John Kerry made an unannounced visit on Saturday to Kabul, where he suggested, controversially, that Afghanistans coalition government could continue beyond September to avert a political crisis.

Underlining the precarious security situation, at least two explosions, apparently from rockets, hit the diplomatic zone of the capital shortly after Kerrys visit ended and his plane was preparing to take off from outside the city.

Kerrys visit was intended to demonstrate support for the national unity government headed by President Ashraf Ghani, victor of the disputed election of 2014, and his runner-up, Chief Executive Abdullah Abdullah.

The visit coincides with a difficult moment for Afghanistan. Ghanis government has been weakened by infighting between rivals, the economy is sinking and the Taliban is stronger than at any time since they were toppled from power in late 2001.

Kerry repeated an offer of peace talks with the Taliban and called on Afghanistans fractious politicians to work together.

Democracy requires credible institutions, he said. Even more than that, it requires a willingness of people from different political and ethnic and geographic factions to be able to come together and work for a common good.

Under the national unity deal, a special assembly was expected to be held to amend the constitution within two years of the September 2014 election, potentially allowing Abdullah to take the post of prime minister.

Political tension has mounted as the months to September slip by, and opposition politicians close to former president Hamid Karzai have insisted that the unity agreement must be subject to broad consultation.

Kerry, however, said the agreement was valid for the full term of the government, suggesting that the US believes it can continue even without a new constitutional deal.

Let me make this very, very clear because I brokered the agreement: there is no end to this agreement at the end of two years, or in six months from now, Kerry told a joint news conference with Ghani.

This is an agreement for a unity government, the duration of which is five years, he said.

The deteriorating security situation has multipled Ghanis political problems, with Nato officials estimating that government forces have full control over no more than 70% of the country.

US forces in Afghanistan are due to be almost halved, from 9,800 to 5,500 by the start of 2017. The new commander in Afghanistan, General John Nicholson, is conducting a review of security before making his recommendations to Washington some time in June.

Kerry offered no hint on whether the timetable for withdrawal may change, saying only that President Barack Obama would make his decision on the size of the force after listening to what commanders had to say.

With Afghanistans shattered economy still on its knees and its government still struggling with endemic corruption, Kerry said it was crucial for the country to secure international aid.

It is essential for these next weeks and months for Afghanistan to show how that money is well spent and how the purpose of Afghanistan and the unity is going to earn the support and respect of the rest of the world, he said.

In Warsaw in July, Nato is expected to decide how to fund Afghanistans security forces in the coming years. Donor nations will gather in Brussels in October to make civilian aid pledges to Afghanistan.

Noting the dates, Andrew Wilder, an Afghanistan expert at the United States Institute for Peace thinktank, said: The last thing we need is a big political crisis calling into question the legitimacy of the national unity government in September.