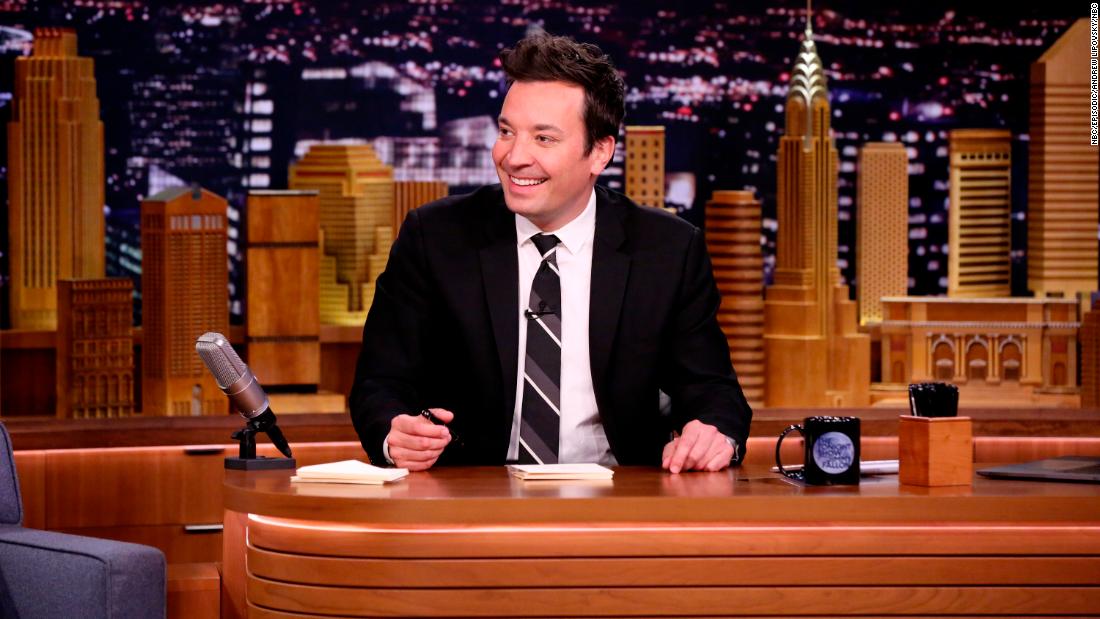 (CNN)Late-night comics like Samantha Bee, Stephen Colbert, Jimmy Kimmel and Bill Maher have all generated controversy, to varying degrees, by being blunt and outspoken about the Trump administration.

“The Tonight Show” host became the unlikely target of a presidential tweet on Sunday, when President Trump — apparently responding to delayed coverage of a Fallon interview conducted by the Hollywood Reporter — said that the host is “now whimpering” about the criticism he received for tousling then-candidate Donald Trump’s hair during a September 2016 appearance.
For Fallon, becoming the target of the president’s ire feels a bit like adding insult to injury, to the extent that unlike his late-night rivals, he has fastidiously sought to continue making a light, funny show, and in the process, seen his claim to ratings supremacy dramatically diminished.
Since Trump’s inauguration, “The Tonight Show” has gone from the clear leader to trailing “Late Show With Stephen Colbert” by a wide margin in total viewers — 3.8 million to 2.7 million, according Nielsen data, for the September-through-May TV season. Because Fallon appeals to an audience that’s likely somewhat less attuned to politics, he has maintained an edge in the young-adult demographics used primarily to negotiate ad buys, but even that gap has significantly narrowed.
The shift reflects a surge on Colbert’s part, and a corresponding decline for NBC. While Fallon has sought to stay within his comfort zone, his approach at times has looked out of step with the prevailing tides.
Although he expressed regret over how he handled the 2016 Trump interview, Fallon summed up the difficult position he’s in by saying, “I don’t want to make anyone angry — I never do and I never will. It’s all in the fun of the show. I made a mistake. I’m sorry if I made anyone mad.”
Fallon also told THR that “I’m one of the good people,” asking those criticizing him to look at the totality of his body of work.
From the beginning, the host has resided squarely in a zone of neutrality and providing a safe venue for his guests — one where they feel able to participate in silly games and playful stunts that portray their lighter side. The way he dealt with Trump — or for that matter, other politicians who have come on “Tonight” during his tenure — was no different.
Those who applaud Fallon’s vanilla-flavored posture can point to a long history of evenhandedness on the part of “Tonight Show” hosts, where Johnny Carson and Jay Leno both studiously sought to dispense political humor across the spectrum in equal measure.
Still, in a June 2016 interview with CNN before the Trump-Fallon controversy, Leno conceded that he would have found it difficult adhering to that ideal in the current political climate, citing issues like gay rights and school shootings.
Leno said the bitter nature of the partisan divide “has a debilitating effect,” and that while he would be courteous to Trump as a guest, “I couldn’t see myself being overly gracious.” Overall, he noted that times were simpler when he was the host, adding, “I’m glad I’m out of that business right now.”
Fallon is still in that business, trying to follow the playbook that made the early years of his “Tonight Show” run a smashing success. That strategy, however, clearly faces a new set of challenges.
Despite the legacy to which Fallon aspires, times have changed. And even being one of “the good people” offers no immunity from the pressure to take a stand.