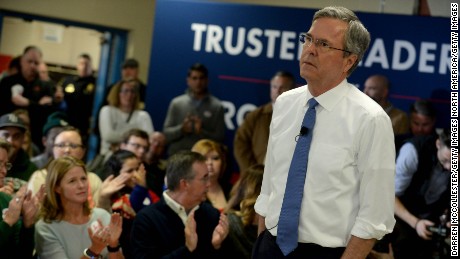 Washington (CNN)Despite being backed by the monumental Right to Rise super PAC, Jeb Bush said Monday he would “eliminate” the Supreme Court decision that paved the way for super PACs.

“If I could do it all again I’d eliminate the Supreme Court ruling” Citizens United, Bush told CNN’s Dana Bash. “This is a ridiculous system we have now where you have campaigns that struggle to raise money directly and they can’t be held accountable for the spending of the super PAC that’s their affiliate.”

Not long after Bush made his comments, Donald Trump — who often touts that he is not using a super PAC — mocked Bush on Twitter.

“Now that Bush has wasted $120 million of special interest money on his failed campaign, he says he would end super PACs. Sad!” Trump tweeted.

Bush’s Right to Rise super PAC has dominated the fundraising race, pulling in $117.6 million last year, according to the latest FEC filings. But that money has not been enough to stop Bush’s fall from the front of the Republican pack. And Right to Rise, run by Bush confidant Mike Murphy, has become the subject of derision among Bush supporters.

In order to overturn the court ruling, Bush has said he would seek a constitutional convention, where he would also push for term limits and balanced budget amendment. The Bush campaign pointed out Monday that he has regularly called for unlimited campaign donations with complete transparency as an alternative to super PACs.

But a liberal campaign money watchdog group said removing the limits on donations would be no better than keeping Citizens United in place.

“If Bush wants to stand out from other GOP candidates on this issue and appeal to voter concerns over money in politics, he should adopt comprehensive solutions to give everyday people a voice in politics,” said David Donnelly president and CEO of Every Voice.

Bush reiterated his comments in a speech Monday afternoon.

“The ideal situation would be to overturn the Supreme Court ruling that allows for … unregulated money for the independent and regulated for the campaign,” the former Florida governor told a Luncheon in Nashua, New Hampshire. “I would turn that on its head if I could.”

Bush has grumbled before about the fundraising demands of the 2016 cycle, but he has sharpened his tone on the trail recently. He cited a mailer from one opponent’s super PAC that attacked his mother, former First Lady Barbara Bush.

“I mean, I just saw a mailing that attacked me through my mother with one of the super PACs,” Bush told CNN. “C’mon man, that’s a pretty low blow.”

A spokesman for Conservative Solutions PAC, which produced the mailer and is supporting Marco Rubio, called it a stretch to say it targeted Jeb Bush’s mother.