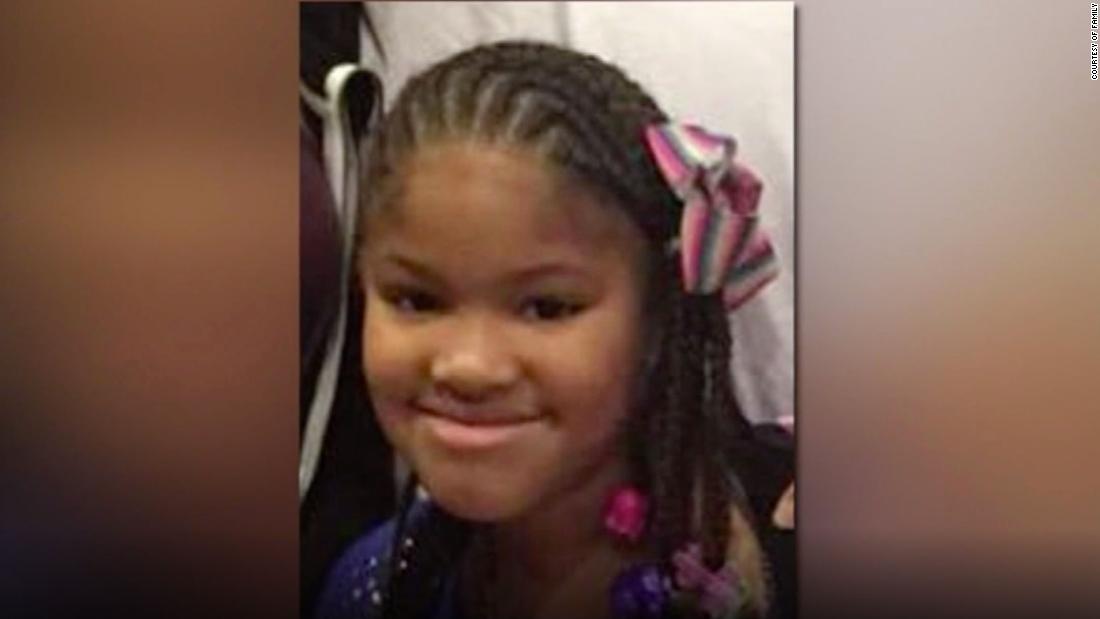 (CNN)The four girls were in their pajamas when they piled into LaPorsha Washington’s car for a morning run to the convenience store.

Her daughters are always “on my heels,” she said. “Everywhere I go, they want to go with mommy.”
This run to Joe V’s Smart Shop would shatter their lives. Jazmine Barnes, Washington’s 7-year-old daughter, would soon be fatally shot in the same rear seat she regularly occupied.
A pre-dawn glow bathed the Houston area as they set out. Music blared from the radio. A traffic light turned red near the Walmart in northeast Harris County. Washington said she wondered whether they might have passed Joe V’s.
It was an unremarkable drive except for one small thing. Washington, 30, and daughter Alexis Dilbert noticed a red or maroon pickup. The truck initially pulled up on the passenger side. It then rolled up driver’s side. Alexis looked over.
“You know when you’re driving and you look in someone’s car and you make eye contact? It was like that,” she said. 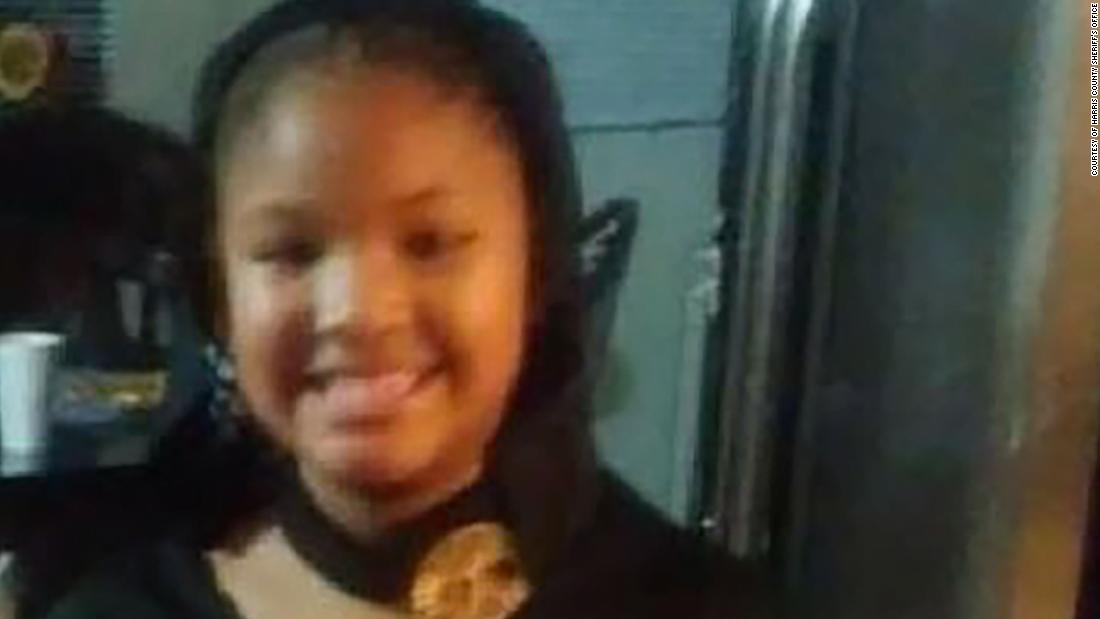 Mom speaks after child is killed in drive-by

The traffic light turned green. Then the shooting began. Washington didn’t hear the first shot. Neither did Alexis. A bullet shattered Washington’s window. The truck sped up. The driver squeezed the trigger again. Now Washington heard the gunfire.
She did what most mothers would do, even after taking a bullet. She hit the brakes. Then she used her body to shield Alexis, her eldest, who was seated next to her The girls in the back were unprotected.
“Get down!” she told them.
“Mama, he stopped. He stopped,” one girl screamed. “I think he’s coming back.”
The pickup appeared to be backing up when the driver suddenly shifted out of reverse and sped off.
“I think I’m hit in the arm,” Washington told the girls.
Alexis, 15, checked on her sisters. She called out their names. They always sat in the same order. One girl complained of neck pain.
“Mama, Jazmine’s not moving,” one sister said. “She’s not talking.”
Alexis called out Jazmine’s name. Three times. No reply.
Washington flicked the dome light. She looked back. Jazmine was slumped against the rear door with a head wound.
“Blood was everywhere,” her mother, tearing up, told CNN.

‘My baby’s not responding at all’ 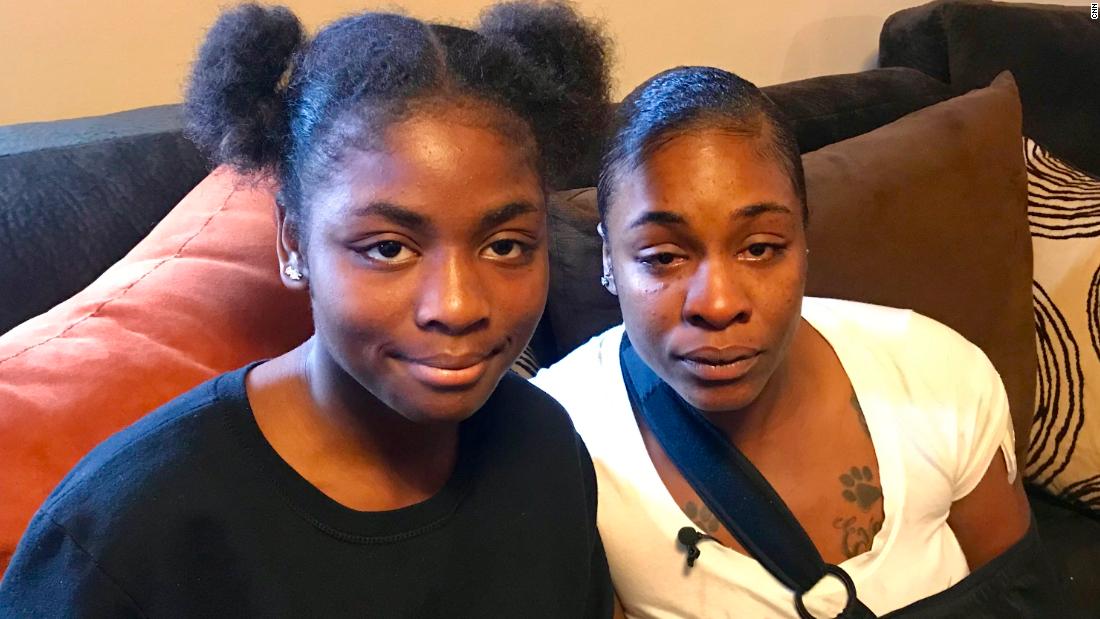 Washington asked one of her teenage daughters to call 911. Alexis looked up the nearest hospital on her smart phone. It was seven minutes away.
She made a U-turn and headed for the hospital. Then the car started to rattle.
“Y’all, the tire is out,” she told her daughters, sobbing. “I can’t make it no further. I’m sorry.”
“Mama, please, we can’t lose you,” one girl cried. “Please, wake up. We can’t lose you.”
Washington would soon pass out.
“Get help. Please, get help,” she told the two teenagers. The girls jumped out to flag down drivers on the freeway.
“We just started like shouting for somebody to come and nobody was stopping,” Alexis recalled. “Everybody just kept passing us.”
Even Washington’s 6-year-old jumped onto the freeway to get help. Minutes passed before a good Samaritan stopped.
“Sir, can you just get my baby and get her to the hospital?” Washington implored. “My baby’s not responding at all.”
“I don’t want to move her,” he said.
“My baby needs to get to the hospital.”
A police officer arrived. Jazmine was not breathing, he told Washington. A paramedic told her Jazmine was critically wounded.
“I think he didn’t want to tell me (Jazmine was already dead) at the time,” Washington said.
Washington was rushed to a hospital and treated for a gunshot wound to the arm. Her 6-year-old daughter was hit by broken glass. In the back seat, Jazmine was dead.
“I knew,” Alexis said. “Since she didn’t say nothing. I knew.” 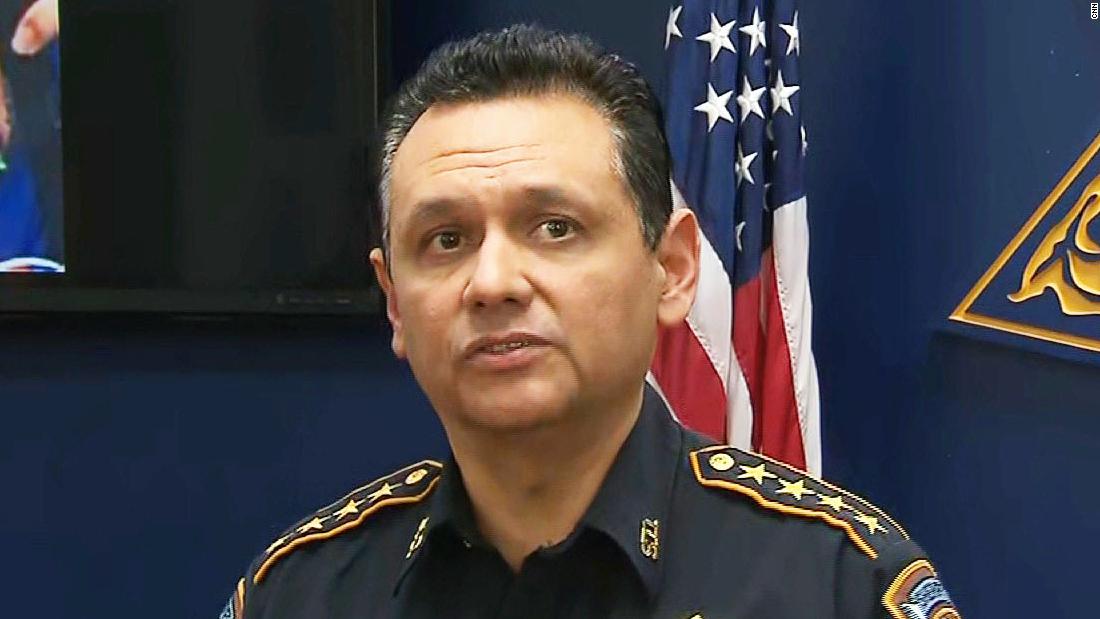 The end of 2018 turned out to be a heart-wrenching time for Harris County Sheriff Ed Gonzalez.
A Houston native, Gonzalez was a longtime homicide detective who served three terms as a city council member. In 2016, he was elected sheriff of the state’s most populous county, with 4.6 million residents.
Before noon last Sunday, Gonzalez tweeted, “Heartbreaking weekend in Harris County. @HCSOTexas has investigated the following: a 2 year old & 17 year old dying from car crashes. And a 7 year old shooting victim. Gone to soon. May they Rest In Peace and the Lord bring comfort to the families.”
The sheriff’s office initially described the shooter as a bearded white male, possibly in his 40s, who was wearing a red hoodie.
It was unclear whether the shooting was random or targeted. Gonzalez told reporters that investigators believe “it was totally unprovoked.” They don’t know whether the gunman yelled anything at his victims when he pulled the trigger.
“There was nothing to indicate that the family did anything wrong in any way,” he said.
“They were simply just driving along the service road when this happened to them.”
Washington says she believes race played a role. The white pickup driver could clearly see “a black mother with four beautiful children, girls, in this car,” she said.
Investigators released an enhanced surveillance video of the extended-cab pickup and urged residents to call with leads. They asked people with access to surveillance camera around Wallisville Road and E. Sam Houston Parkway to check their footage. Tips have poured in but the shooter remains on the loose.
A sketch of the suspect was compiled from descriptions from Jazmine’s mother and three sisters. It showed a white man in his 40s with a 5 o’clock shadow and a hoodie. 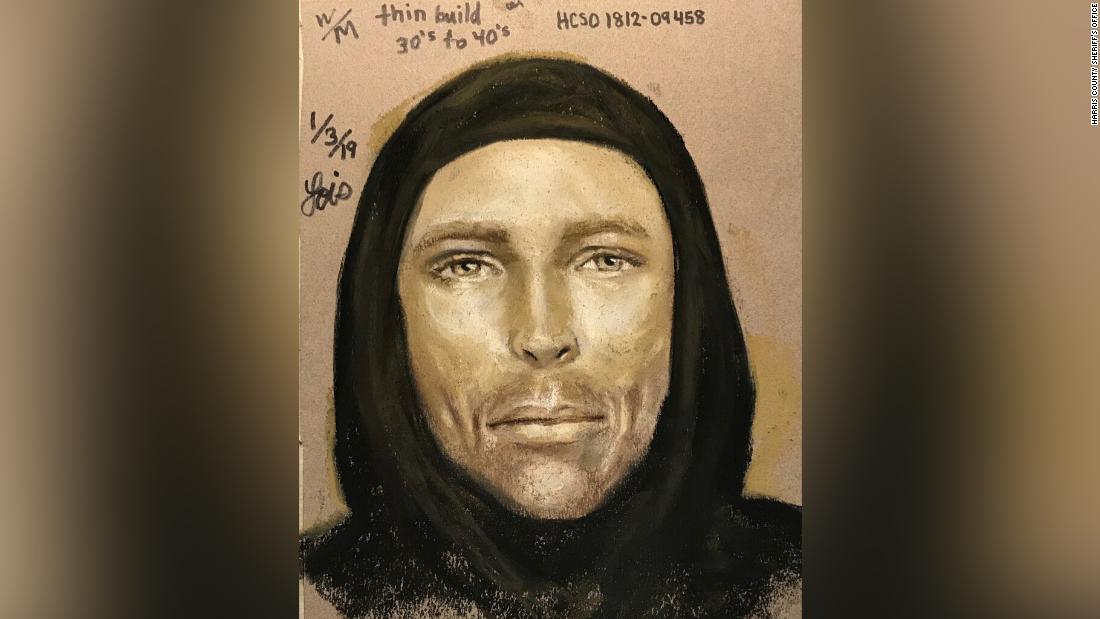 “We’re not going to rest until we find justice for Jazmine,” Gonzalez said.
The sheriff said he never met Jazmine but was struck by the “million-dollar” smile in her photos.
“Please keep this family in your prayers,” he wrote in a Facebook post. “A total of 5 occupants in the car witnessed this child, their loved one, shot and killed before their eyes. So senseless. It’s never easy, and extra hard during the holiday season.”

‘These people are hurting’ 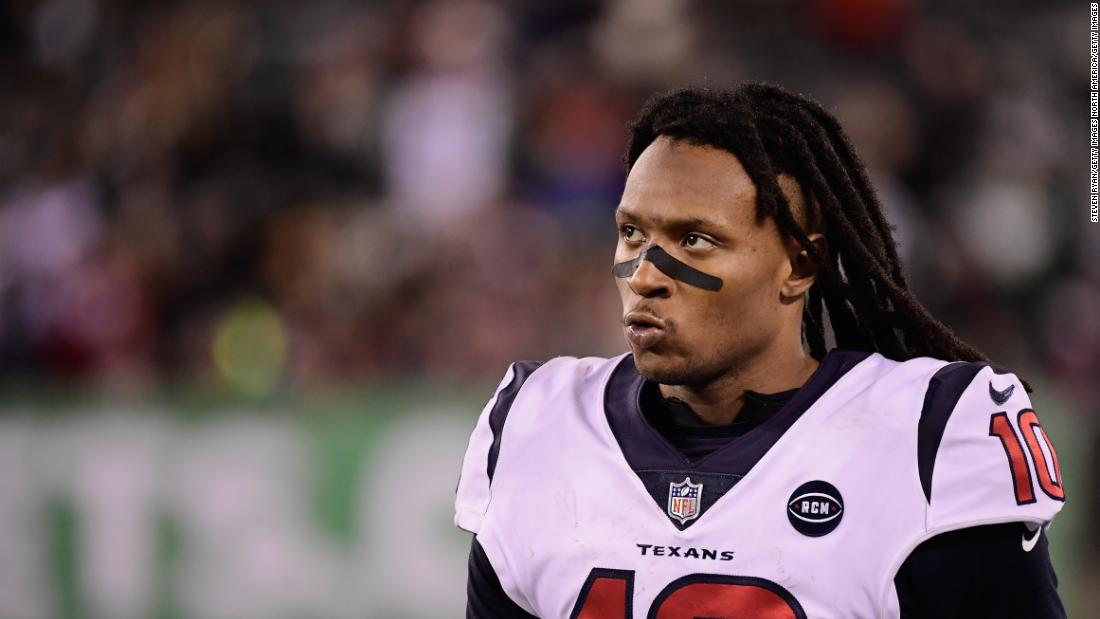 Jazmine’s death on the second-to-last day of 2018 united the Houston area in grief and drew national attention.
Social activist Shaun King and civil rights attorney S. Lee Merritt offered a $100,000 reward for information leading to a break in the case.
Merritt headed to Houston to serve as an adviser to Jazmine’s family. He represents the family of Botham Shem Jean, an accountant who was killed in his apartment by a Dallas police officer.
“I have to sit with a lot of families who are going through the most tragic event that any of us can imagine,” he said. “These people are hurting.”
NFL star DeAndre Hopkins knows no money can make up for the loss of a child, but the star Houston Texans receiver is donating his playoff game check to Jazmine’s family as a demonstration of the community support for them.
Hopkins was to make $29,000 for Saturday’s AFC Wild Card game against the Indianapolis Colts in Houston.
“That could have been anyone in my family,” said Hopkins, who tweeted this week that Jazmine reminded him of his own 5-year-old daughter.
“Just trying to be a light, trying to help out the best way I can,” he said.
More than 2,400 donors have contributed to a GoFundMe account for Jazmine’s funeral expenses and to support of her family.
“They are not alone,” Hopkins, 26, said of Jazmine’s family. “The city supports them, a lot of people in America supports them and a lot of people are praying for them.”
Saturday, hundreds attended a rally outside the Walmart near the road where Jazmine was killed. Washington told the crowd Jazmine would have celebrated her birthday next month.
“I’m telling you, every time I see one of y’all reach out for me, I can hold my head up,” she said. “I can get up in the morning.”
“Who’s child? Our child,” the crowd chanted.
US Rep. Sheila Jackson Lee, whose district includes part of Houston, said Jazmine was “everyone’s child” and asked that federal resources and law enforcement be assigned to the hunt for her killer.
“She is the nation’s child,” she told the crowd. “She is seen around the world.”
Jazmine will also be remembered Tuesday during a “Justice for Jazmine Barnes Community Rally” honoring “all murdered victims in Houston/Harris County,” according to organizers.
Services for Jazmine are scheduled to begin at 10 a.m. Tuesday with a viewing at Green House International Church. Her funeral is at noon. Mourners plan to release purple balloons — Jazmine’s favorite color.

‘She loved the world’ 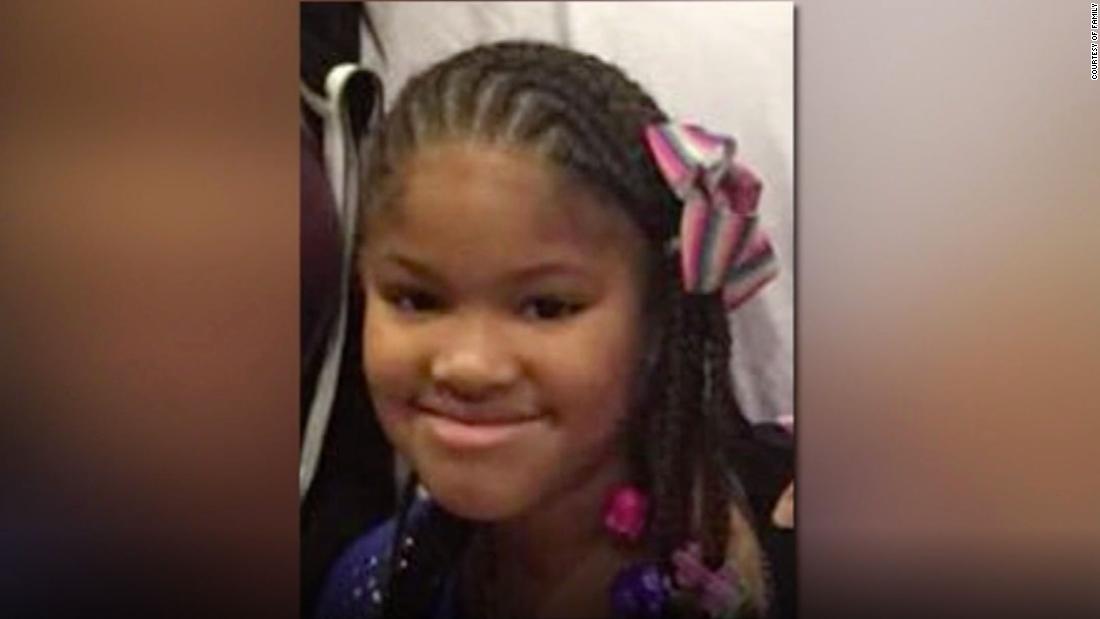 Jazmine’s father, Christopher Cevilla, this week thanked the countless supporters. He appealed to the public for information about the attack.
“I just want anybody, whoever, out there that knows anything about the murder of my daughter, to just please step up as if it was your own,” he said. “Just put yourself in my shoes, in my family’s shoes.”
Her hand in a sling, Washington managed an occasional laugh as she remembered her daughter at home this week.
Jazmine was her “love child,” who would hug and kiss everyone. Washington often warned her about hugging strangers.
“She didn’t’ care,” her mother said. “She loved the world.”
Jazmine used to dress up in her mother’s clothes.
“Mama, I want to be like you,” Jazmine would tell her.
Her favorite song was “Wake up in the Sky” by Bruno Mars. She also liked Gucci Mane and Kodak Black. In the back seat of the car, Jazmine used to sing louder than the radio — and her sisters.
“I swear, they keep me on my toes 24/7,” Washington said of the girls. “They’re so amazing. We’re missing our set.”
At Monahan Elementary School, Jazmine’s teachers “love her so much,” her mother said. A week before she died, Jazmine told her mother she wanted to be a teacher.
“That’s all they used to play, was school,” Cevilla said.
At home, Jazmine created make-believe classrooms. Her mother played the principal.
“That’s what she wanted,” Washington sobbed. “She didn’t even get to live her life.”
Washington’s youngest, the 6-year-old who witnessed her sister’s fatal shooting, drew a picture this week of her and Jazmine playing.
“It’s like, what can I say to her, what can I do for her?” Washington asked, sobbing again. “I don’t know what to do because I can’t even fix myself.”