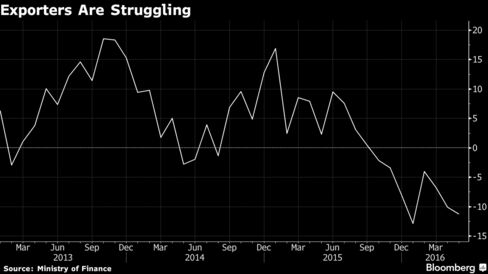 Japans exports fell for an eighth consecutive month in May as shipments to China, the U.S. and Europe slumped, undermining Prime Minister Shinzo Abes efforts to revive the economy.

Overseas shipments declined 11.3 percent in May from a year earlier, the Ministry of Finance said on Monday. The median estimate of economists surveyed by Bloomberg was for a 10 percent drop. Imports fell 13.8 percent, leaving a trade deficit of 40.7 billion yen ($389 million).

Japans modest economic gains this year are at risk as a slowdown in overseas demand and the yens surge make the nations products less appealing overseas and hurts the earnings of exporters. Finance Minister Taro Aso escalated his concern the yen on Friday, calling for coordination with his overseas counterparts to address what he described as disorderly moves in the currency market.

Exports are still weak as overseas demand remains dull and the effects of the weak yen last year are dissipating, Atsushi Takeda, an economist at Itochu Corp. in Tokyo, said before the report was released. With the Brexit vote coming up and expectations over Fed rate hikes weakening, the yens appreciation could be prolonged, increasing downside risks to Japans economy.

While the yen slipped 3.8 percent in May, its jumped 15 percent this year against the dollar. The yen rallied to the strongest level since August 2014 last week after the Bank of Japan left monetary policy unchanged.

The currency traded at 104.68 against the dollar at 9:21 a.m. in Tokyo, 0.5 percent lower. The Topix index of stocks was up 2.3 percent after dropping for the last three weeks.

Aso said on June 17 that he was very concerned about one-sided, abrupt, and speculative moves in the currency market. Toyota Motor Corp. has warned that annual net income will probably decline for the first time in five years, due to the stronger currency.

‘Out of sight’: Trump confirms USS John McCain was hidden from his view