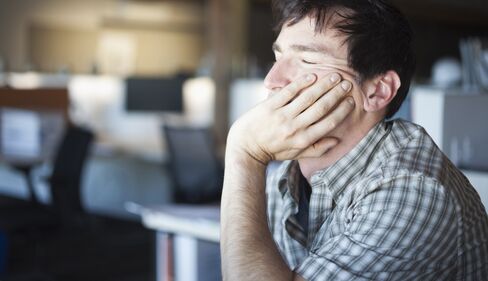 “There’s really no set schedule,” said Piha, the director of communications at home-improvement startup Porch, which lets its employees work flexible schedules. Piha likes to get in “super early” and leave at 3 p.m. for a workout class.

“I just like to be able to do my work when it needs to be done,” she said. “I will never not hit deadlines and deliver.”

That’s how it should be for all of us whose jobs aren’t shift-basedthat is, for the 42 percent of the workforce who, according to the Bureau of Labor Statistics, don’t work hourly wage jobs. We should decide how and when to get our work doneyet so many of us are stuck on the clock.

“Our culture in the U.S. is rooted what I call an hours mentality,” said Carol Sladek, a partner at the human resource consulting firm Aon-Hewitt. “And by that I mean schedulingreally driven by shift workthat doesn’t make sense in most of our service-based industries.”

The 9-to-5 schedule doesn’t conform to most people’s lives, or their workflows. Sitting in a chair for eight hours straight doesn’t produce results; many studies have established the benefits of taking breaks during work. And the best hours for productivity vary from person to person. Not everyone is a morning person. One study found sleep deprivation costs employers an average of $2,000 a year per worker; other research suggests cognition peaks in the later afternoon.

Workers also find schedules dogmatic. We’re adults, and we like autonomy over our lives.

“In previous places where I’ve worked, you want to make a first impression. You want to be first person in, last one out,” said Alexa Scordato, a vice president of marketing at Stack Overflow, a message board for programmers. She also can pick and choose her work schedule. “That’s really broken and really flawed.”

More than half of employees surveyed by the Society of Human Resource Management cited flexibility as a “very important” aspect of job satisfaction in this year’s Employee Satisfaction & Engagement Report. The share of households with two working parents has risen nearly 50 percent since 1970, according to a Pew survey from last yearyet workplace structure by and large hasn’t changed to adapt to the new norm. That same survey found that almost a third of parents who say they have difficulty balancing work and family life also find parenting stressful all or most of that time.

“The last thing [employees] want to do is work for a company with rigid schedules, where they’re expected to be in a cubicle from 9:00 to 5:00,” said Lisa Horn, who heads up SHRM’s workplace flexibility initiative. “That’s the opposite of what they’re looking for.”

And employers care what workers want, because it leads to higher engagement and retention and helps with recruiting.

Many improvements on the standard 9-to-5 work schedule are measured in time, such as the four-day week or the six-hour day. The case for such an alternative, still rigorously scheduled, is that it’s more humane and makes employees happier and more productive.

Indeed, research suggests working fewer hours in a given day or week can improve productivity and health and boost employee-retention rates. This year, a study in Sweden found that nurses who traded eight-hour shifts for six-hour ones took fewer sick days and thus provided better care. Another study found that people who worked 55 hours a week performed worse on cognitive tests than those who worked 40 hours.

But such alternatives to the traditional 9 to 5 still measure workers’ efficiency in hours, allowing for little flexibility.

“I am not convinced that kind of schedule is beneficial for employees or for businesses,” wrote Allard Dembe, a public health professor at Ohio State University, in a post this month on the Conversation, an online news and commentary site. “The primary problem with the idea is that whatever work needs to be done needs to get done in the same amount of total time. Despite wishes to the contrary, there are still only 24 hours in a day.”

Often the four-day week means working 10-hour days, or longer, in exchange for a free Friday. That still adds up to 40-plus-hour work weeks, even if it makes for a longer weekend. And Dembe’s research has found that working long hourswhether over a day, week, month, or yearbrings risks of health problems such as heart disease, cancer, arthritis, and diabetes.

And flexibility seems to scare some employers. Yahoo’s Marissa Mayer famously banned working from home, in a bid to turn around the flailing company. Best Buy abandoned its work-wherever-and-whenever policy in 2013 as it faced financial struggles under new management. “It’s all hands on deck,” a spokesman said at that time. “That means having employees in the office as much as possible to collaborate and connect on ways to improve our business.”

Employees, too, might worry that with no set schedule, they might effectively be expected to work all the timeor respond to e-mails at the whims of somebody else’s weird schedule.

But research published earlier this year outlined a possible way to make flexibility work for both employees and employers.

In that study, around 500 workers at an unnamed Fortune 500 company were given no set schedules. Some got in later; others left midday. Their schedules varied from day to day. They didn’t work fewer hours, just different ones that better fit their lives. The system hinged on ongoing communication about how people worked; for months, facilitators led meetings with employees and their managers about how to get work done with varying schedules.

The employees who participated said their overall well-being improved, a feeling the researchers attributed to their having a sense of control over their lives. The quality of their work didn’t suffer, either, the researchers found.

If that sounds too extreme, employers might give workers a little wiggle room at the ends of their days. All we really want is a little controland to make that 6 o’clock yoga class once in a while.

Related: Four Ways to Nap at Your Desk

Deutsche Bank Returns to Haunt Merkel in an Election Year

The Nation’s First Soda Tax Is Working. Can Its Success Last?

Do soda taxes work? Experts look to Mexico for answers

Even for the GOP, Parts of Obamacare Should Be Worth Saving