Men are facing a fertility crisis, so why is most practical and emotional support offered to couples struggling to conceive aimed at women? 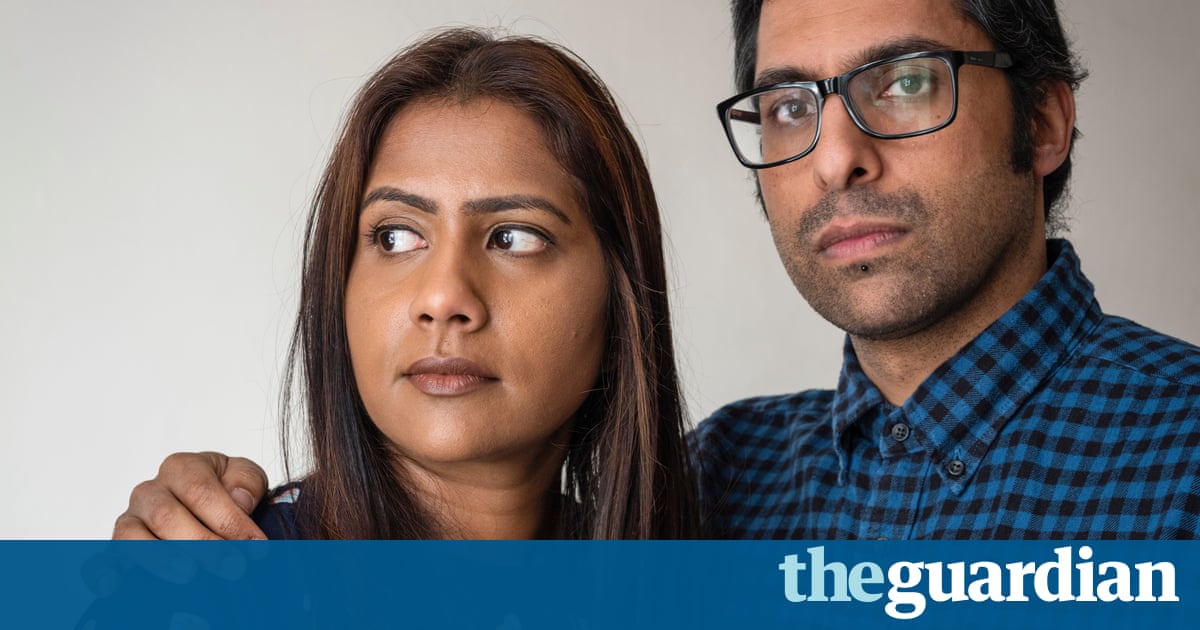 James and Davina D’Souza met and fell in love in their early 20s. They got married five years later, and three years afterwards had saved enough to buy a family home in a quiet cul-de-sac in London. Then, when Davina was 29 and James 33, they started trying for a baby.

“I knew that the moment we bought a home, we’d start a family,” Davina tells me in their living room, beside shelves crammed with framed photos of nieces, nephews, cousins and siblings. “My parents live down the road, and if I needed help to raise a child, my mum would be here.”

“We thought about all of that stuff,” James adds. “The job, the future, the house, the home: we make things happen.”

But after a year of trying, nothing had happened. Davina went to their GP, who referred her for the kind of invasive tests that have become the norm for women who experience problems conceiving: she had an internal, transvaginal scan to check her womb for fibroids, and an HSG test, where dye was pushed into her fallopian tubes to see if they were blocked. Everything looked normal.

It was only then that anyone suggested testing James. He had his semen analysed, and was told that only 1% of his sperm were formed normally. Still, it only takes one, the consultant said. She told them not to worry and to carry on trying. Two years after Davina came off the pill, James was tested again. This time, he had no normally formed sperm at all.

“My first thought was, ‘Oh, it’s my fault,’” James says, quietly. He stares at the coffee table through his thick-framed glasses. “I felt helpless. No one was talking about this stuff. You’d go online and there was no male conversation. I’d Google ‘problems having a baby’ or ‘fertility issues’, and the websites that came up were all pink. I’d post in a forum and women would respond on behalf of their husbands. There was nothing for men.”

Though he may have felt it, James is not alone. Across the western world, men are facing a fertility crisis. A landmark study by the Hebrew University of Jerusalem, published in July, showed that among men from Europe, North America and Australia, sperm counts have declined by almost 60% in less than 40 years. Fertility specialists have described it as the most robust study of its kind (the researchers came to their conclusions after reviewing 185 previous studies involving 43,000 men from across the globe) and the findings are stark. Such a significant decline in male reproductive health over a relatively short period in such a specific population suggests there’s something in the way we live now that means it’s much harder for men to become fathers than a generation ago.

Until recently, the focus of both fertility experts and research scientists has been overwhelmingly on women’s bodies, while male reproductive health has been almost ignored. For decades, the average age of both fathers and mothers has been increasing, but it’s women who have felt the pressure of balancing the need to invest in their careers with the so-called “timebomb” of their own declining fertility. They have been encouraged to put family first and to change their lifestyles if they want to become mothers, at the same time as male fertility appears to have fallen off a cliff.

Davina says the consultant gynaecologist who was treating her and James had no hesitation about next steps. “She said, ‘James’s sperm results are in, and we think you should go for IVF.’ That was it. The NHS didn’t have any other options for us.” Indeed, the NHS couldn’t even fund any IVF in their area at that time, so they had to scrape the money together to go private. They spent more than £12,000 on two rounds of IVF, and were finally offered a third round on the NHS this year. But after nearly seven years of trying for a baby, they are still childless.

“IVF takes a huge physical, hormonal and emotional toll – on a woman,” James tells me. “Sometimes I felt totally powerless, ineffective. I questioned my masculinity, my sense of myself as a man, through those rounds of IVF.” During consultations, James felt the conversations were always directed at Davina. “I felt like I had to say, ‘I’m here.’ I’d deliberately ask a question to make my presence felt.”

On their first round of IVF, someone at the clinic recommended James take a vitamin supplement. It was the first time lifestyle factors had been mentioned. “That was when I realised, maybe there is something I can do,” he says between slurps of his own blend of bulletproof coffee (made with grass-fed butter, coconut oil and egg yolk). James, head of sixth form at a local school, is a fan of self-help books. He’s been on a high-fat, low-carbohydrate ketogenic diet for months and says it’s done him good: he’s slim and spry, but says he wasn’t always this way. He’s wearing a digital fitness tracker. But as someone who rarely drinks, has never smoked and doesn’t ride a bike, there were few lifestyle changes he could make, beyond taking colder showers and wearing looser underwear. Still, his sperm quality has improved.

At the moment, the couple’s fertility problems are unexplained. They decided against adoption when social workers said they’d have to use contraception during the process, because it wouldn’t be fair on an adopted child to move into a home with a new baby, and they aren’t prepared to stop trying just yet.

“We’ve talked about when we’re going to call it a day,” James says.

Davina glances at him with wet eyes. “It makes me sad to think we’ll be putting a cap on it.”

“But it regularly comes up,” he says. “We did actually say at the end of this year we’ll stop. I’ve been asking, ‘Why do we want to have children?’ We’ve decided it isn’t going to define us.”

“There is treatment for male infertility, but it’s certainly not in the fertility clinic,” says Sheryl Homa, scientific director of Andrology Solutions, the only clinic licensed by the Human Fertilisation & Embryology Authority to focus purely on male reproductive health in the UK. “Men are channelled from their GP with a semen analysis and sent straight to a gynaecologist in an IVF clinic. But gynaecologists are interested in the female reproductive tract.”

A former clinical embryologist, Homa once led IVF laboratories in both the private and public sectors. “I was quite horrified by the lack of investigation and appropriate management of male infertility,” she says, “so I decided to start my own clinic specifically to focus on male fertility diagnosis and investigation.” Male reproductive health is being assessed through semen analysis, which she argues has “a very poor correlation” with fertility. Instead of having their detailed medical history taken and a full physical examination, men are being given a cup and asked to produce a sample.

Homa says the leading cause of male infertility (around 40%) is varicocele (a clump of varicose veins in the testes). “It can be determined from a physical exam, and can certainly be ruled out by an ultrasound scan. All women get ultrasound scans; why aren’t men getting them?”

Varicoceles can be repaired by fairly simple surgery under local or general anaesthetic, leading to a significant improvement in a couple’s chances of successful natural or assisted conception. But many are going undiagnosed. “The NHS is carrying out far too many IVF treatments when they could be saving money by doing proper investigations in men.”

Homa says there is also some evidence linking “silent infections” – those with no symptoms, such as chlamydia in men – with delayed conception and an increased risk of miscarriage. But if a man is judged by his semen sample alone, there would be no way of addressing these hidden concerns.

Apart from saving the NHS money, there are important medical reasons why men should be thoroughly examined, Homa argues. “Semen parameters are a marker of underlying systemic illness: they might have diabetes, they might have kidney disease, they might have cardiac problems. It could be something much more serious that’s contributing to the problem.”

As for the possible reasons for falling sperm counts across the west, Homa mentions “all the chemicals and pesticides that we are exposed to in our environment”, as well as smoking, rising levels of obesity and increasingly sedentary lifestyles. But at the moment, ideas such as these – including hormones in the water and BPA in plastics that might mimic the effect of oestrogen inside the body – are just theories that make intuitive sense. In the absence of widespread research over time, no one can pinpoint exactly which factor or combination of factors is making the difference.

In the 10 years her clinic has been operating, Homa has seen demand for her services steadily rise. She says she gets “the fallout” from men who’ve been sent by their GP for multiple rounds of fertility treatments that fail, when IVF should be the last resort. But at the moment, National Institute for Health and Care Excellence (Nice) guidelines give GPs no option but to refer men with fertility problems to IVF clinics. “If there’s a female problem, the GP will refer them to a gynaecology clinic. If there’s a male problem, they need to be referring to a consultant urologist who deals with male infertility. But it’s just not happening.”