Beyond whipping up the best caramel macchiatos and pumpkin spice lattes on this side of eternity, Starbucks is also known as a place where humanity shines at its finest. From the barista whose one-word message stopped a customer’s suicide to the deaf woman who received this special drive-thru surprise, America’s favorite coffee shop is home to some of the most beautiful acts of kindness.

And one of those heartwarming moments unfolded yet again at the Winston-Salem Starbucks in North Carolina just last month.

According to a report by TODAY, barista Shantaphae Blakes called her shift supervisor Harper Spell in tears when she realized she wasn’t going to be able to find a babysitter for her daughter, Dilynn, that day. It was 4:30 in the morning and she was ready for work, but the frantic single mother had nobody to care for her toddler.

Knowing she desperately needed to work this shift in order to pay the bills and provide for Dilynn, she was PANICKED.

“All my motherly instincts kicked in that morning,” said Blakes. “I just thought I can’t leave her and I have to make money to keep a roof over Dilynn’s head.”

Spell, her 21-year-old supervisor, could sense the angst and desperation in Blakes’ voice.

“She was so upset,” Spell told TODAY. “(Blakes) said, ‘I have Dilynn in the back seat. Would it be OK if I came?’ I just said, ‘Don’t worry about it. I need you here. We’ll take care of Dilynn.”

Beyond relieved by her boss’s flexibility, the 26-year-old hurried into work with her daughter in tow and set her baby carrier on a cafe table as they opened the store. Spell, dubbed Dilynn’s “second mom” for the shift, kept a close watch on the wide-eyed little girl who waited patiently without a fuss.

“She was just wide-eyed, watching us,” says Spell. “We gave her a few little things to play with, something to eat, and she was good.”

But even though the duo opened the coffee shop with a breeze, they knew the morning rush could pose a different challenge, as toddlers only stay content for so long.

That’s when this totally inspiring story got an even sweeter twist.

When North Carolina State Trooper Brad Marsh waltzed in for his morning cup of joe, he quickly took note of the multi-tasking mamas in need of a hand.

Without a second thought, the kind-hearted cop who has a young daughter of his own stepped in to help.

Shortly after, one of his partners came to aid him with the impromptu babysitting gig. 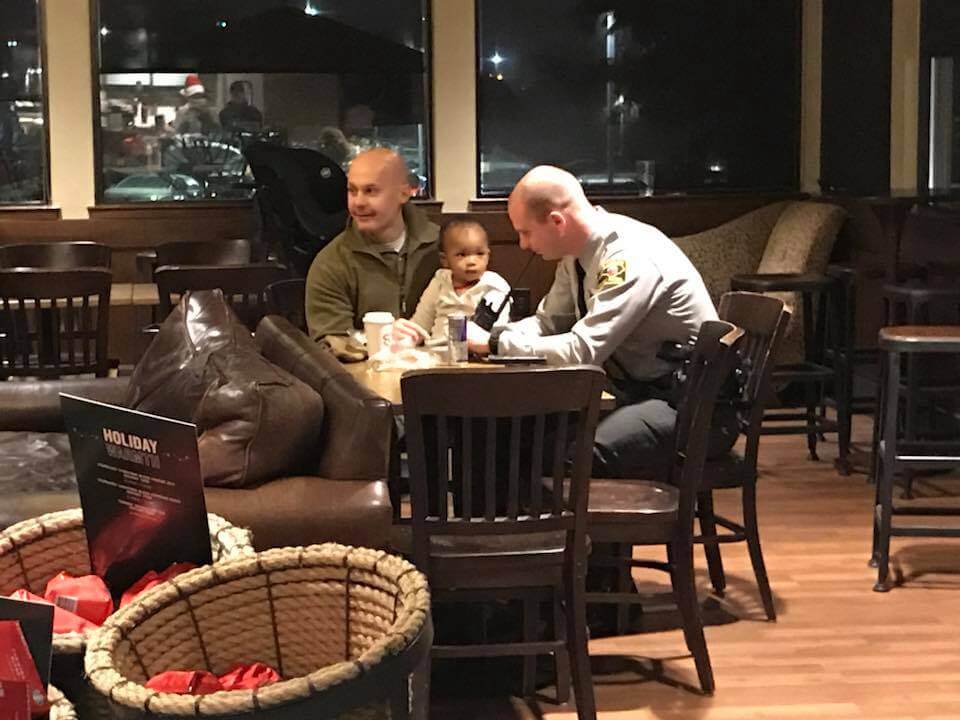 “’Trooper Brad’ came in and he offered to sit with Dilynn while we worked,” said Spell. “He stayed for over an hour. Never in a million years did I think that (a trooper) would just do that—just stay and hang around and help.” 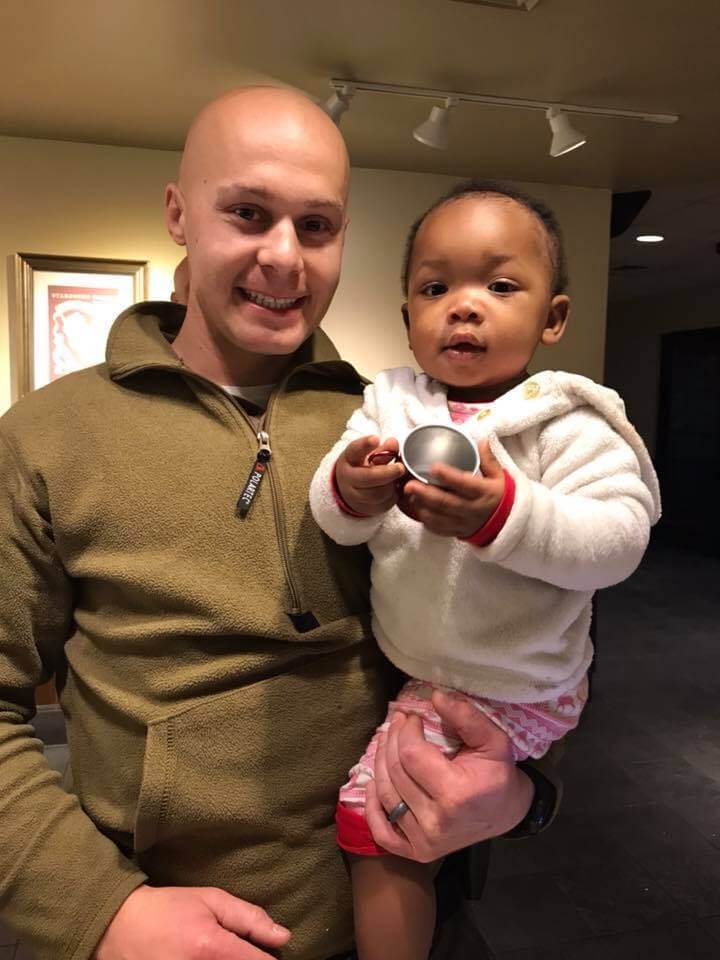 “Trooper Brad and one of his fellow partners were outstanding in making sure we could still get our job done and even had a little fun with it,” Spell shared on Facebook.

“He even bought her a cup that she had been holding on to all morning.” 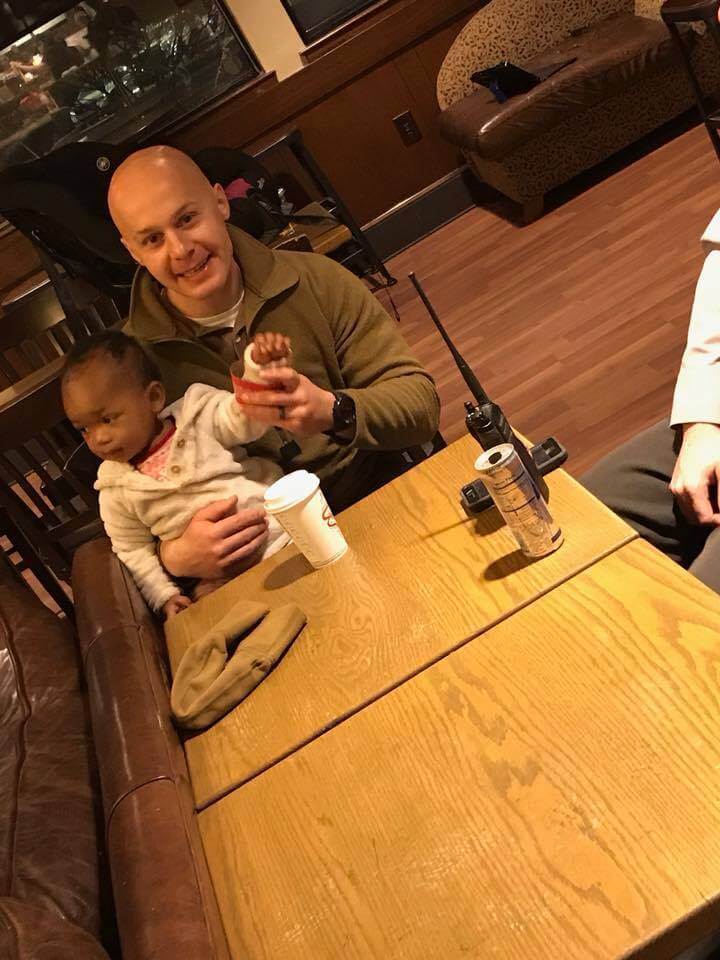 The officers’ selfless effort to go above and beyond the call of duty left Blakes overwhelmed with gratitude and emotion.

“It just blew me away,” she said through tears. “It was wonderful. It shocked me. It made me feel so much better.” 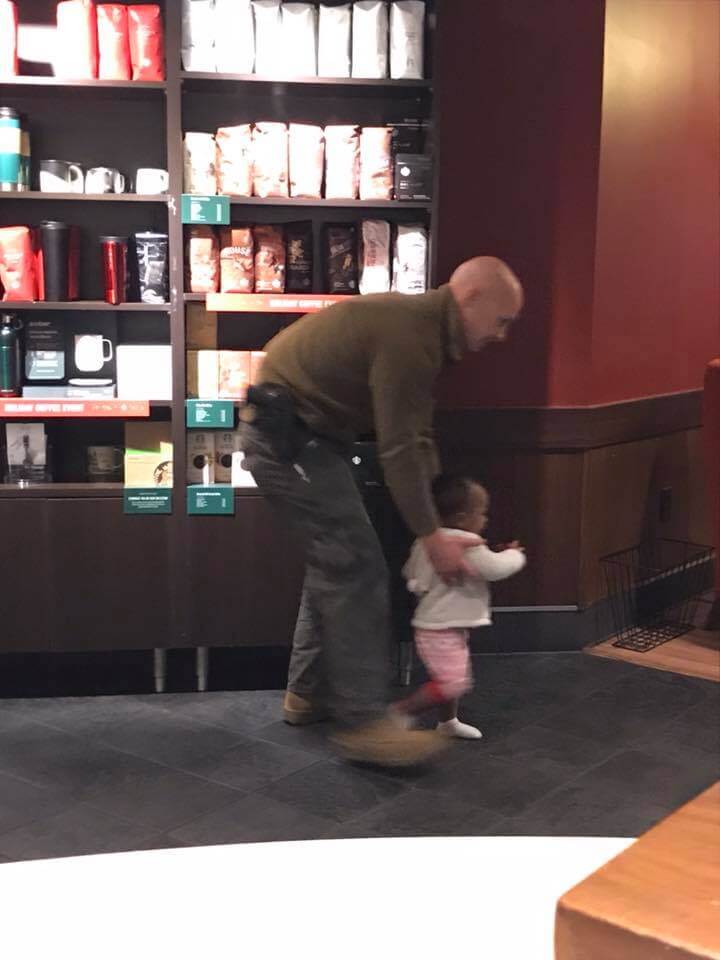 Spell later shared her account of the day’s inspiring chain of events, along with special thanks to the NC State Troopers on Facebook. Her post has since made waves across the Internet:

I wanted to send a special shoutout to our very own North Carolina State Highway Patrol. This was the sight at my…

“It made my heart melt to see this unfold today,” wrote Spell. “Thank you, Brad and NC State Troopers everywhere, you guys rock!

As for Blakes, it’s an act of service seared on this thankful mother’s heart forever.

“When Shantaphae was able to leave later that morning, she went over and was crying,” said her manager. “She thanked (Marshall) a million times.”

Blakes sums up the emotional experience with just two words:

“I’m honestly blessed to have the Starbucks family.”

But Mommy, You Were Too Busy