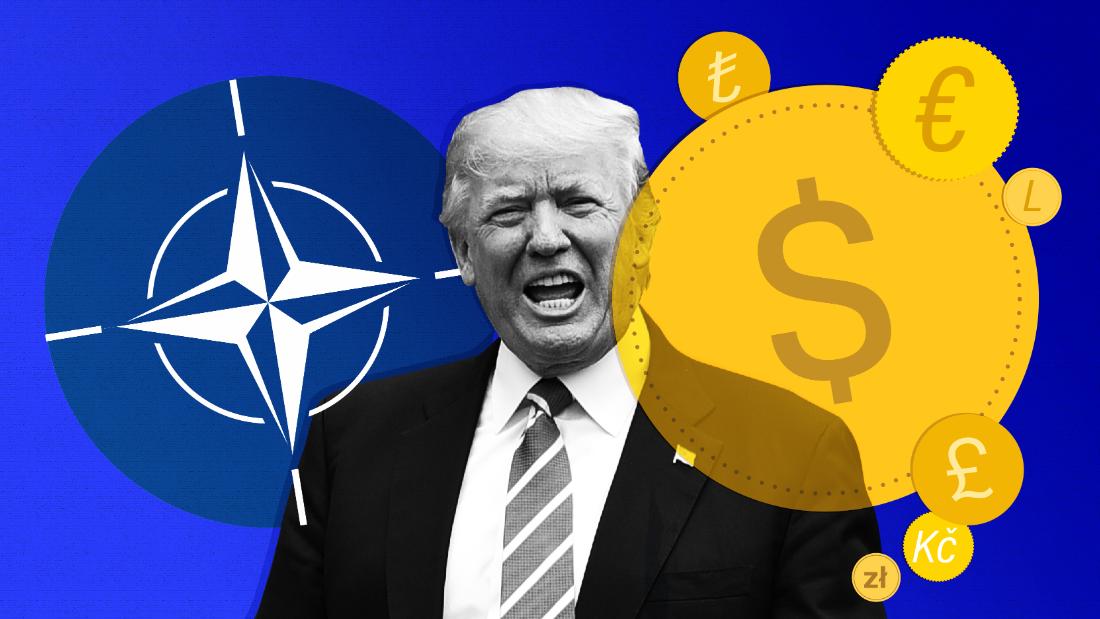 (CNN)US President Donald Trump has arrived in Brussels with a clear message: NATO members must hike their defense spending and they must do it now.

He has a point. The US spent more than 3.5% of its GDP on defense last year, and far more in previous years, while only three other member nations — the UK, Greece and Estonia — passed the 2% threshold last year, NATO data shows. Poland slipped in 2017 below the benchmark to 1.99%.
“I think these countries have to step it up, not over a 10-year period, but they have to step it up immediately,” Trump said in Brussels on Wednesday, on day one of the summit. NATO allies in 2014 agreed to try and reach their 2% target over a decade, by 2024, too long a time frame for Trump. He pointed specifically to Germany as a wealthy nation that could boost spending now.
There was never any doubt Trump would come down hard on his mostly European allies in the 29-member alliance. He has spent recent days on Twitter slamming NATO as “very unfair.”
A White House spokesman made clear last week the President will tell NATO that the US is not the world’s piggy bank.

Is the 2% threshold reasonable?

While the 2% threshold has eluded some members — whom Trump has slammed as “delinquents” — most have boosted their spending in real-dollar figures in recent years.
NATO was formed after World War II and on the principle of collective defense — an attack against one or more members is considered an attack against all. Each nation puts very little money in a NATO pot of funds. The idea is that each nation should have its own strong defense force, which requires a certain level of spending by individual members.
Trump is not the first US president to point this out.
“Lots of American presidents and administrations have made that point and pleaded with allies to increase spending. They just did it more politely,” Elisabeth Braw, adjunct fellow from the Center for European Policy Analysis, told CNN.
Defense expenditure had largely dropped at the beginning of the decade, because Europe was relatively peaceful.
But following Russia’s aggression in Ukraine and its annexation of the Crimean peninsula, all NATO members agreed in 2014 to reach the 2% threshold by 2024.
Trump has taken on a threatening tone ahead of the Brussels meeting, sending a series of letters to NATO allies, including Germany, Belgium and Canada, demanding they boost spending and threatening to shift the US military presence in Europe if they do not. The letters were first reported in The New York Times.
“I think Trump does have a point, but I think the way in which he’s making his point is very unhelpful, because he’s so unpopular here in Europe. If he bullies European leaders into spending more domestically, I think it would be foolish for them to spend as much as he wants them to because they will be seen as essentially just obeying his commands,” Braw said.
She added that US Defense Secretary James Mattis, for example, could have made the case.
“He enjoys wide respect among allies — but it seems to have almost become an obsession for Trump, and paradoxically I think it would lead to smaller increases, and that is very unfortunate, because it’s clear the security situation is deteriorating in Europe.”
Braw said, however, that expecting defense spending at 2% of GDP is largely reasonable.
“The idea is that every country should have strong armed forces on its own, so that NATO really just is for common defense — it shouldn’t be that there are free riders who spend almost nothing but say, ‘I’m a member of an alliance.'”

What does the US get out of NATO?

But Braw and other experts also acknowledge there is more than financial value to NATO. The alliance allows the US to have a strong foothold in Europe, a presence that has traditionally helped it counter Russia’s influence in the region.
It also allows the US to launch military action in other regions, mainly the Middle East, Africa and South Asia.
In Germany alone, the US has 152 military sites for its army and air force, US Defense Department data from 2017 shows. The US’ largest military hospital abroad is in Germany, and it uses bases in the country as “lily pads” to go back and forth from countries like Afghanistan.
The US also has six nuclear stockpiles in five European NATO countries — Germany, Belgium, Italy, the Netherlands and Turkey — according to the Federation of American Scientists. It also stores tanks and artillery in Norwegian caves.
Karen von Hippel, director-general of the Royal United Service Institute (RUSI), points to other nonfinancial benefits to the US being in NATO, such as support in times of conflict.
“I don’t think he understands what alliances are — everything is, ‘What are you going to give me and what am I going to get out of it?'” she said.
“I don’t think he understands all the other things that come with alliances, whether it’s your friends fighting in wars for you and losing lives. I mean, don’t forget, many countries went to Iraq and Afghanistan and many, many soldiers were killed from all these countries, and it was not their war, it was an American war really, more than anything else. And so alliances are a lot more than the balance sheet, and I don’t think he fully understands that.”

What does this mean for Russia?

NATO was founded partly in response to the threat by the Soviet Union after the war. It has also been used as show of unity and strength against Russia in the region more recently.
Moscow and Russian President Vladimir Putin, however, often say NATO is the aggressor, and bemoan NATO military exercises on Russia’s doorstep. NATO is also a painful reminder of the territory the Soviet Union lost, as Moscow watches countries it once ruled over join an alliance that was built to oppose it.
There is concern that Trump’s decision to meet with Putin right after attending the NATO summit and taking a trip to the UK, a key NATO member, spells trouble for the alliance.
Few think Trump will pull the US out altogether, but there are concerns that as NATO’s most powerful member, a US too close to Russia could complicate the alliance’s raison d’être to a degree.
“Putin is emboldened pretty much with or without Trump. We’ve seen that over the last few years. But Trump seems to be doing everything Putin wants him to do and why he is doing that is still a mystery to many people, including many people in Trump’s own government,” von Hippel said.
“Of course, he will be coming to the UK just after that meeting as well, and meeting with the Prime Minister here, and you know, this country is very committed to NATO. And if he really does drop a bombshell, that will obviously impact the visit here, and then of course who knows what will happen with Putin?”