After the band denounced George W Bush, the country establishment turned against them. Now theyre touring the US again in an even more divided environment 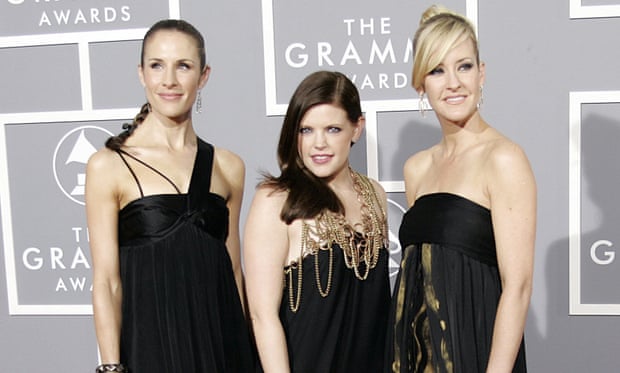 After a nearly decade-long hiatus, the Dixie Chicks are finally ready to tour the US once again. On Monday, the country supergroup announced an American leg of their upcoming jaunt, which will kick off next year in Europe and arrive in Cincinnati, Ohio, on 1 June for a run of more than 40 dates in North America. The Dixie Chicks Emily Robison, Martie Maguire, and lead singer Natalie Maines have performed sporadically at various events over the past few years, but this tour marks their first string of headlining shows in the US since 2006, when they hit the road in support of their album Taking the Long Way, a collection recorded in the wake of Mainess comments about George W Bush and the Iraq war, which put the women at the center of a massive political firestorm.

Oh, you dont remember? Well, in case you blocked the whole controversy from your mind (and who could blame you?), heres a refresher. While performing in London in March 2003, just nine days before the US invasion of Iraq, Maines told the crowd: Just so you know, were on the good side with yall. We do not want this war, this violence, and were ashamed that the president of the United States is from Texas.

Almost immediately, Mainess statement proved explosive in the country music world, which has traditionally presented and continues to present a proudly patriotic front. In fact, tributes to American soldiers have become so commonplace in country music over the past 20 years that, these days, it almost sounds normal for Cole Swindell to randomly proclaim, Im raisin my glass to those savin our ass overseas! in the middle of a derivative breakup song.

At the time of Mainess quote, though, not even two years after the 9/11 attacks, country music was particularly steeped in earnestly patriotic drum-banging. Toby Keiths Courtesy of the Red, White and Blue, on which he promised, Youll be sorry that you messed with the US of A/ Cause well put a boot in your ass its the American way, became his career-defining hit in 2002. And in 2003, just weeks after Mainess comment, Daryl Worleys Have You Forgotten?, which urged listeners to remember the shock that they first felt about the terrorist acts, stayed on top of Billboards Hot Country Songs chart for seven weeks. This was, of course, before doubt had set in about Americas presence in the Middle East, and Maines was seen as downright traitorous by many country fans for not voicing support for Bush and his war on terror.

The response from the country music establishment was swift: in one week, the Dixie Chicks single Landslide plummeted from 10 to 43 on the Hot 100, falling off the chart after that. A throng of ex-fans met in a parking lot and crushed their old Dixie Chicks CDs with a bulldozer. The band immediately lost their promotional deal with Lipton. DJs on many country stations were prohibited from playing their music at all, and two Colorado DJs were suspended for doing so. Despite the groups attempts to alleviate the fallout with a PR campaign, the damage had already been done. The Dixie Chicks, the single bestselling female group of all time, had been blackballed by country music overnight.

In 2006, the Dixie Chicks released a pop-rock album called Taking the Long Way, which featured the unapologetic single Not Ready to Make Nice. The album won them critical acclaim and a Grammy in 2007, but its sales paled in comparison to their previous efforts, and country radio wouldnt touch it with a 10-foot pole. And after the release of their documentary, Shut Up and Sing, the Dixie Chicks werent ready to make much of anything for a while. Maguire and Robison released two albums as a duo called Court Yard Hounds, but Maines, always the spark plug of the trio, kept a lower profile. Its hard to blame her.

But now the Dixie Chicks are making their comeback in what is arguably an even more politically divisive time than a decade ago. The conservative/liberal divide remains vitriolic and unhelpful as the US continues to debate its role in the Middle East a question thats returned to the forefront of peoples minds in the wake of the Paris terrorist attacks. Add on the fact that were entering an election year already marked by absurd overstatements from both parties, and it seems that the Dixie Chicks could be headed for a second round of political criticism. I can only assume Donald Trump and Hillary Clinton will both have something to say about them soon.

Its not clear whether the trio will release new music ahead of their tour, and for now, the Dixie Chicks arent making a peep about their plans. (Two of them did sign a new publishing deal last December, though.) If they do decide to release new material, it will be very interesting to see whether they will attempt to return to country music, and, if so, whether country radio will be willing to play them. We can only hope that both things happen. It would be a huge deal, not just for country musics reputation as a community thats able to accept political differences even though (shocker!) Nashville is, privately at least, a pretty liberal town but also for the state of thriving female talent in the genre.

The Dixie Chicks swift removal from country radio in 2003 is one of the key reasons that country music has developed such a woman problem over the past 15 years. At the time of the Dixie Chicks album Fly in 1999, female-led songs made up 38% of the annual top 100 country songs. But since their ousting from the airwaves, that number has dwindled at an alarming rate. Last year, the percentage of songs led by a female vocalist on that list had sunk to just 18% and one programmer ruffled feathers earlier this year when he suggested that radio stations could garner higher ratings if theyd further reduce womens airplay.

All of this has not gone unnoticed. In the past few years, radio conglomerates and programmers have continually claimed that theyre committed to developing and supporting female talent never missing a chance to pat themselves on the back for doing so. Most of this talk has been hot air, and critical darlings like Kacey Musgraves and Ashley Monroe still arent getting played on radio despite good album sales. But lately, a few women do seem to be making an impact, providing a glimmer of hope for aspiring female artists wanting to make it big in the mainstream. In the past year alone, Kelsea Ballerini, Maddie & Tae, Jana Kramer, and Cam have all had breakthrough moments with viable radio hits, and although Kramer and Ballerini tread in much poppier territory than the Dixie Chicks ever did, Cam and Maddie & Tae actually hark back to the fiddle-driven sound and lyrical sass that made the Chicks famous. From a sheer numbers standpoint, the fact that these talented women are actually getting played at all is a small but significant step in the right direction.

This bit of progress is encouraging, no doubt, but what would be even more encouraging and more galvanizing for country musics quest to showcase great female talent would be a full re-embracing of the Dixie Chicks. Whether that means allowing them to perform at the Academy of Country Music awards, reincorporating their old catalogue back on to country radio, or (fingers crossed) even playing their new material on the same stations, the powers that be in country music (including its listeners) need to admit that they overreacted, and welcome back one of the genres biggest acts with open arms.

The Dixie Chicks play their own instruments, write their own songs, and, before they were backed into a corner and forced to endlessly defend themselves for a single political comment made 12 years ago, they were viewed as beloved storytellers who stirred up feelings of wide-eyed romance, humorous revenge, and big-dreaming adventure. If country music doesnt want those traits and doesnt want pitch-perfect songs like Wide Open Spaces and Cowboy Take Me Away on its stations and if it really cant handle a little political commentary from grown women then thats the genres loss, and sane country fans loss, too.