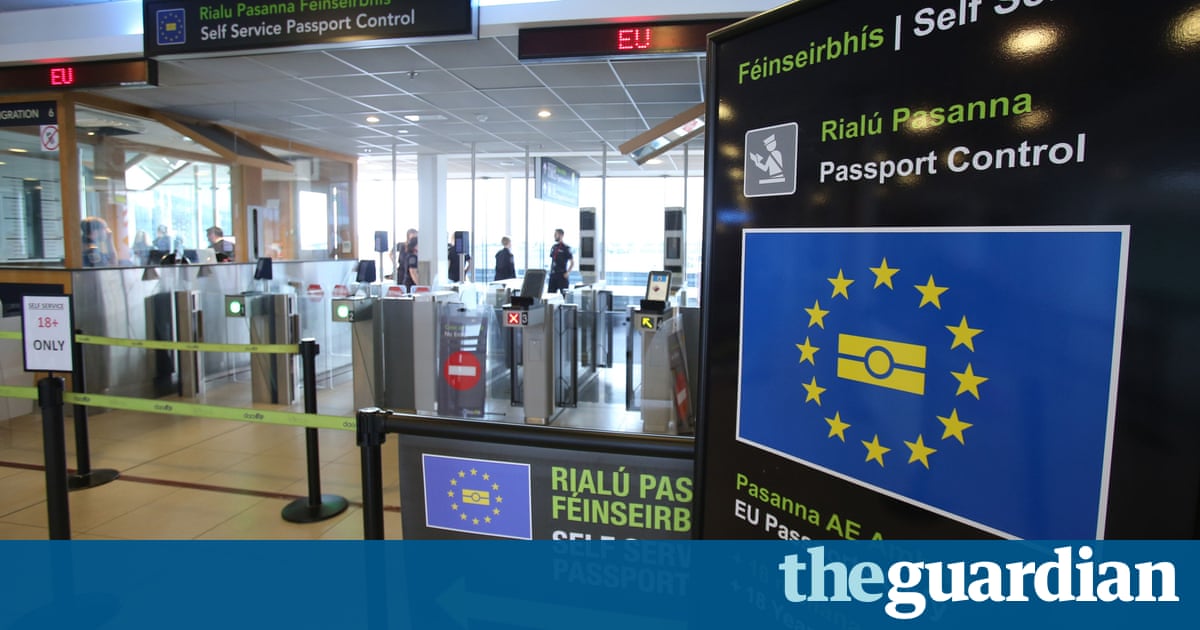 Members of the Irish government have signalled support for UK plans to shift the frontline of immigration controls to Irelands ports and airports post-Brexit in an attempt to avoid a hard border between the north and the south.

The Irish Republics finance minister, Michael Noonan, said neither the Irish nor the UK government wanted a hard border once Northern Ireland has left the EU along with the rest of the UK.

If you do not have a border going from Newry, going across, dividing Sligo and Donegal from the northern counties, the next step is to have controls at the ports. That would mean Rosslare and Larne [sea ports] and the airports, but that wouldnt be much more than the normal checks we have at airports already, where you show your passport, he told the Irish Times.

Frances Fitzgerald, the Irish deputy prime minister and justice minister, said her government was agreeable to the plan, adding there was not anything surprising in the proposals.

Earlier, James Brokenshire, the UKs Northern Ireland secretary, said London and Dublin would work together to strengthen Irelands external borders in order to combat illegal immigration into the UK once it leaves the EU.

While Noonan and Fitzgerald welcomed Brokenshires promise that the common travel area between Britain and Ireland would continue to exist, the Irish coalition government has stressed that any new intelligence-gathering and data-sharing system on people entering Ireland who may also travel into Northern Ireland must win support from all of the Republics EU partners.

Any system designed to enable the UK to control immigration via Ireland is bound to be controversial, and one Irish politician has called the proposal ridiculous.

Matt Carty, the Sinn Fin MEP for the Midlands North-West constituency of Ireland, said British immigration problems should be the least of Irelands worries, given economic and social turmoil caused directly by the referendum result.

He said: The Irish government and a succession of its representatives have been deferential to the British government from time to time. What we are saying is that this is not an occasion for this. We need to be pointing out the needs of this island and making demands for the Irish people. It is not their job to be pushing for the wishes of the British government.

Brexit has presented a huge amount of challenges for the Irish government in terms of the trading relationship with Britain, both to the UK and between Northern Ireland and Ireland. To add on the task of immigration controls, I think is ridiculous.

His colleague Mairead McGuinness, a Fine Gael MEP for the same constituency, said she did not support the notion of Ireland taking on Britains immigration controls.

But she said no such discussions had taken place and that Brokenshires remarks centred on increased cooperation between the UK and Ireland with regard to combatting illegal immigration, such as sharing immigration data for non-EU nationals entering the common travel area. She said this built on existing efforts that were unrelated to the outcome of the UKs EU referendum.

The former taoiseach John Bruton recently warned of the incalculable consequences that Brexit would have on trade.

The underlying assumption of the Good Friday agreement was that both parts of Ireland would be included in a zone of free movement of goods and people, an assumption that is in the process of being unilaterally reversed by the UK sides decision to leave that zone. Brexit will thus devastate trade flows, and human contact, within Ireland, with incalculable consequences, he said in an article in the Financial Times.

Britain is Irelands largest export partner, with 1.3bn (1.2bn) a week traded between the two countries. The collapse of sterling since the referendum has devastated small businesses, who have seen the cost of exporting rise by as much as 17%.

It has also seen a return to booming cross-border trade, with Irish shoppers travelling to the north for cheaper goods including petrol, clothing and footwear, and groceries.