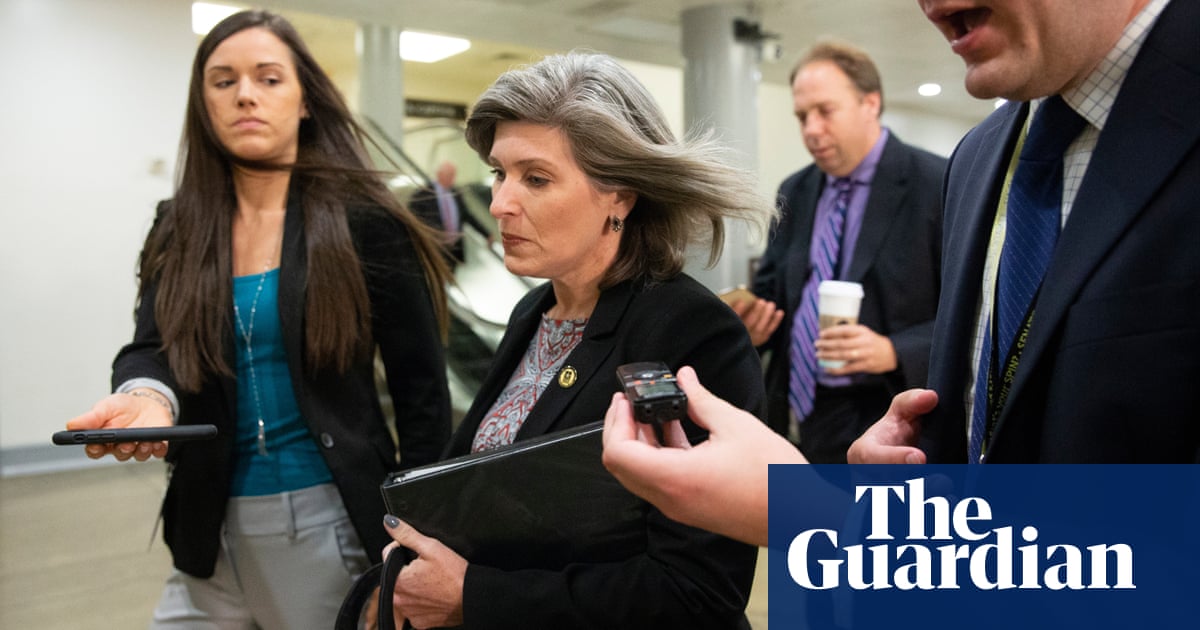 A man took the mic at his local town hall and shared his concern with the Iowa Republican senator Joni Ernst: that Donald Trump had lied about a phone call with the Ukrainian president and pressured the country to investigate one of his political rivals, former vice-president Joe Biden.

He wanted to know what Ernst would do about it.

Addressing 60 or so constituents gathered in the middle school auditorium in Muscatine, Ernst responded by sharing her low opinion of the impeachment inquiry on Trump, launched by the Democrat-controlled House.

Ernst disputed her constituent’s claim that Trump had lied, arguing the White House memo on the Ukraine call showed no evidence of a quid pro quo and criticizing House Democrats for holding “secret meetings” with key witnesses in the investigation. (The memo shows Trump asking the Ukrainian president for “a favor”.)

Ernst may have considered the matter settled after answering that question, but then another constituent asked her about Trump’s impeachment. And then another.

Over the 60-minute town hall, Ernst took three questions related to the impeachment inquiry, suggesting Iowa voters are paying attention to the controversial investigation that is dominating the headlines and throwing the 2020 election into a tailspin. As Ernst looks ahead to her own 2020 re-election race, her allies and opponents alike are trying to figure out whether impeachment will help or hurt Ernst’s efforts to secure a second term. The answer to that question is currently the great unknown of American politics and control of the Senate could be at stake if impeachment puts Republicans like Ernst at risk.

In an interview with the Guardian after her Muscatine town hall, Ernst dismissed the impeachment inquiry as a “political exercise” and insisted Democratic opposition to Trump had “jaded” the investigation.

“They didn’t care what it was,” Ernst said of the Democrats launching the inquiry. “They were just trying to find anything that would give them traction to impeach Trump.”

The Republican senator also argued impeachment was not top of Iowa voters’ minds and said that many of her constituents have called for an end to the investigation. “What I do hear from a lot of folks is: stop this,” Ernst said. “There’s so many things that we have to get done and yet all of the effort is going towards impeachment.”

There is evidence to suggest Iowa voters are prioritizing other issues. According to a poll released last month, only 6% of Iowa voters consider impeachment to be the most important issue when deciding which presidential candidate to back.

But Ernst has repeatedly faced questions about the inquiry in recent weeks, from both the national media and her own constituents.

In a widely reported exchange from a town hall last month, one woman criticized Ernst for “not standing up” to Trump. “Where is the line?” Amy Haskins, asked Ernst. “When are you guys going to say enough and stand up and say, ‘You know what? I’m not backing any of this.’” Days later, Ernst repeatedly refused to answer a CNN reporter’s question about whether it would be acceptable for a president to ask a foreign power to investigate a political rival.

Ernst’s Democratic rivals in the Senate race, including the primary’s frontrunner Theresa Greenfield, have accused the Republican lawmaker of prioritizing party over country.

“It’s wrong, plain and simple, for any president to pressure a foreign government to investigate a political opponent and interfere in our elections,” Jordanna Zeigler, Greenfield’s campaign manager, said in a statement. “Iowa voters expect Congress to get to the bottom of this in an objective and non-partisan way, which is why it’s so disappointing to see Senator Ernst playing politics and already dismissing information that could threaten the integrity of our elections.”

But some of Ernst’s allies suggest the impeachment inquiry may actually help the Republican senator win re-election. Trump won Iowa in 2016 by 10 points, the largest margin of any Republican presidential candidate since Ronald Reagan carried the state in 1980. The president’s approval rating in Iowa has slipped since his election, but Republicans contend Trump maintains a strong base of support in the Hawkeye State.