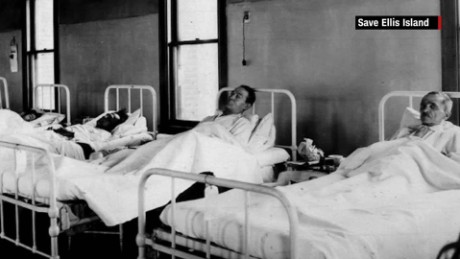 Ellis Island (CNN)Ellis Island is a major tourist destination, attracting more than 4 million visitors a year. Still, much of the island remains off limits to all but a select few.

The island’s basic history is known to every American student: Ellis Island opened in 1892 and closed its doors in 1954. More than 12 million immigrants arriving in New York were taken to Ellis Island to clear immigration checks. Most were processed and allowed into the country. Those who were thought to be sick or disabled, around 1 million in total, were sent to the massive hospital complex on the island’s south side.

Ellis Island became part of the National Park Services In 1965. In 1986, renovations began on the island’s main immigration building. The Ellis Island Immigration Museum opened in that building in 1990.

The hospital complex on the south side still stands, but it’s in what John McInnes describes as “a state of arrested decay.”

“That’s why we wear hard hats,” explains McInnes, public programs manager at the nonprofit Save Ellis Island Foundation, which offers limited tours of the historic site. The group is dedicated to the rehabilitation and preservation of the buildings on the island.

McInnes stands in a “Y” corridor that leads to the hospital complex. “This is actually a really important demarcation point for any immigrant who finds themselves here,” he says in tour guide mode. “If I go down this hallway I’ll be going to the Island Hospital, built to restore the health of people suffering minor injuries, broken bones … even babies were born in that building — 350 babies.”

The other hall took patients to the Contagious and Infectious Disease Hospital, where they were treated for deadly diseases like diphtheria, scarlet fever, measles and whooping cough. Surprisingly, the most frightening diseases were not necessarily the most likely to stop an immigrant from entering the country. If an immigrant survived diphtheria, he or she would return to the immigration process. It was the people suffering from less serious conditions — maybe a bum knee or bad back — who would be sent home, because they couldn’t work.

“If you are not fit enough to enter the United States, they are going to stabilize your condition for deportation,” McInnes says. “The steamship company was responsible for transit and your return trip. Just know that all of the immigrants returning back to Europe would likely be returning with the freight.”

Ellis Island’s hospital complex was built with several pavilions extending off a central hall, leaving plenty of space between each one to keep patients from spreading infections. The design, aptly called “Pavilion Style,” was developed, in part, by Florence Nightingale. Ellis Island’s hospital complex was one of the last pavilion-style hospitals built.

“No two pavilions will face each other because we are concerned about cross contamination,” McInnes explains. “Each pavilion is going to be dedicated to a specific disease.”

The patient rooms were at the back of each pavilion, as far from the hall as possible, with 14 beds placed around the perimeter of the room, near the windows.

Initially the Contagious and Infectious Disease Hospital was separated from the main Island Hospital by a strip of water. Back then, it was wrongly believed that germs couldn’t travel across water, McInnes notes. The water was eventually filled in with soil from the city of New York, creating a grassy area where patients could stroll.

“It was working with the germ theory of the day,” McInnes says. “Fresh air and sunlight were an important part of the curative process. There were a lot of times that was all we had to offer.”

The complex also has isolation wards, which are at the end of the island closest to the Statue of Liberty. Patients in the isolation wards were kept 12 to a room, and could be sealed in for weeks, along with nursing staff, if serious outbreaks occurred.

“It would be a frightening place to work if cholera were to break out.”

Most doctors and nurses who worked in the hospital at Ellis Island lived there as well.

Nurses lived in dormitories above the rooms where patients were treated; the pharmacist mixed and dispensed medications from his house. The top two medical officers on the island, the chief of surgery and the chief of psychiatric, lived with their families in apartments connected to the end of the hospital complex.

A kitchen in the hospital complex cooked 1,500 meals a day, plus provided cold milk and biscuits for the women and children twice daily.

“It is where people got their first enculturation of America,” McInnes says. He likes to tell the story of the immigrant who said, “My first meal was worms covered with blood.”

“What was he eating? Spaghetti.”

The laundry room cleaned 3,000 pieces of hospital linens a day in giant commercial washing machines with names like “The Fletcher Whirlwind,” which look more like components from Jules Verne’s submarines than a modern-day Maytag.

Men did the washing and drying at Ellis Island, McInnes says. The women did the ironing and folding.

Keeping the mattresses clean was another challenge. A machine called the “mattress autoclave” steam boiled contaminated mattresses to kill bacteria.

Safety procedures appear to have at least partially worked to protect staff. Though approximately 3,500 people died on Ellis Island, that included no staff members who contracted diseases from their patients, McInnes says.

Tremendous work has gone into stabilizing the hospital buildings and stopping their deterioration, but more work needs to be done. In one hallway, the doors and windows are gone; they’re covered with poison ivy vines. Trees poke through, allowing the rain in. The water is only expediting the decaying process. In the hall, chimney bricks that fell down during Superstorm Sandy lie stacked on wooden pallets in hopes of being put to use in a future restoration.

“It takes a lot of money to do anything, from mowing the grass to even returning artifacts to the south side of the island,” McInnes says.

He estimates a complete restoration of the south side of the island would cost about half a billion dollars, a price tag that grows every year.