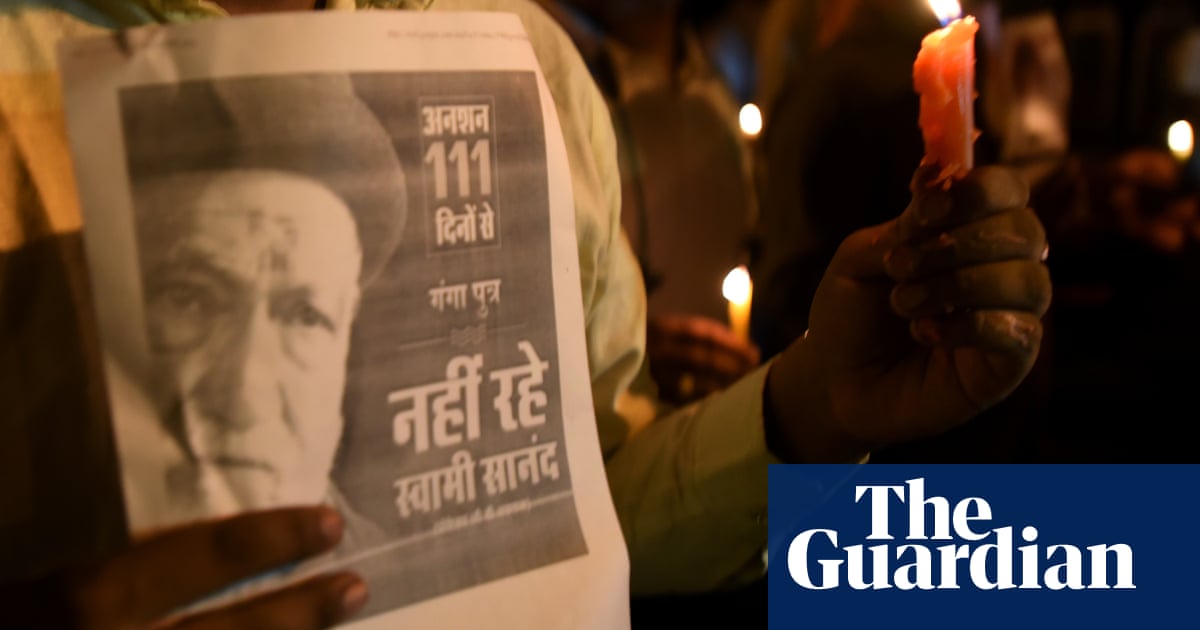 An Indian environmental activist has died on the 111th day of a hunger strike to pressure the government to clean the Ganges river.

GD Agarwal, a former professor of environmental engineering at one of India’s top universities, died on Thursday afternoon in hospital in the north Indian city of Rishikesh, where he had been admitted earlier that day.

A spokesman for the All India Institute of Medical Sciences in Rishikesh said Agarwal, 87, had died from a cardiac arrest. Doctors at the institute told local media he had a hernia, high blood pressure and a coronary artery disease, all of which were exacerbated by the fast.

Agarwal, who also went by the monastic name Swami Gyan Swaroop Sanand, had been fasting since 22 June to protest against the government’s inaction in cleaning the Ganges river.

The 2,525km Ganges, also known as Ganga or Gangaji, is worshipped by most Hindus as a goddess but for vast stretches is heavily polluted by the discharge of untreated sewage and industrial waste.

The Indian prime minister, Narendra Modi, has made cleaning the Ganges one of his government’s flagship promises, but environmental scientists and activists say the state of the river has continued to degrade on his watch.

Agarwal had written an open letter to Modi demanding hydropower and sand mining projects be stopped at various points along the river. “In the past four years all actions undertaken by your government have not at all been gainful to Gangaji and in her place gains are to be seen only for the corporate sector and several business houses,” he wrote.

“Till now you have only thought on the point of earning profits from Gangaji. You do not seem to be giving anything to Gangaji.”

Agarwal had subsisted on water mixed with lemon and honey and had been taken to hospital at least twice. On Wednesday his supporters say he gave up liquids out of frustration at the lack of progress in his negotiations with the government.

“He didn’t expect to live more than two or three days,” said Ravi Chopra, a protege of Agarwal’s for more than three decades.

“He was in good health until the 110th day, when he stopped drinking water. He felt he would have to sacrifice his life to focus the country’s attention on the issue.”

Agarwal had undertaken several fasts before against development in the river and in 2009 managed to stop the damming of the Bhagirathi river, a source stream for the Ganges, after fasting for 38 days.

India’s minister for the restoration of the Ganges, Nitin Gadkari, said he had written to Agarwal on Wednesday asking him to give up his fast, telling him the government met almost all his demands by mandating minimum flows at different sections and was preparing new, tougher environmental regulations.

But Chopra said Agarwal was angered by the minimum flow standards, which he believed were arbitrarily set and applied to too limited a stretch of the waterway.

“The government is not only not making any progress – the state of the Ganga is actually worsening,” said Himanshu Thakkar, coordinator of the South Asia Network on Dams, Rivers and People, an environmental lobby group.

He said the river was still being dredged and new infrastructure was being built as part of a plan to increase boat and ferry traffic on its waters. “The impact this will have on Ganga they are not even assessing,” he said.

New sewage and effluent treatment plants are being built on the river but Thakkar said governance was still too weak to ensure they functioned properly.

“[Building treatment plants] is what we’ve been doing for the last 34 years and has not improved the state of the river,” he said.

“In India there is no accountability – there are no consequences if the treatment plants don’t function.”

Modi offered his condolences for Agarwal’s death on Twitter. “His passion towards learning, education, saving the environment, particularly Ganga cleaning will always be remembered,” he said.

Hunger strikes, a form of nonviolent activism pioneered by Mahatma Gandhi, remain a common feature of Indian public life, though relatively few people fast to death. The tactic was most prominently used in recent years in 2011, when the activist Anna Hazare’s fast helped to spark a nationwide anti-corruption movement that led to the creation of a new political party, the Aam Aadmi party, which now rules in Delhi. Politicians frequently engage in largely symbolic one- or two-day fasts to raise awareness of their issues.

Agarwal was a former professor at the Indian Institute of Technology in Kanpur and secretary of the Central Pollution Control Board, a top environmental regulatory body. In 2012 he joined a Hindu holy order, changed his name and renounced his earthly possessions.

Agarwal’s body was donated to Banaras Hindu University in the holy city of Varanasi. “He was always an activist at heart, going back to when he was at Berkeley [in California, US] and he noticed the free speech movement there,” Chopra said.