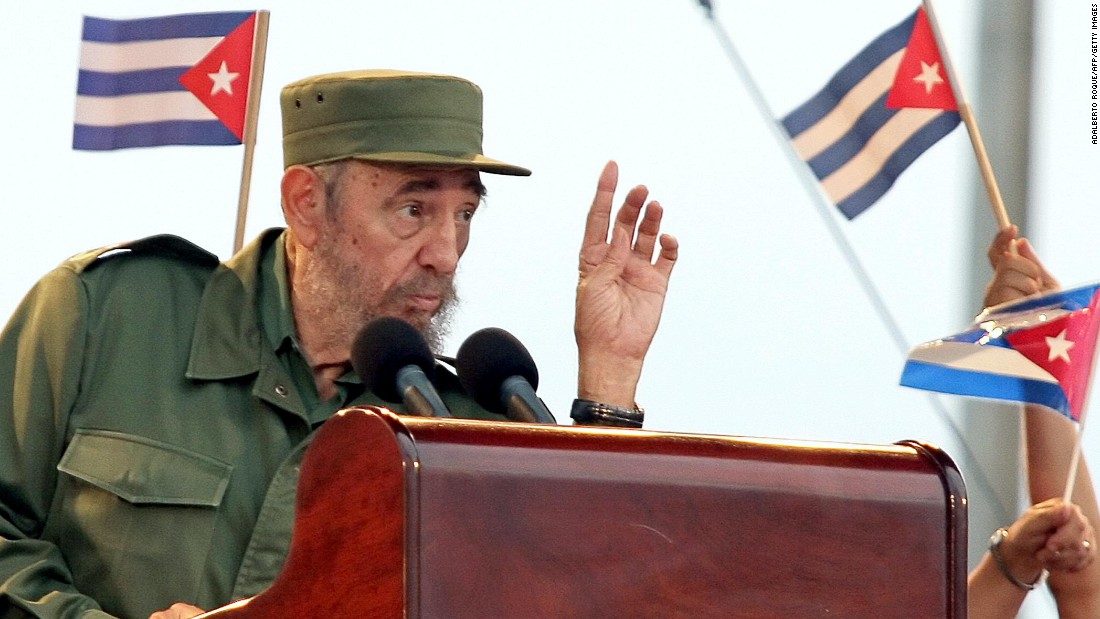 Havana, Cuba (CNN)The Cuban people will stop to pay their respects this week to the late Fidel Castro, the country’s former leader who dominated the island nation for decades.

The national nine-day mourning period began Saturday, as the nation woke up to the news that the man who had long been the face of their nation was gone.
“The Cuban people are feeling sad because of the loss of our commander in chief Fidel Castro Ruz, and we wish him, wherever he is, that he is blessed, and us Cubans love him,” a young Cuban woman told CNN, 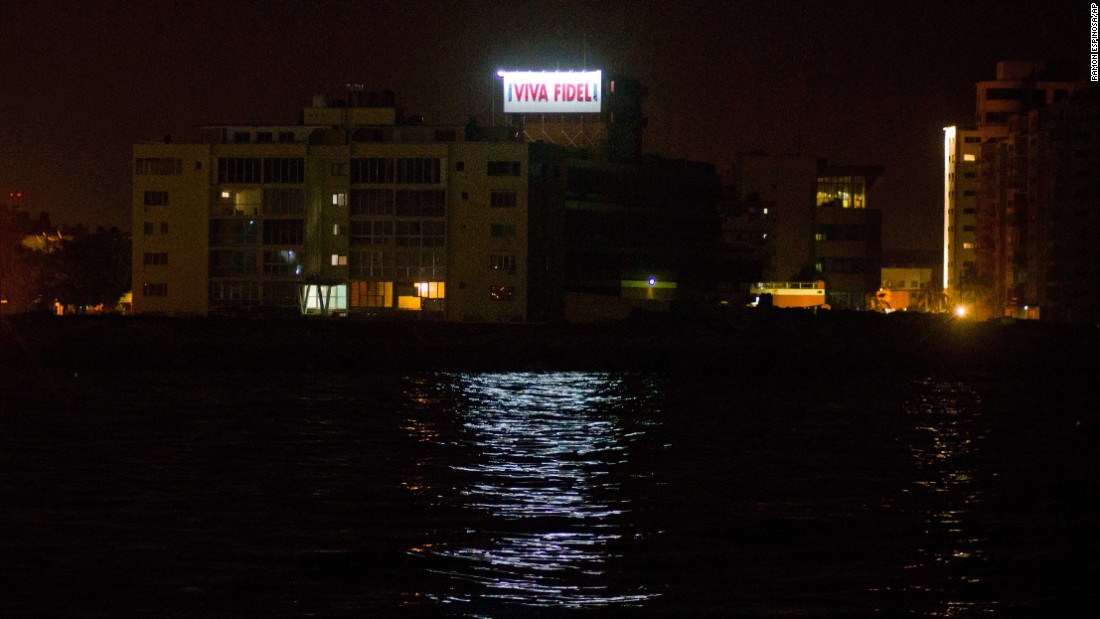 Castro died Friday at 90. His brother, Raul Castro, announced his death in a televised statement.
“I say to the people of Cuba, with profound pain I come here to inform our people, our friends of America and the world, that today, 25 November, 2016, at 10:29 pm, died the chief commander of the Cuban revolution, Fidel Castro Ruz,” Raul Castro said.
All activities and public performances will stop, and the flag will be flown at half-staff in public and military establishments. Radio and television will broadcast patriotic and historical programming, state news outlet Granma reported.

A concert by famed tenor Placido Domingo was canceled and clubs that were usually alive with music were silent.
Granma reported the following time frame of events during the days of mourning:
Cubans will be able to pay their respects throughout the country at different memorials on Monday and Tuesday. A public mass will be held in the Jose Marti Revolution Square in Havana on Tuesday evening.
Fidel Castro’s body was cremated and on Wednesday, his ashes will be taken along the reverse route he took across the island after seizing power in 1959.
The trek with Castro’s ashes finishes on Saturday and culminates with another mass in Plaza Antonio Maceo in Santiago de Cuba. Castro’s funeral will be held Sunday morning at Santa Ifigenia cemetery in Santiago de Cuba.
At the University of Havana, where Castro attended law school 70 years ago, people placed flowers and photos by a statue on the main steps of the college.
Cuban government-run website Cubadebate tweeted photos from the site: “Because your people love you, they cry for you. Goodbye Comandante! #alwaystowardvictory #cuba #fidelcastro #untilforevercommandante
Facebook photos from Cubadebate showed scores of young people at a gathering at the statue. Many held posters and some cried.
In Bran, a town near Cuba’s eastern tip where Castro was born, people were calling and knocking on the door of his half-brother, Martin Castro.
They wanted to know whether the hometown revolutionary was dead.
“They have been knocking and calling and asking if it is true,” said Angel Daniel Castro, a nephew of Fidel Castro’s. “Many people are crying. Some complain of high blood pressure. Fidel was a good man.
“For us, he was like a father. And Cuba sees him as a father. One woman just called crying and saying she had lost her father. Everyone feels it.”

The streets of Havana were as somber Saturday as the streets of Little Havana in Miami were festive
Across the Straits of Florida in Miami. In the Little Havana neighborhood of Miami, home to Cuban exiles, revelers partied all day, waving Cuban or US flags while some sang to festive music.
Revelers spilled into the streets of Miami. They popped champagne, clanged pots, cheered and waved the Cuban flag in jubilation. They stood outside the popular Versailles restaurant in Little Havana with signs reading, “Satan, Fidel is now yours.”
“This is a celebration, but not a celebration of death, but a beginning of liberty that we’ve been waiting for many years. The hope is … that it opens up Cuba a little bit more,” a Cuban-American man said.
“It means a lot for us Cubans,” another reveler told CNN affiliate WSVN. “It’s a moment that we’ve been waiting for 55 years. We’re free at last. The man that caused so much suffering, so much people to be sad in my country … has passed away.”
Castro reigned in Havana for nearly five decades with an iron hand, defying a US economic embargo intended to dislodge him.
But he lived long enough to see a historic thaw between Cuba and the United States. The two nations reestablished diplomatic relations in July, and President Barack Obama visited the island this year.
Obama extended “a hand of friendship to the Cuban people” as he offered his condolences to Castro’s family in a statement.
“We know that this moment fills Cubans — in Cuba and in the United States — with powerful emotions, recalling the countless ways in which Fidel Castro altered the course of individual lives, families, and of the Cuban nation,” he said.
“History will record and judge the enormous impact of this singular figure on the people and world around him.”
Fidel Castro dies: What now for US-Cuba relations?

Historic figure of the 20th century

To some, Castro became a romantic figure and a legendary survivor despite what Cuban officials say were more than 600 attempts to kill him. During a rare public appearance in April, Castro marveled that he had lived to his ninth decade.
“Soon I will turn 90 years old, never would such a thing have occurred to me, and it’s not the outcome of any effort; it was fate’s whim,” Castro said, discussing his health, usually a taboo subject on the island. “Soon I will be like everyone else. To all of us comes our turn.”
Castro had many admirers, who saw him as a stalwart with his ubiquitous military fatigues and fiery oratory. He clung to a socialist economic model and one-party Communist rule, even after the Soviet Union disintegrated and most of the rest of the world concluded that state socialism was an idea whose time had come and gone.
The Cuban Communist Party mourned for “the commander of the Cuban Revolution” with the hashtag #UntilVictoryAlwaysFidel.
Chinese President Xi Jinping hailed Castro as a “great leader” for the Cuban people and said China had lost “an intimate and sincere friend,” according to a statement read out on Chinese state TV.
“He achieved immortal historical achievements for the development of world socialism. He was the great person of our era, and people and history will remember him,” Xi said. “Great Castro will live forever. “
Mexican President Enrique Pea Nieto called Castro a friend of Mexico, who had promoted bilateral relationships based on “respect, dialogue and solidarity.”
In an official Kremlin statement sending condolences to the Cuban people, Russian President Vladimir Putin remembered him as a “symbol of an era in recent world history” and “a sincere and reliable friend of Russia.”
Putin saluted Castro for building a “free and independent Cuba” and described him as “an influential member of the international community.”
Former Soviet President Mikhail Gorbachev said he and Castro had become “very good friends,” in comments reported by Russian state news agency Tass, and that the Cuban “was an outstanding personality, unique.”
North Korean leader Kim Jong Un expressed his condolences to the Castro family and the Cuban people in a statement released through state news agency KCNA.
Kim said that Castro was the “outstanding leader of the Cuban people and a prominent political activist who made distinguished contributions to accomplishing the cause of independence against imperialism,” the English-language version of KCNA reported.
Pakistani politician Imran Khan hailed Castro as “an iconic revolutionary leader” who stood against the United States.
Indian Prime Minister Narendra Modi said he was “one of the most iconic personalities of the 20th century. India mourns the loss of a great friend.”
Canadian Prime Minister Justin Trudeau described Castro as “a larger than life leader who served his people for almost half a century. A legendary revolutionary and orator, Mr. Castro made significant improvements to the education and health care of his island nation.”

‘End of an era for Cuba’

Other leaders noted Castro’s global impact but did not praise a man whose record on human rights was questionable.
French President Franois Hollande said Castro “embodied the Cuban revolution, with the hopes it aroused and then in the disillusion it provoked. Actor of the Cold War, he corresponded to an era which ended with the collapse of the Soviet Union.” Hollande also said he welcomed the recent thaw in US-Cuba relations.
UN Secretary-General Ban Ki-moon said he had had a “lively discussion” with Castro during a visit to Cuba in 2014. “Under former President Castro, Cuba made advances in the fields of education, literacy and health. I hope Cuba will continue to advance on a path of reform and greater prosperity,” Ban said.
Pope Francis sent a telegram to Raul Castro expressing his sorrow for Castro’s family and the Cuban people, and offering his prayers.

Many viewed Castro as an enemy of human rights, who suppressed and imprisoned dissidents.
“I am shedding tears tonight, but they’re tears of joy,” said Armando Salguero, a Miami Herald columnist. “Hell has a special place for Fidel Castro and there’s one less vacancy in hell tonight.”
He said many Cubans were cheering, because they had been forced to come to the United States when they couldn’t have the freedom to make a life in their homeland.
Repressive laws allow the government to jail and punish its critics, such as dissidents and journalists with long prison sentences, according to Human Rights Watch. The government also uses beatings and public acts of shaming, the organization reported.
US Rep. Ileana Ros-Lehtinen,who fled Cuba with her family when she was 8 and went on to become the first Cuban-American elected to Congress, cautioned that “the death of one dictator will not usher a new wave of change because the rulers of Cuba, whether it’s Fidel, Raul, whatever names you give them, they just rule over Cuba with an iron fist.”
Speaking to CNN, she lashed out at the Canadian Prime Minister’s statement describing Castro as a “legendary revolutionary.“
“I’ve been reading his sickening love letter to dead Fidel Castro and I’m thinking, ‘Sure, you did not lose a loved one to an execution squad. You did not lose a loved one to the gulags in Cuba,’ ” she said, while urging any foreign leaders praising Castro to look at the “real record” of his decades in charge.
“The only thing that Fidel has been successful in, has not been health nor education, or human rights or democracy, it’s been holding onto power — which is easy to do when you don’t have elections,” she said.