In talks with Tsipras about struggling economy, Lagarde sets out fresh conditions for further financial aid 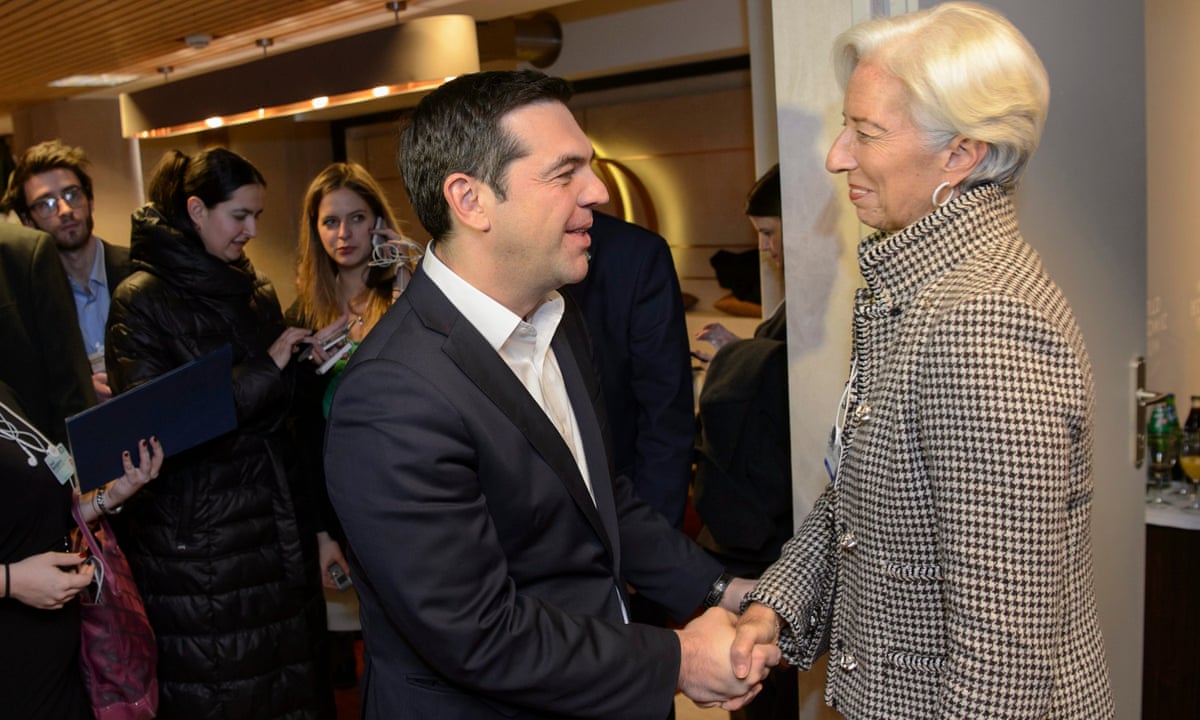 The European Union will need to provide significant debt relief for Greece if it is to persuade the International Monetary Fund to put its financial clout behind the countrys third bailout package, the Washington-based organisation has said.

After what was described as a cordial meeting between the IMFs managing director, Christine Lagarde, and the Greek prime minister, Alexis Tsipras, on the sidelines of the World Economic Forum in Davos, the fund said it was only prepared to support the recession-ravaged eurozone country on a strings-attached basis.

It said Greece had to be prepared to implement a tough package of economic reform and the countrys eurozone partners had to be willing to write down Greeces debts.

The IMF took part in the first two Greek bailouts but is concerned that, at 175% of GDP, Greeces debts are too burdensome and will prevent a lasting recovery. Lagarde told Tsipras the IMF regarded reform of Greeces pension system, which accounts for 10% of GDP, as vital.

The IMF said of the talks: The managing director reiterated that the IMF stands ready to continue to support Greece in achieving robust economic growth and sustainable public finances through a credible and comprehensive medium-term economic programme.

Such a programme would require strong economic policies, not least pension reforms as well as significant debt relief from Greeces European partners to ensure that debt is on a sustainable downward trajectory.

The Greek government said the talks had been sincere.

Earlier in the day, Tsipras told Davos he was committed to reforming the Greek economy, which lost 25% of its GDP through austerity programmes which sent jobless rates to twice the eurozone average. But he criticised Europes insistence on lowering budget deficits, saying: We must all understand that, next to balanced budgets, we must also have growth We need to be more realistic, and show more solidarity too.

The German finance minister, Wolfgang Schäuble, appeared unimpressed by Tsiprass call for greater solidarity, and suggested he needed to deliver on the promises made to creditors. My advice is, if we want to make Europe stronger we should implement what we agreed to implement. We can simply say, implementation, stupid, Schäuble said, in a dig at the Greek leader echoing the catchphrase from Bill Clintons 1992 US election campaign.

The scale of the challenge facing Tsipras was clear in Athens on Thursday. As he rubbed shoulders with fellow world leaders in the Swiss ski resort, thousands of protesters marched through the Greek capital to oppose pension reforms. Many were professionals, such as doctors and engineers, adding their voices to existing protests by farmers and fishermen.

Lagarde had earlier called on China to take action to halt the turbulence in financial markets by providing clearer communication about its strategy of reform. Sidestepping questions about whether she wanted a second term at the IMF, she said: Given the massive transitions in China, there is a communication issue this is something that markets do not like.

Chinese delegates repeatedly insisted they were not losing control of the economy, growth of which has slowed to 6.8% in the last quarter, its slowest pace in 25 years. Fang Xinghai, vice-chairman of Chinas securities regulatory commission, was sitting alongside Lagarde when he said: I am here to communicate.

He played down the volatility in the Chinese stock market, saying that while it was down 40% from its peak, it was up 30% over 18 months. He reiterated that there was no basis for China to devalue the yuan. But, Fang added: In China, we cannot afford to let the growth rate drop too sharply, because that will ignite a lot of financial problems.

Li Yuanchao, vice-president of China, told another session in Davos: Despite the volatility in the world economy, China still achieved a GDP increase of over $500bn (£352bn) [in 2015], which is estimated to be the largest in the world.

Chinas GDP grew only 6.9%, but Li said the medium-high growth rate was to be expected given the countrys drive to diversify its economic growth drivers.