Our tax code is deliberately designed to reward money over work, and the corporate tax cut financially rewards companies for moving money and jobs overseas 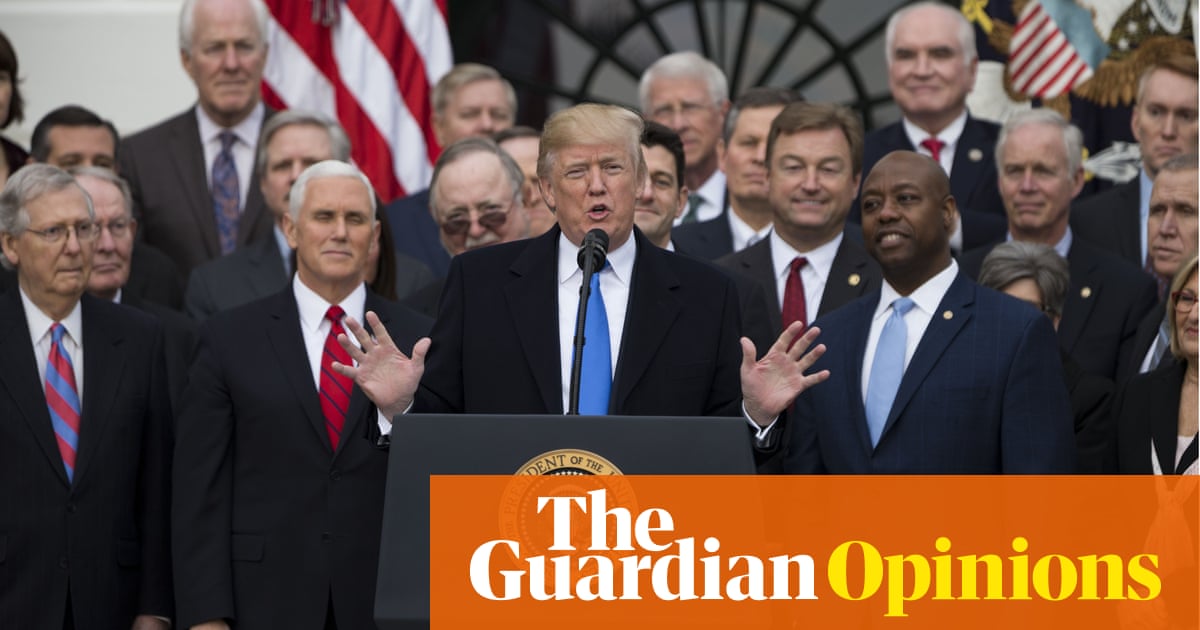 In 2013, just a few years after the 2008 financial crisis, I was part of BlackRock’s Financial Markets Advisory Group working for the Greek Central Bank, assessing the capital requirements of the bailouts of the Greek banks. I was on the top floor of a bank building in Athens with about 20 bank executives taking a lunch break, when I glanced out the window and saw a huge crowd of people on the street.

For a moment I thought it was a parade, and then I realized it was something between a protest and a riot. As I looked out the window to the heated crowd below, and looked behind me to the well–fed bankers at the table, I wondered if I was actually helping anyone beyond the people having lunch with me.

A few months later, I left a 30-year career on Wall Street to work full time as chair of the board of the Patriotic Millionaires. I haven’t looked back since.

There’s a Greek proverb that goes: “A society grows great when old men plant trees whose shade they know they will never sit in.”

Lately, the old men running our country haven’t been planting trees, they’ve been cutting them down to make room for private golf courses.

Right now, millionaires and billionaires are building luxury bomb shelters and private islands, high end sanctuaries for the end of days. They’re willing to pay millions to live through the collapse of society in comfort, but how many of them have spent that same amount – or anything for that matter – to change the dynamics that are creating that threat in the first place?

And while I’d like to believe my fellow millionaires will see the light soon, we can’t rely on them.

In these divided times, with noise and spin coming from every corner of Washington and the media, it’s hard to know whom to trust. Taxes are even worse than most other issues, because not only does everyone have a point they’re trying to sell to you, they present it in what seems like the most dense, complicated way possible. It’s almost like they want you to be confused.

Their money v your sweat

Our elected officials may speak eloquently about the nobility of labor and the value of a hard day’s work, but money talks louder, and our tax code is deliberately designed to reward money over work.

Most of the ultra–rich make the vast majority of their money through capital gains, not income. They don’t work in the way most Americans work, because they live off of their investments. And it’s a lucrative path, because the top capital gains rate is barely over half of that paid for ordinary income.

That means a billionaire whose investments earn him millions of dollars while he sits around at the beach and goes to fancy cocktail parties pays a lower tax rate on his earnings than almost any working American.

Investing is not inherently more valuable than labor, and it’s simply not true that investing in the stock market creates jobs.

Take it from me: I am an investor. I have not actually worked in years. I let my money make me money. Over the past year, do you know how many jobs I’ve created? Zero. The only thing that does create jobs is consumer demand for products and services that people can make and provide, not my investment dollars.

If we want to create jobs, we should be implementing policies that grow the middle class and help bring people up out of poverty so they can participate in the economy.

Unfortunately, the “Tax Cuts and Jobs Act” will do just the opposite.

The biggest rewrite of the tax code in decades

In the past few years corporate profits have reached record highs, and two–thirds of Americans agree that corporations pay too little in taxes. The Republican-controlled Congress disagreed.

Instead of closing loopholes and putting in place rules to ensure that corporations pay more, they passed a massive corporate tax cut that financially rewards companies for moving money and jobs overseas.

Now, corporations actually pay lower taxes rate (about half) on income earned overseas. Imagine that I have a business selling computer systems, and I have an 800 number that people call to get help using the systems. That support is a key part of the value of these system, and about half of my company’s costs involve running the telephone support center.

With the new tax system, I can:

The new system put in place by the Republican tax bill is what economists call a modified territorial tax system.

In it, not only is the corporate tax rate on overseas profits just half the normal rate (10.5% versus 21%), companies still receive credits for the foreign taxes they pay. So if a corporation earns its profits in a country where the corporate tax rate is above 13.1% (nearly every other country), then it ends up paying nothingin US taxes.

Not only does the tax bill encourage corporations to move their money and their corporate headquarters overseas, it actually incentivizes them to move plants and manufacturing facilities to other countries as well.

That’s right – rather than help bring back American manufacturing, this bill actually gives companies a tax break for moving their factories to other countries.

Tax jargon aside, this means that the more equipment and factories a company has in other countries, the more tax–free income it can earn.

If that isn’t a strong incentive to shut down American factories and move them overseas then I don’t know what is.

So if corporate tax cuts don’t bring back manufacturing, or lead to job or wage growth, who benefits?

The answer is clear: CEOs and stockholders.

This is unsurprising to anyone who’s tracked corporate responses to last year’s bill. While some corporations have given raises or bonuses, the amount given to workers is dwarfed by the hundreds of billions of dollars that have been spent on stock buybacks. It took less than two months in 2018 for companies to announce over $200 billion in share buybacks, more than double the amount from the same period in 2017.

Nonsense. Millionaires put their pants on one leg at a time, just like everyone else. Consumer demand is the only real “job creator”. And nothing is going to collapse if millionaires pay their fair share (except for possibly an over–inflated ego or two).

I’m writing this in the hopes that some of my fellow citizens – those who are millionaires and those who are not, people in both parties and no party at all – will read it and be inspired to think differently about taxes. Then I hope they will act.

Together, we can build the next best century for our nation.

State of the Union: Pelosi expresses her disdain as Trump pitches for re-election