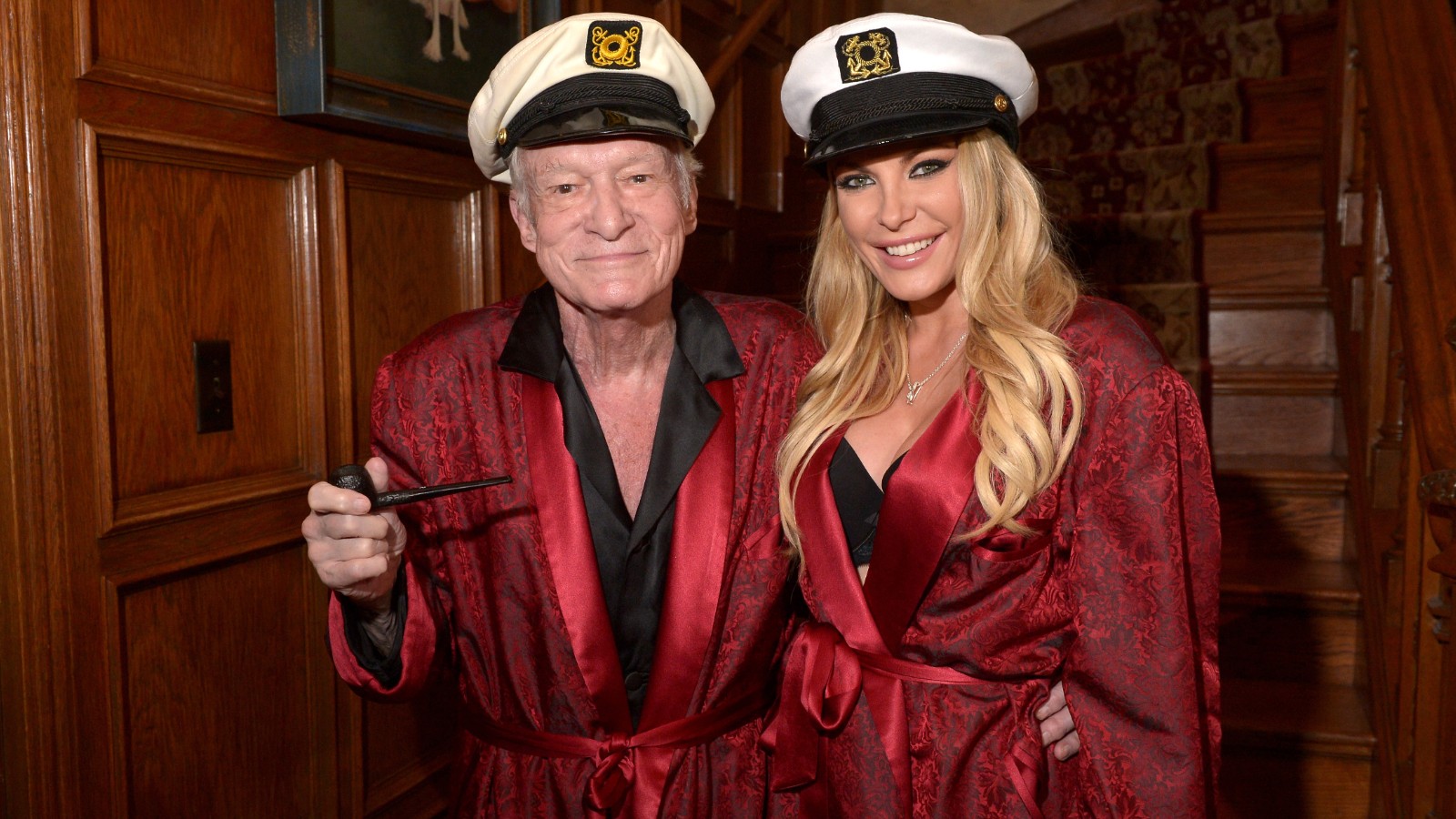 (CNN)Here’s a look at the life of Hugh Hefner, editor-in-chief of Playboy Magazine.

Birth place: Chicago, Illinois
Birth name: Hugh Marston Hefner
Father: Glenn Hefner, an accountant
Mother: Grace (Swanson) Hefner, a teacher
Marriages: Crystal Harris (December 31, 2012-present); Kimberley Conrad (July 1, 1989-September 2009, divorced); Mildred Williams (June 25, 1949-1959, divorced)
Children: with Kimberley Conrad: Cooper Bradford, 1991; Marston Glenn, 1990; with Mildred Williams: David Paul, 1955; Christie Ann, 1952
Education: Attended the Art Institute of Chicago, 1946; University of Illinois, BA, Psychology, 1949; Attended Northwestern University, 1949
Military service: US Army, 1944-1946
Other Facts:
The first issue of Playboy had no date in case there wasn’t a second issue.
The Playboy message appeared in the 1953 premiere issue: “We like our apartment. We enjoy mixing up cocktails and an hors d’oeuvre or two, putting a little mood music on the phonograph and inviting in a female acquaintance for a quiet discussion on Picasso, Nietzsche, jazz, sex…”
Is a big proponent of Viagra.
An avid film buff, he screens new and classic movies at the mansion every week.
Has an endangered rabbit named after him, Sylvilagus palustris hefneri. The Playboy Foundation helped fund the study of this rabbit found only in the Florida Keys.
He holds two Guinness World Records for the longest career as an editor-in-chief for the same magazine, 59 years, and for the largest collection of personal scrapbooks, 2,643.
Timeline:
1951-1952 – Copywriter for Esquire magazine.
1952 – Begins working on idea for Playboy with $600 personal capital and $6,000 – $10,000 from investors.
December 1953 – The first issue of Playboy magazine hits the newsstands, selling for 50 cents. It features a nude calendar photo of Marilyn Monroe and sells more than 50,000 copies.
December 1959 – Buys the first Playboy Mansion in Chicago.
1959-1960 – Host of the television program, “Playboy’s Penthouse.”
February 29, 1960 – The first Playboy Club opens in Chicago.
June 4, 1963 – Is arrested on charges of publishing and circulating obscene literature, for the June issue featuring Jayne Mansfield.
December 7, 1963 – The jury is dismissed after it deadlocks 7-5 for acquittal in Hefner’s obscenity trial.
1965 – Buys the 37-story Palmolive Building. The renamed Playboy Building houses the executive offices for HMH Publishing and Playboy Clubs International until 1989.
1968-1970 – Co-host of television program, “Playboy After Dark.”
1971 – Buys the Playboy Mansion West in Holmby Hills, California.
1971 – Monthly circulation of Playboy peaks at seven million issues, the same year the company goes public.
1972 – The first overseas edition of Playboy magazine is launched in Germany.
1975 – His daughter, Christie, joins the company as special assistant to the chairman.
1980 – Receives a star on the Hollywood Walk of Fame for his efforts championing the reconstruction of the Hollywood sign.
1982 – Christie Hefner is named president of Playboy Enterprises, Inc.
March 1985 – Suffers a mild stroke.
1988 – Hefner steps down as chairman and CEO, and his daughter, Christie, takes control. He remains active in various editorial duties, including choosing the Playmate of the Month. (Christie Hefner serves as CEO until 2009.)
1989 – Playboy Enterprises moves to smaller offices on Chicago’s Lake Shore Drive.
1992 – Purchases the crypt next to Marilyn Monroe’s in the Westwood Village Memorial Park cemetery for $75,000.
1992 – Donates $100,000 to the University of Southern California to fund a course, Censorship in Cinema.
1995 – Donates $1.5 million to the University of Southern California to endow the Hugh M. Hefner Chair for the Study of American Film.
April 1998 – Is inducted into the American Society of Magazine Editors Hall of Fame.
1998 – Wife Kimberley and their two sons move into a house adjacent to the mansion after the couple separate.
August 7, 2005-August 8, 2010 – “The Girls Next Door” airs. The cable reality series stars Hefner and his three girlfriends Holly, Bridget and Kendra.
November 2007 – The University of Southern California’s School of Cinematic Arts receives a $2 million donation from Hefner.
March 5, 2009-April 10, 2009 – Guest curator at the UCLA Film & Television Archive’s Humphrey Bogart retrospective.
December 24, 2010 – Proposes to Crystal Harris, 24, Playboy’s December 2009 Playmate of the Month.
June 14, 2011 – Hefner reports on Twitter “The wedding is off. Crystal has had a change of heart.” The ceremony was scheduled for Saturday, June 18 at the mansion.
October 4, 2011 – NBC cancels “The Playboy Club,” a television drama based on the original Playboy Club set in the early 1960s, after three episodes.
January 2012 – Playboy Enterprises Inc. announces that its headquarters will move from Chicago to Los Angeles by the end of April.
November 2012 – Hefner and his son Cooper speak to the Wall Street Journal about the probability of Cooper taking over as the public face of Playboy in 2014.
December 1, 2012 – Announces his engagement to Crystal Harris is back on.
December 31, 2012 – Marries Crystal Harris.
March 2013 – In an interview for Esquire magazine, Hefner claims the number of women he’s slept with is “over a thousand, I’m sure. There were chunks of my life when I was married, and when I was married I never cheated. But I made up for it when I wasn’t married.”
January 11, 2016 – Playboy Enterprises says it has listed the Playboy Mansion West for $200 million. Sale terms include the stipulation that Hefner must be allowed to live there for the rest of his life.
May 16, 2016 – A lawsuit filed in Los Angeles Superior Court accuses Hefner of conspiring with Bill Cosby in 2008 to commit sexual battery of a minor. The plaintiff, Chloe Goins, claims that Hefner “knew or should have known that Cosby….had a propensity for intoxicating and or drugging young women and taking advantage of them sexually…while they were unconscious.”
May 18, 2016 – Attorneys for Judy Huth take the deposition of Hefner in a civil case against Bill Cosby. Huth accuses Cosby of forcing her to perform oral sex on him after drugging her at the Playboy Mansion in the 1970’s. The testimony of Hefner is under seal.
August 16, 2016 – It is announced that the Playboy Mansion has sold for $100 million. The buyer is Daren Metropoulos, co-owner of Twinkies maker Hostess. He has lived next door to the Playboy mansion since 2009. Hefner will stay at the home for the remainder of his lifetime.
April 7, 2017 – “American Playboy: The Hugh Hefner Story” premieres on Amazon. The docuseries chronicles the life and impact Hefner has had on American culture.