Tanya Gold published a piece about a plus-size mannequin one Sunday. By Monday morning the internet had gone mad and was out for her blood 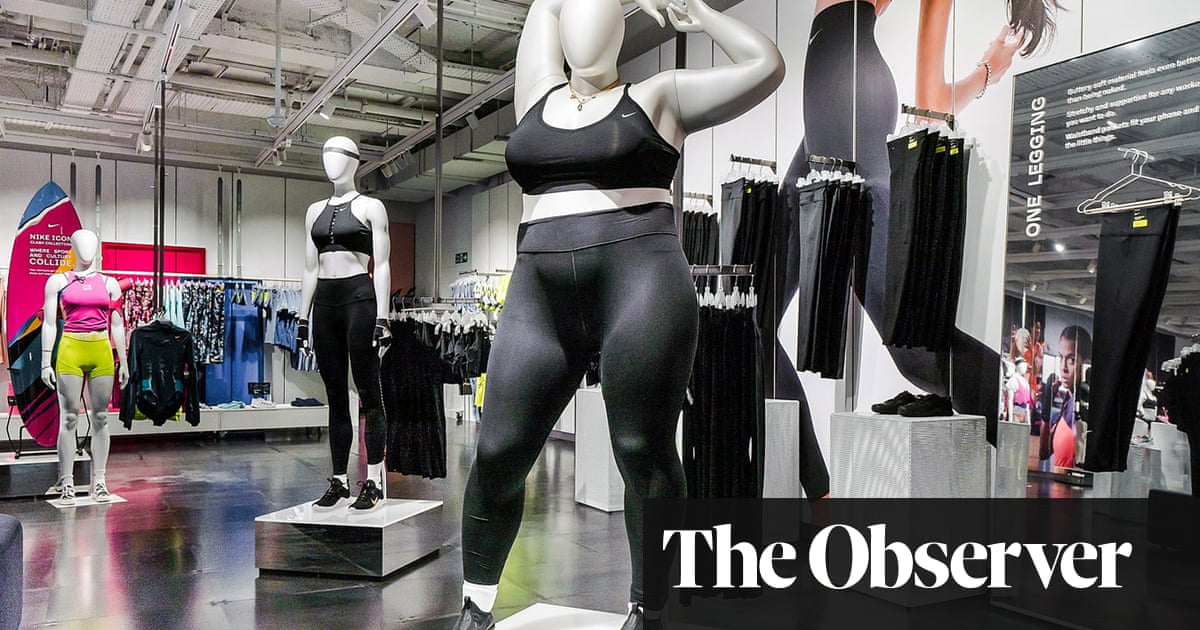 It was my fault. Sometimes I write glibly. I make an argument for myself and forget that people read it. It still surprises me, after 20 years of writing, to think that I have readers: that my internal monologue is out and about in the world. I do not think about them. If I did, I couldn’t write anything.

In June, I wrote a piece about Nike’s obese mannequin, which was displayed at the London flagship shop to publicise Nike’s new willingness to sell clothes to overweight women. It makes me laugh now to think I insulted a mannequin – how, on that day in 2019, we came to discuss human rights for mannequins. I said it was a cynical doll from a cynical company that is no friend to women. I said that the normalisation of obesity frightens me, because I can see the outcome of addiction to sugar in myself. I said that the “fat acceptance” movement is an abyss of denial. I said the mannequin was “gargantuan” and “heaving with fat”. I said it might get diabetes – if it had flesh. I said that if it ran, it would ruin its inhuman knees.

I am an addict: to alcohol, to nicotine, to sugar. And now I think that, because of this, I wrote about the doll with self-hatred. I was ill with alcoholism when I was young, and the worst thing was my denial. I conquered alcohol by hating what it made me with such ferocity I was too scared to drink again. But I never got anywhere with food. I am stuck on food. So I said I hated the doll.

The piece appeared on Sunday. By Monday morning it was trending on Twitter. A friend emailed to tell me this, as if it were happy news: but she is a comic with the all the oddness peculiar to the comic. I do not write for attention, which is what I was accused of. I think it is more accurate to say that I write to conceal myself – and this time I failed.

It rolled around the world. It followed the sun. I was called fat-phobic in the South China Morning Post and elitist in the Irish Times. I became a person who hated women. My Wikipedia entry was changed to “Tanya Gold is fat and fat-phobic.” Within half a day I was an invented person, and that version of me, which I do not recognise, is more vivid than I am and will, I marvel, outlive any other version, no matter my future strivings. This invented person was fleshed out swiftly, like a doll, and this seemed, in retrospect, a suitable punishment. I was presumed to have opinions I have never held. A reply to a famous critic enclosed a list of inspirational mantras to protect against feminine self-hatred. I was presumed to be against all of them. If I wasn’t, I would not make sense.

If I am being honest, I should say that I do recognise the character that was made for me, as a new skin. It is the voice of my own addiction screaming at me, as it often does, but now with many voices. In that sense it is the worst thing I can imagine. I had been found out. I began to hate my own name.

My storm, though, was comparatively minor. I read Jon Ronson’s work about internet-shaming for context and comfort. In 2013, a PR called Justine Sacco wrote from Heathrow as she prepared to board a plane to South Africa: “Going to Africa. Hope I don’t get Aids. Just Kidding. I’m white!” It was a bad joke. She later said she intended to “mimic and mock what an actual racist, ignorant person would say of South Africa”. It didn’t matter. By the time she landed she was the number one trend on Twitter globally; there was an awful hashtag called #HasJustineLandedYet, designed to celebrate the annihilation of her name. She became a comforting scapegoat for every racist; and she was punished. She lost her job and, according to Ronson, she was devastated by it. And another example: in 2012, Lindsey Stone was photographed at the Arlington National Cemetery’s Tomb of the Unknowns, pretending to scream and “flip the bird” by the “Silence and Respect” sign. She was fired; a scapegoat for everyone who has ever been insensitive.

A famous Twitter storm shows how swiftly it can turn. In 2013, at a tech convention, a woman overheard a man making a bad joke about “a fictitious piece of hardware that has a really big dongle, a ridiculous dongle… It wasn’t even conversation-level volume”. The woman tweeted: “Not cool. Jokes about… ‘big’ dongles right behind me.” The man became a scapegoat for every misogynist in tech; he has three children and he lost his job. When hackers attacked her employer’s website, the woman was fired, too. Ronson believes that, at their heart, Twitter storms signify a desire for acceptance. If Sacco is entirely bad, then, by condemning her, others are entirely good. It makes the tweeting people seem vulnerable, and that is comforting.

Because Twitter is monomaniacal, almost no one defended me. Those who did – on the danger of obesity point, which flew away – received the same punishment. So what follows should not have surprised me. There is another Tanya Gold. She is an editor, and kindly; she sometimes forwards messages that have come to her in error, with wry comments. I wrote to her as it began: I’m sorry for what is coming. She replied: OK. She posted a note saying she was not the Tanya Gold who wrote the article. One of her friends wrote a hashtag #NotTHATTanya. They condoled with her for the hate mail. I was baffled that she was allowed an emotional response to the hate mail, which was mine, but I was not. Still, it was funny, in retrospect, watching people who had tweeted at her, returning in the spirit of maiden aunts once they learned their error. They were sodden with manners. One even offered her work. I couldn’t laugh at the time. I felt that the central narrative of my addiction – that I am two people, and one is good, and one is bad – had literally come to pass. Still, I was infamous.

I turned on Radio 4 and they were talking about me. Piers Morgan asked me to come on Good Morning Britain, so he could teach me to be a good feminist, and I wept.

In truth, I did not need my old name any more, because I had a new one: “Here’s a daily reminder,” wrote one Twitter correspondent, “that you: you’re a fucking cunt!!” They wrote satirically, misogynists day-dreaming of sexual violence: “Fuck you, Tanya Gold. Eat a dick.” Some people – women mostly – wrote to say they wanted to sit on my face.

My subversion enabled all other subversion. A woman with the Twitter name Miss Lucy P changed her Twitter name to Tanya Gold’s Husband (Who is Fat). Someone wrote: “I HOPE YOU DIE OF HEART DISEASE! YOU FUCKING OBESE WHORE!!! DIE ALREADY!!! KILL YOUR FUCKING SELF!!! OBESE WHORE!!!” This person is apparently a personal trainer. I replied, idly: “Would you look after my son?” “Bring your son to your grave,” he replied. “Would it,” a woman asked, “be horrible if I had a wish that Tanya Gold’s body turned up in a ditch somewhere?” She is apparently a watercolourist.

I knew that many of them were enjoying it; that I had provided an opportunity for them to express their goodness with minimal effort. A girl sent me a message: “My sister thinks ur [sic] a cunt.” She attached a video of a woman – the sister? – jumping around and laughing, her hands over her face.

They seemed fascinated that I am fat and unearthed photographs to prove it, including many zoomed in on my crotch. It does make sense. If I am a “fat cunt”, I must have a byline picture.

Many people did not read the piece. That would interfere with the purity of the rage, which is, quite clearly, a drug. After reading one long message, I understood that my correspondent had not actually read the article. “Though I was unable to read the entirety of the article due to refusal from subscriping [sic] to X and its vast conceptual wrongs,” she wrote: “I would like to address my problem with your article.” She then wrote a critique of an article she had not read, and which I had not written, and that is the most decadent thing I can imagine.

I could ignorethe worst abuse. I know it was not really about me as, in this particular situation, there was no me. It was about everyone who had ever hurt them, including themselves. It was projection; they were re-enacting what I had done to the doll upon me. So the painful ones were passive aggressive: “So I’m urging you to please do better. Please. Reach out and listen to those in the community. Retract this article. Apologise. Make a donation to a group that helps protect human rights, including for those who are big.” (They wanted money?) Some were so grandiose I should have been pleased: “[Tanya is] Something to unite us after Brexit.” But I wasn’t. Rather, I felt there was nothing in me left to love. All in all it lasted 72 hours.

“I know how awful it is,” a journalist wrote to me, “but they do go away. Twitter storms are like real storms. The bigger they are, the better the weather is afterwards.” I recovered by searching for reality. I had become unreal, so I made something real. I wrote to a correspondent who had said: “Can’t you understand that the language you used suggests a disgust of fat people? If you cared about the health of these women you might have used more clinical language with statistics rather than the hyperbolic language you used.”

I replied that I thought my language was too vicious. She thanked me for listening. I said I was addicted to sugar. She said she had a serious condition that was not related to obesity, but that the doctors had almost missed because she is obese. And that was the ending: a conversation from which we both learned something and from which we parted courteously. Once I had reclaimed myself from my avatar I was no longer hateful, at least to myself.