The Long Read: In the heartland of the American right, people harmed by polluting industries have instead come to hate the government whose environmental regulations protect them. Now theyre voting for Donald Trump 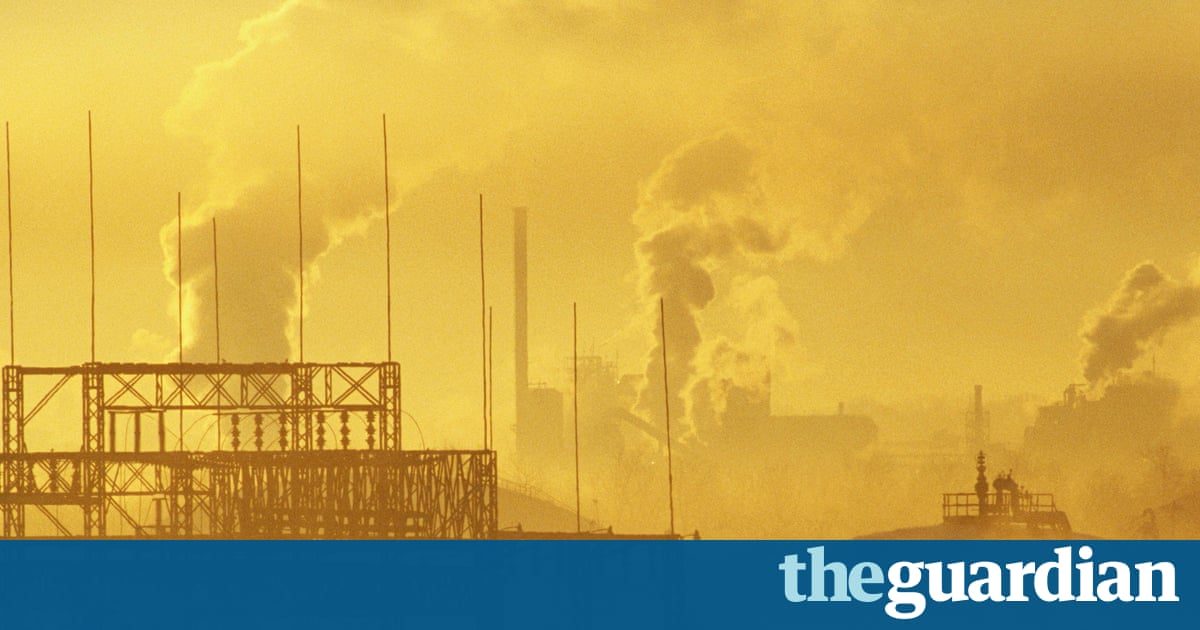 There he is, seated on his wooden front porch overlooking a trim yard in suburban DeRidder, Louisiana, watching for my car. He rises from his chair, waving with one arm and steadying himself on his walker with the other. A large-chested, 6ft 3in man with a grey crewcut and blue eyes, Lee Sherman, age 82, gives me a welcoming smile. A player for the Dallas Texans football team (later renamed the Kansas City Chiefs) for two years, an honoree in Whos Who of American Motorsports, a Nascar racer who drove at 200 miles an hour in a neck brace and fire suit, and the proud purchaser of a waterski boat once owned by TVs Wonder Woman, he shakes my hand, apologising, Im sorry to be on this thing, he points to his walker, and not take you through the house properly. He doesnt feel like his old self, he says, but accepts his feeble legs good-naturedly. Given his dangerous work at the petrochemical company, Pittsburgh Plate Glass (PPG), he is happy to be alive. All my co-workers from back then are dead; most died young, he tells me.

As a young man, Sherman trained as a coppersmith in the US naval shipyards outside Seattle, where his dad worked as an electrician. When travelling south for work in 1965, he was hired by PPG as a maintenance pipefitter and soon earned a reputation as a mechanical genius.

He was fearless and careful, a good fit for his hazardous job fitting and repairing pipes carrying lethal chemicals such as ethylene dichloride, mercury, lead, chromium, polycyclic aromatic hydrocarbons, and dioxins.

At one point, Sherman narrowly escaped death, he tells me, taking a careful, long sip of coffee. One day while he was working, cold chlorine was accidentally exposed to extreme heat, which instantly transformed the liquid to gas. Sixteen workers were in the plant at the time. Noting that the company was short of protective gear, Shermans boss instructed him to leave. Thirty minutes after I left, he says, the plant blew up. Five of the 15 men I left behind were killed. The next afternoon, Shermans boss asked him to help search for the bodies of the dead workers. Two were found, three were not. Acid had so decomposed the body of one of the three victims that his remains came out in pieces in the sewer that drained into a nearby bayou. If someone hadnt found him, Sherman says, turning his head to look out of his dining room window, that body would have ended up floating into Bayou dInde.

In the 1960s, safety was at a minimum at PPG. During safety meetings, Sherman tells me, the supervisor just gave us paperwork to fill out. Working with the chemicals, we wore no protective facial masks. You learned how to hold your nose and breathe through your mouth.

The company didnt much warn us about dangers, he says, adding in a softer voice, My co-workers did. Theyd say, You cant stand in that stuff. Get out of it. I wouldnt be alive today, if it werent for my co-workers.

The pipes Sherman worked on carried oxygen, hydrogen, and chlorine, and when a pipe sprung a leak, he explains, I was the guy to fix it.

Did you use your bare hands? I ask.

Eventually the general foreman issued badges to the workers to record any overexposure to dangerous chemicals, Sherman says, but the foreman made fun of them. Its supposed to take two or three months before the gauge registers youve reached the limit. My badge did in three days. The foreman thought Id stuck it inside a pipe!

Accidents happened. One day, Sherman was standing in a room, leaning over a large pipe to check a filter, when an operator in a distant control room mistakenly turned a knob, sending hot, almond-smelling, liquid chlorinated hydrocarbons coursing through the pipe, drenching him. It was hot and I got completely soaked, Sherman tells me. I jumped into the safety shower and had the respirator in my mouth, so I wasnt overcome. But the chemical was burning pretty bad. It really gets you worst underneath your arms, in between your legs, up your bottom. Despite the shower, he said, The chemical ate off my shoes. It ate off my pants. It ate my shirt. My undershorts were gone. Only some elastic from my socks and my undershorts remained. It burned my clothes clean off me.

As a result of the things he suffered, saw, and was ordered to do as a pipefitter in the petrochemical plant, Sherman became an ardent environmentalist. Calcasieu Parish, in which he worked for 15 years at PPG, is among the 2% of American counties with the highest toxic emissions per capita. According to the American Cancer Society, Louisiana has the second-highest incidence of cancer for men and the fifth-highest male death rate from cancer in the nation.

But Sherman has recently volunteered to post lawn signs for the Tea Party congressman John Fleming, whofavours cutting the Environmental Protection Agency (EPA), weakening the Clean Air Act, and oil drilling on the outer continental shelf of the US, as well as opposing the regulation of greenhouse gases and backing less regulation of Wall Street. Sherman is a regular at meetings of the DeRidder Tea Party, wearing his red, white and blue party T-shirt, which features an eagle sharpening its talons. So why was Sherman the environmentalist eager to plant lawn signs for a politician calling for cuts in the EPA?

If I could answer this question, maybe I could unlock the door to what I came to call the Great Paradox.

I had begun my five-year journey to the heart of the American right carrying with me, as if it were a backpack, a great paradox. Back in 2004, there was a paradox underlying the rightleft split. Since then the split has become a gulf.

Across the country, conservative red states are poorer and have more teenage mothers, more divorce, worse health, more obesity, more trauma-related deaths, more low-birth-weight babies, and lower school enrolment. On average, people in red states die five years earlier than people in liberal blue states. Indeed, the gap in life expectancy between Louisiana (75.7) and Connecticut (80.8) is the same as that between Nicaragua and the United States. Red states suffer more in another important but little-known way, one that speaks to the very biological self-interest in health and life: industrial pollution.

The right now calls for cuts in entire segments of the federal government the Departments of Education, Energy, Commerce, and Interior, for example. In January 2015, 58Republicans in the House of Representatives voted to abolish the Internal Revenue Service, which is responsible for the collection of taxes. Some Republican congressional candidates call for abolishing all state schools. In March 2015, the Republican-dominated Senate voted 51 to 49 in support of an amendment to a budget resolution to sell or give away all non-military federal lands other than national monuments and national parks. This would include forests, wildlife refuges, and wilderness areas. Joined by 95 Republican congressmen, Senator David Vitter of Louisiana, one of the most polluted states in the union, has called for the end of the EPA.

The Tea Partys turn away from government may signal a broader trend. During the depression of the 1930s, Americans turned to the federal government for aid in their economic recovery. But in response to the great recession of 2008, the majority turned away from it. As the political divide widens and opinions harden, the stakes have grown vastly higher. Neither ordinary citizens nor leaders are talking much across the aisle, damaging the surprisingly delicate process of governance itself. The United States has been divided before, of course. During the civil war, a difference in belief led to some 750,000 deaths. During the stormy 1960s, too, clashes arose over the war in Vietnam, civil rights, and womens rights. But in the end, a healthy democracy depends on a collective capacity to hash things out. And to get there, we need to figure out whats going on especially on the rapidly shifting and ever-stronger right.

Lee Shermans work at PPG was a source of personal pride, but he clearly did not feel particularly loyal to the company. Still, he did as he was told. And one day in the late 1960s, after his acid bath, he was told to take on another ominous job.It was to be done twice a day, usually after dusk, and always in secret. In order to do this job, Sherman had to wield an 8ft-long tar buggy, propelled forwards on four wheels. Loaded on this buggy was an enormous steel tank that held heavy bottoms the highly viscous tar residue of chlorinated hydrocarbon that had sunk to the bottom of kitchen-sized steel vessels. A layer of asbestos surrounded the tank, to retain heat generated by a heater beneath the buggy. Copper coils were wound around its base. The hotter the tar, the less likely it was to solidify before it was dumped.

Working overtime in the evenings, under cover of dark, his respirator on, Sherman would tow the tar buggy down a path that led towards the Calcasieu Ship Channel in one direction and towards Bayou dInde in another.