Labor and economic equality used to be at the heart of liberal politics. Rich professionals expunged these concerns and have reaped the consequences 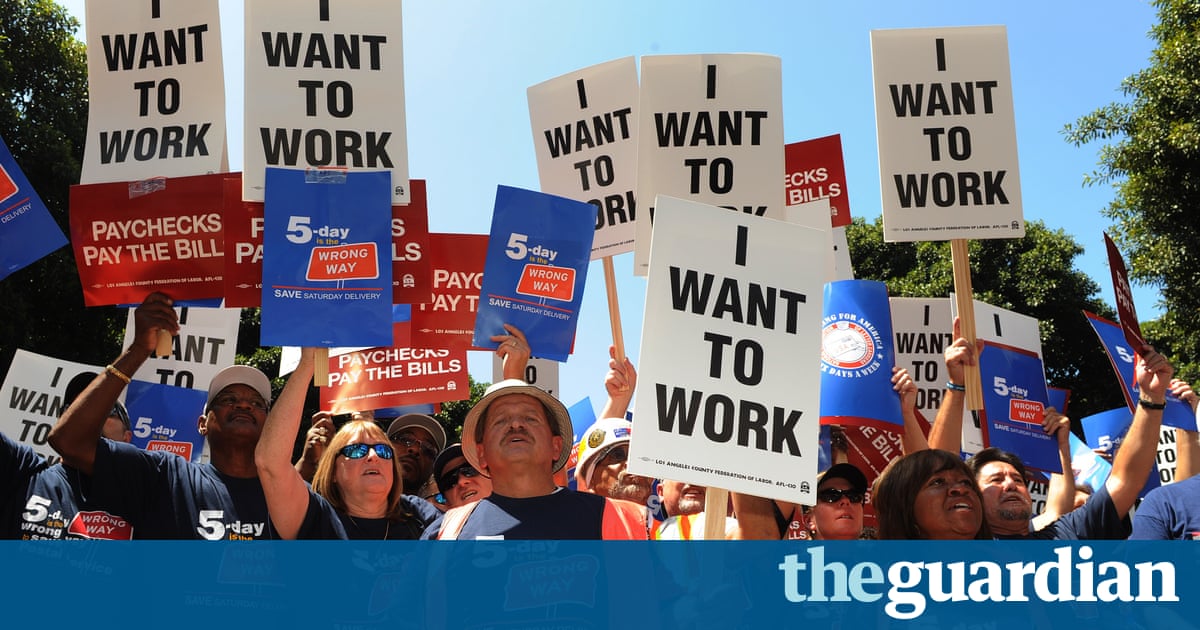 What makes 2016 a disaster for Democrats is not merely the partys epic wipeout in Washington and the state capitals, but that the contest was fought out on a terrain that should have been favorable to them. This was an election about social class about class-based grievances and yet the Party of the People blew it. How that happened is the question of the year, just as it has been the question of other disastrous election years before. And just like before, I suspect the Democrats will find all manner of convenient reasons to take no corrective action.

But first let us focus on the good news. Donald Trump has smashed the consensus factions of both parties. Along the way, he has destroyed the core doctrine of Clintonism: that all elections are decided by money and that therefore Democrats must match Republican fundraising dollar for dollar. This is the doctrine on which progressive hopes have been sacrificed for decades, and now it is dead. Clinton outspent Trump two-to-one and it still wasnt enough.

Neither were any of the other patented maneuvers of Clintonism. With Hillary carrying their banner, the Democrats triangulated themselves in every way imaginable. They partied with the Wall Street guys during the convention in Philadelphia, they got cozy with the national security set, they reached out to disaffected Republicans, they reminisced about the days of the balanced federal budget, they even encouraged Democratic delegates to take Ubers back and forth from the convention to show how strongly Democrats approved of what Silicon Valley was doing to America. And still they lost.

This is important because winning is supposed to be the raison detre of centrism. Over the years, the centrists have betrayed the Democratic partys liberal base in all sorts of ways deregulating banks, securing free trade deals, signing off on Wall Street bailouts and the Iraq war. Those who bridled at all this were instructed to sit down and shut up because the Clintons and their triangulating ilk were the practical ones who would bring us victory.

Except that they dont. This year the Republicans chose an honest-to-god scary candidate, a man who really ought to have been kept out of the White House, and the partys centrists choked. Instead of winning, the pragmatists delivered Democrats to the worst situation theyve been in for many decades, with control of no branch of the federal government and only a handful of state legislatures. Over the years, and at the behest of this faction, Democrats gave up what they stood for piece by piece and what they have to show for it now is nothing.

Another shibboleth that went down with the Hillary Titanic is the myth of the moderate swing voter, the sensible suburbanite who stands somewhere between the two parties and whose views determine all elections. These swing voters are usually supposed to be liberal on social issues and conservative on economic ones, and their existence gives a kind of pseudoscientific imprimatur to Democratic centrism.

For years people have pointed out that this tidy geometry doesnt really make sense, and today it is undeniable: the real swing voters are the working people who over the years have switched their loyalty from the Democrats to Trumps Republicans. Their views are pretty much the reverse of the standard model. On certain matters they are open to conservative blandishments; on economic issues, however, they are pretty far to the left. They dont admire free trade or balanced budgets or entitlement reform the signature issues of centrism they hate those things. And if Democrats want to reach them, they will have to turn away from the so-called center and back to the economic left.

There are some indications that Democrats have finally understood this. Elizabeth Warrens star is on the rise. Bernie Sanders is touring the country and reminding people that class politics are back whether we like it or not. Keith Ellison is running for chairman of the Democratic National Committee.

But the media and political establishments, I suspect, will have none of it. They may hate Donald Trump, but they hate economic populism much more. If history is a guide, they will embrace any sophistry to ensure that the Democrats do not take the steps required to broaden their appeal to working-class voters. They will remind everyone that Clinton didnt really lose. Alternately, they will blame Sanders for her loss. They will decide that working-class people cannot be reasoned with and so it is pointless to try. They will declare are already declaring that any Democratic effort to win over working-class voters is a capitulation to racism. Better to lose future elections than to compete for the votes of those who spurned their beloved Clinton.

I suspect this will happen because this has been happening for decades; because Democrats always find a reason to put off doing what they need to do to win back the white working class. The example that springs immediately to mind is the election of 2004, when the Bush-Rove team used a variety of ingenious culture-war offensives to beat a different centrist Democrat. For several months after that debacle, Democrats contorted themselves in self-examination. They wondered about what had happened with the white working class, how they had managed to lose so many of those voters, and so on. It was especially memorable for me because my book about blue-collar conservatism in Kansas was often part of the conversation.

But before very long, the self-examination ceased. Democrats were reassured by their friends in political science that they really had no problem with the working class and that they neednt be concerned. With a few statistical sleights of hand and enormous heaps of professional contempt for the laity, academics helped to shut down that debate.

And here we are again. Today Democrats are wondering what went wrong, but before too many fundraising dinners have been digested they will have concluded they dont need to worry, that demographics will bail them out sooner or later, and that the right and noble course of action is to proceed as before.

This will happen because what leading liberals cannot understand what they are psychologically blocked from understanding is thatthe problem isnt really the white working class. The problem is them.

Let me explain what I mean by reminding you what this form of liberalism looks like. Somewhere in a sunny corner of the country, either right now or very shortly, a group of tech tycoons or well-meaning private equity investors will meet to discuss what went wrong in this election cycle. They will consider many things: the sexism and racism of Trump voters, the fundamental foreignness of the flyover, the problems one encounters when dealing with evangelicals. They will celebrate some activist they learned about from NPR, they will enjoy some certified artisanal cuisine, they will hand out prizes to the same people that got prizes at the last event they attended, and they will go back to their comfortable rooms at the resort and sleep ever so soundly.

These people think they know what liberalism includes and what it doesnt include. And in the latter category fall the concerns that made up the heart and soul of liberal politics a few decades ago: labor and work and exploitation and economic equality.

To dedicate your life to concerns like these today is to sign up for obscurity and frustration. Its to enter a world without foundation grants, without appearances on MSNBC, and without much job security. Nothing about this sphere of liberal activism is fashionable or attractive. Books on its subjects go unreviewed and unread. Strikes drag on for weeks before they are noticed by the national media. Labor organizers are some of the hardest-working but least-thanked people I know. Labor reporters are just about extinct. Promises to labor unions are voided almost as soon as they leave a politicians lips.

If rich liberals had listened to such people, Donald Trump might not have been able to lure away so many millions of working-class voters. Maybe they will change their ways now? Perhaps the well-meaning folks at those Florida resorts will finally close ranks with working people and their representatives?

Put the question slightly differently: will the Washington Post or the New York Times take the sad fate of Democratic centrism as a signal to bring a whole new vision to their op-ed pages? Will NPR finally say to its cast of well-graduated tastemakers: you missed it just one time too many? Will the thinktanks and pressure groups of Washington finally be told by their donors: were shifting your grant money to people who care about deindustrialization?

I doubt it. Liberalism today is an expression of an enlightened professional class, and their core economic interests simply do not align with those of working people. One thing we know about professionalism is that it exists to shield insiders from public accountability. If coming up with a solution to what ails liberalism means listening to people who arent part of the existing nonprofit/journalistic in-group, then there will be no solution. Liberals would rather lose than do that.

If the unreconstructed Democratic party is to be saved, I suspect, what will save it is what always saves it: the colossal incompetence of the Republicans. This, too, we can already see coming down the rails. Donald Trump is getting the wrecking crew back together, and before too long, I suspect, he will have the country pining for Hillary Clinton.