Legislators raise minimum wage to $15 and agree to allow workers to take up to 12 weeks of leave to care for a baby, sick child, partner or dying parent 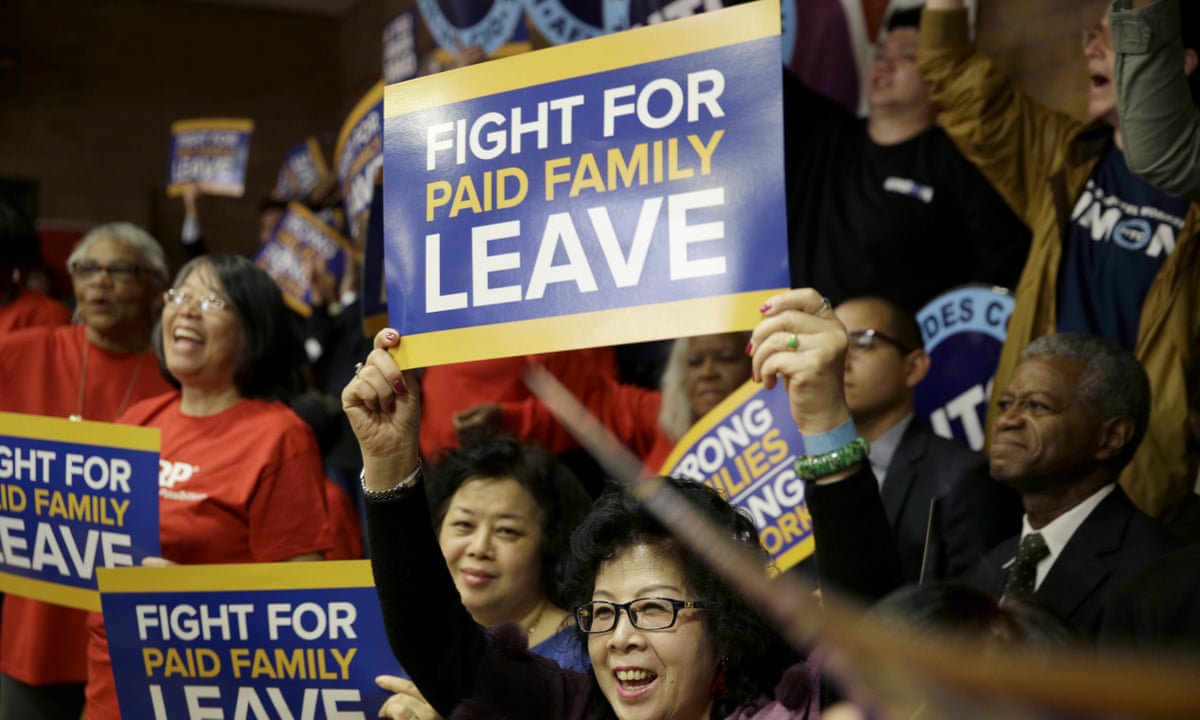 New York state has announced plans for the most far-reaching paid family leave law in America, as well as promising to raise the minimum wage to $15 an hour.

The state will mandate the right to 12 weeks of paid leave for both private sector workers asking for time off to care for a new baby and workers who need to look after a sick child or partner, a dying parent or other such family emergency.

The system is designed to be paid for with insurance-style funds made up of fees deducted from pay packets, rather than costing companies directly.

After long and largely unsuccessful battles to improve notoriously stingy maternity leave rights across the country, the New York law will introduce an extensive and egalitarian model which advocates hope will now influence other states and federal lawmakers.

New York governor Andrew Cuomo announced late on Thursday that the state legislature had agreed the new policy on paid family leave. In addition, he promised to increase the state minimum wage, in phases, from $9 to $15 an hour over two to six years.

Employees rights advocates are calling the wage boost a revolution in the workplace.

I believe this is the best plan the state has produced in decades, Cuomo said after long hours of negotiations in Albany brought agreement on the next annual budget, which includes the new measures.

The right to three months of paid family leave a year will be offered to mothers and fathers adopting or fostering as well as having their own biological children. It will be mandated for men and women needing to nurse a sick partner, spouse, parent or other family member.

New York is only the fifth state in the US to adopt a paid family leave law. California implemented such a law in 2004, but it only offers six weeks of paid leave, as do provisions passed in New Jersey in 2009 and Rhode Island in 2014. Washington state adopted a similar measure in 2007 but has yet to put it into practice.

Federal family and medical leave laws passed in 1993 under Bill Clintons administration only guaranteed 12 weeks of unpaid leave and job protection, and excluded companies with fewer than 50 employees.

New Yorks new law will guarantee pay and applies to small businesses as well as large companies. It covers the private sector; public sector unions can opt in.

This is the most robust paid family leave program in the US, its tremendous and will be a revolution in the workplace and for economic justice, said Donna Dolan, executive director of the Time to Care New York Paid Leave Coalition, a campaign group with corporate and union members that has been battling for better leave rights for more than 15 years.

Dolan pointed out that America is still far behind the rest of the developed world; countries such as the UK offer 40 weeks of paid maternity leave. But she called New Yorks plan a pacesetter.

Its just not on their radar screen, she said.

New York senator Kirsten Gillibrand has co-sponsored a bill mandating national paid family leave, but, Dolan said, it has no chance of passing a Congress paralyzed by partisan legislative gridlock and controlled by Republicans.

Mandated paid family leave in New York state will begin in 2018 with employees being docked approximately 70 cents a week from their pay. The money will be paid into a family leave insurance fund, and the program will be phased in over three to four years.

According to the New York state department of labor, workers paid at or below the state average weekly wage, which in 2014 was $1,266.44, will receive two thirds of their average pay while on family leave. The program will be capped at the state average, so higher-paid workers will lose out.

This program will be funded entirely through a nominal payroll deduction on employees, so it costs business, both big and small, nothing, Cuomo said.

The Business Council of New York State, which represents thousands of companies and chambers of commerce, is opposed to the plan as well the $15 minimum wage.

We are disappointed with the multi-billion dollar increase in the minimum wage [and] further discouraged that the budget deal includes the most expansive paid family leave law in the nation while leaving out meaningful business cost reductions, said Heather Briccetti, chief executive of the business council, in a statement.

Debating whether you want to stay home and lose out on pay, or maybe even lose your job, is awful, she said. If you go into work you are worried, you are distracted. We are very excited by this new law.

She added that the wide reach of the law, beyond maternity leave, had likely made it more popular and relevant, therefore winning it easier passage through the legislature.

Cuomo talked about deeply regretting not spending more time with his dying father in 2014. His wife recently had surgery for breast cancer.

Upstate, Jan Rhodes Norman, a small business owner and co-founder of the Local First Ithaca business association, said she would have preferred the state to have announced more tax cuts for businesses in tandem with the new laws. Overall, she supported the paid family leave plan.

America is so behind other developed countries in not having this sort of safety net and we need to be moving in that direction, she said.