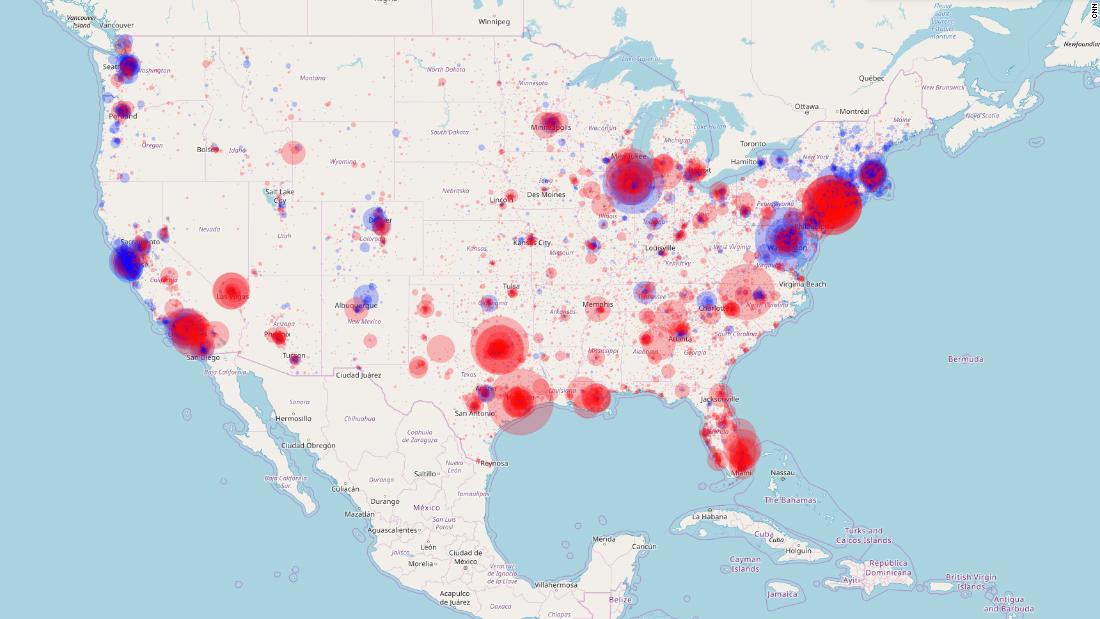 (CNN)The 2018 midterm elections are on pace to be the most expensive in history, with record-smashing fundraising fueling a geyser of campaign spending. At the forefront of the battle for Congress, and in particular the US House of Representatives, are the various national party committees — the Republican National Comittee (RNC), the National Republican Congressional Committee (NRCC), the Democratic National Committee (DNC), and the Democratic Congressional Campaign Committee (DCCC).

California and New York, the first and fourth most populous US states, dominate the field for both parties, due to their unparalleled size and wealth, though the states’ politics gives Democrats a significant edge in both. Republicans mostly make up for that disadvantage with a big edge in Texas, and a slighter edge in Florida and Nevada.
In September, the DNC and DCCC received by far the most money from zip codes in California and New York, preponderant even given their size. Of the top 25 zip codes ranked by total contributions, nearly all cover various parts of big cities in the biggest blue states: twelve zip codes from California, all from areas around Los Angeles, San Francisco and San Diego; four zip codes from New York City; and three others from parts of Chicago, Illinois.
But the zip code giving the most money to the Democratic committees: 20815, which includes parts of Silver Spring and Chevy Chase in Maryland, just outside of DC. Donors from that zip code have given nearly $400,000 to the Democratic committees. And it’s an area that’s been far less generous to Republicans, ranking just 1,651st on the list of zip codes giving to the RNC and NRCC, to the tune of just $1,405. A total of three DC-area zip codes were among the top 25 for Democrats.
Other top zip codes for the Democratic committees include: 60601, covering parts of Chicago, ranked second with around $345,000 in contributions; 10024, covering parts of New York City, ranked third with around $221,000 in contributions; and 90024, covering parts Los Angeles, with just over $200,000 in contributions.
Los Angeles has proved particularly bountiful for Democrats. The six L.A. zip codes, covering various parts of the sprawling metropolis including Beverly Hills and Santa Monica, combined to contribute just over $700,000. Northern California — San Francisco and Palo Alto in particular — has also been fertile ground, with five zip codes in the top 25, combining for nearly $550,000.
Also in the top 25 for Democrats: Boston, Massachusetts; Greenwich, Connecticut; and Santa Fe, New Mexico. Greenwich — one of the wealthiest cities in the country — was one of the few small cities to appear on the top 25 for both Democrats and Republicans, ranking 21st for Republicans and 23rd for Republicans.
Like the Democrats, the Republican donor base is correlated with a region of the country the party dominates politically — Texas. Four Texas zip codes rank among the top 10, covering parts of Houston and Dallas, with donors from those areas combining to contribute nearly $1.5 million to the RNC and NRCC.
California and New York are still well represented on the list of top zip codes giving money to Republicans, their relative size and wealth overwhelming their politics. A New York City zip code — 100019, which directly abuts but does not include Trump Tower — was ranked second, with about $415,000 in contributions, behind 77002 in first place, covering parts of Houston, which contributed nearly $540,000. And the fabled 90210 zip code — Beverly Hills, California — ranked sixth, contributing nearly $300,000 to the GOP committees. The zip code that includes Trump Tower, 10022, ranks 24th for Republicans at about $160,000 and the zip code that includes the President’s Mar-a-Lago club in Florida, 33480, ranks 23rd for Republicans at about $165,000.
Four Florida zip codes actually ranked among the top 25 for Republicans, though none from Florida ranked among the Democrats’ top 25. Zip codes covering parts of Palm Beach, West Palm Beach, Vero Beach, and Jupiter combined to give about $725,000 to the RNC and NRCC.
Las Vegas was also more generous toward Republicans than Democrats, with two Las Vegas zip codes in the GOP top 25, combining for just about $385,000. In twenty-fifth place: Anchorage, Alaska, with nearly $160,000.