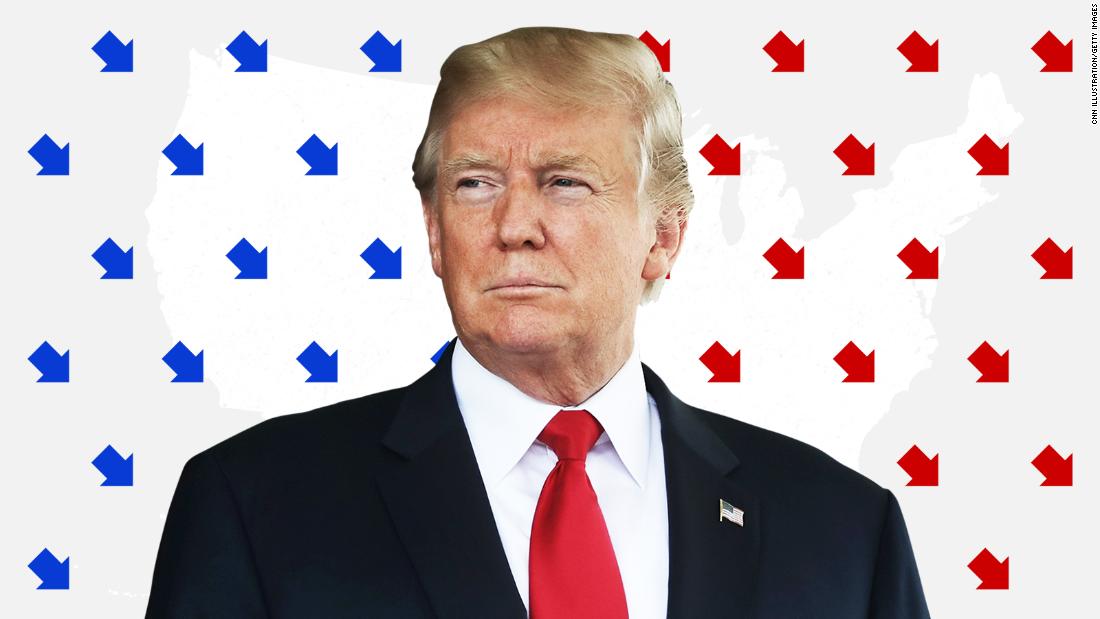 (CNN)Midterms are a base election, but how big is Trump’s base? We all know he brags about being the most popular president in the Republican Party (more popular than Abraham Lincoln, he says!). In the most recent CNN poll conducted by SSRS, the President’s approval rating was 36%, which is not a record low, but not very good either.

But there are a number of ways to look at the available polling and election data to determine who exactly supports Trump and what portion of the population they represent.
In that CNN poll, he was under water with most of the population, but among Republicans his approval was at 82%, where it has been fluctuating since the beginning of his term. But the number of Americans who identify with a party has been on the decline. And while Republicans currently control every lever of power in Washington, they represent a smaller portion of the population than either Democrats or independents, although many independents may lean toward the GOP.
Pew Research tracks party identification with the most recent numbers showing a quarter who say they’re Republicans, 31% Democrats, and 38% independents. There hasn’t been a lot of fluctuation in recent years, except a small bump in 2016 (competitive primaries often cause this).
The US system, however, really only offers two options, so while fewer people identify with parties, those are the options they have on Election Day. That’s, in part, how someone like Trump can lose the popular vote, but win the Electoral College. So does half of the country approve of the job he’s doing? Did half the country vote for him? Again, not exactly. The 82% of the Republicans who approve of the job he is doing only translates to 20% of the country, overall.
If you take CNN’s approval rating number and party identification and break it up into segments of the total population, only 20% of the US population over the age of 18 are Republicans who approve of Trump.
Not all Trump supporters are Republicans, which is why his approval rating has been in the mid-30s rather than the mid-20s. Fourteen percent of people in the US are independents who approve of Trump and just 2% are Democrats who approve of him.
However, there are more independents who disapprove of Trump (25%) and Democrats who disapprove of Trump (30%) than Republicans and independents who approve of him, hence why his disapproval overall is higher than his approval.
The entire US population was about 318 million in 2016. Subtracting out those under the age of 18, the US voting age population in 2016 was approximately 244,807,000, according to the US Census figures. Exactly 136,669,237 people voted in the presidential election, according to the official results. That means approximately 55.8% of the population voted.
Of those, 62,984,825 voted for Trump and 65,853,516 voted for Hillary Clinton. As percentages, 25.7% of the US voting age population voted for Trump and 26.9% of the US population voted for Clinton.
Another 7,830,896 (3.2% of the US population) voted for third parties. That means 108,137,763, or about 44.2% of the population, didn’t vote.
This is an imperfect way of viewing things, obviously. That 244.8 million Americans includes nearly 21 million voting-age non-citizens living in the US.
That only a little more than a quarter of adults voted for either Trump or Clinton in the election is an extreme reminder that about half of the population over the age of 18 either wasn’t interested enough in the election or was too disgusted by both candidates.
That’s not exactly a new phenomenon. A smaller portion of the population voted in 2016 than in any election since 2000 and only 53.5% of Americans voted in 1996.
Turnout in midterm elections is usually even much lower. In 2014, 33.2% of the voting age population voted, according to electproject.org. In 2010, an election in which Republicans took the House from Democrats, it was 37.8% and the last time Democrats took the House from Republicans, in 2006, it was 37.2%.
It’s long been a relatively small portion of the population that decides who controls the government.