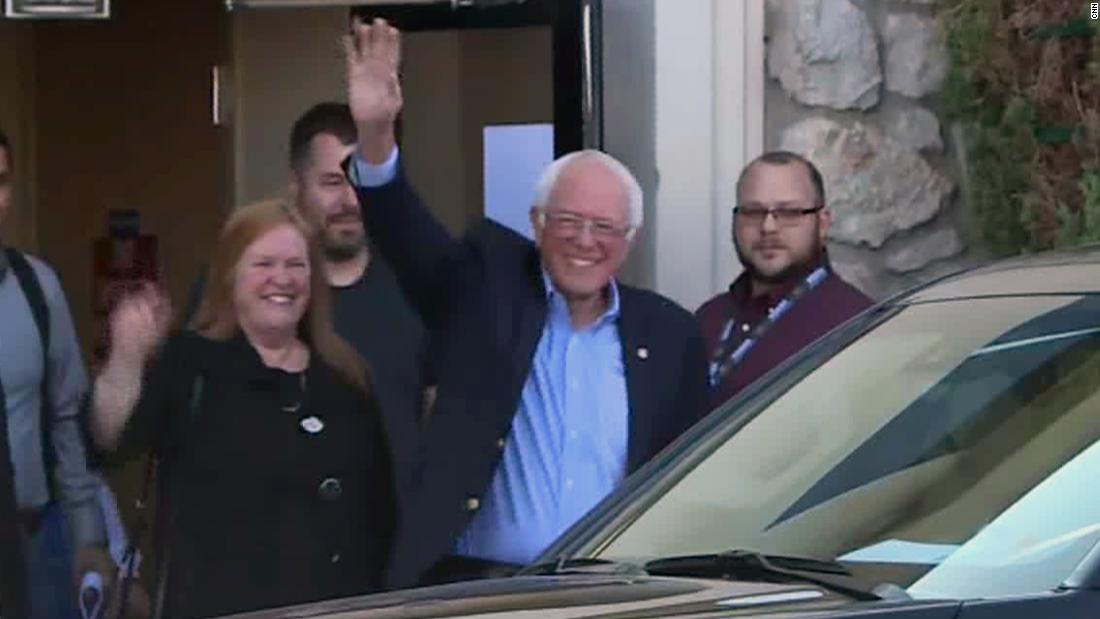 (CNN)Bernie Sanders’ heart attack suffered on the campaign trail last week thrusts a tough issue to the front of the 2020 presidential race: How old is too old to be president?

But he’s not the only candidate in the Democratic field who will be affected by Sanders’ heart attack in the race. While Sanders, at 78, is the oldest candidate in the contest, former Vice President Joe Biden is 76, and Massachusetts Sen. Elizabeth Warren is 70. If any of them were elected president next November, they would become the oldest person ever elected to a first term as president. The man whose record they would break? Donald Trump, who was 70 when he won in 2016.
Given that the three frontrunners for the Democratic nod are septuagenarians, the age/health question has been a low buzz in the race from the start. But with Biden, Warren and Sanders keeping schedules that would exhaust this 43-year-old in about a day’s time, there’s been little to hang those worries on.
That’s now changed — in a fundamental way. While Sanders and his campaign (and his supporters) are quick to downplay how serious (or not) this heart attack was for the Vermont senator, it’s hard to get away from this fact: Sanders, a 78-year-old man, had a heart attack that required surgery. While there are lots and lots of people who have this exact experience, most of them are not running for president. And no one disputes that being president — or even running for it — is a hugely stressful job.
Sanders, Biden and Warren have all previously pledged to release their medical records before the Iowa caucuses on February 3, 2020. “What health concerns, man?” Biden joked last month when asked about releasing his medical record. “You want to wrestle?”
The timeline for those disclosures — yes, for all three candidates — is likely to accelerate now. Because while it’s true that Sanders is the one with the current medical issues, the focus on health and age means that Biden and Warren have to assume they will be getting more questions about those subjects on the campaign trail, too. (Worth noting: Trump released almost no medical records during his 2016 campaign; in his 2019 physical, the physician to the President described him as in “very good health overall.”)
What’s fascinating — and potentially tough for all three candidates — is that the public appears to have decidedly mixed feelings about older candidates running for president.

In a May Pew Research Center poll, just 3% of Democrats said their ideal candidate would be in their 70s. A near-majority — 47% — said a candidate in their 50s would be best. On the other hand, more than 6 in 10 people told Gallup in May they would vote for a presidential candidate over 70 years old, a larger block than said they would vote for an atheist to be president. (A higher percentage — 71% — said they would vote for a candidate under 40.)
There’s also some element of uncertainty built into polling about such a sensitive topic as age. Do people pull punches when talking about how much age matters to their vote when talking to a complete stranger in a poll? Do they actually care more than they would ever admit to a pollster?
That’s a question we don’t know the answer to. Especially because some of these decisions and opinions may well be based on specific candidates and how they seem to be aging. After all, we know that one man’s 76 isn’t another man’s 76. Hell, Bruce Springsteen is 70 and looks like he is about 50!
One thing we can say for sure is that something has changed in the race in the wake of Sanders’ heart attack. The burden of proof has now shifted directly to Sanders and, to a slightly lesser extent, Biden and Warren.
Rather than their opponents needing to find some non-tacky way to raise the age question, that trio now has to find ways to address voter concerns about it. Which is a subtle but important shift — particularly given that it is very hard to ask questions about whether candidates are too old without getting major blowback. (See Julián Castro’s swing-and-miss on that front in the third presidential debate.)
Sanders is expected to appear at the fourth debate, sponsored by CNN and The New York Times, next Tuesday in Ohio. He — as well as Biden and Warren — should expect to get at least one question on age/health/medical record release. And you can be sure voters will be paying very close attention to how they respond.