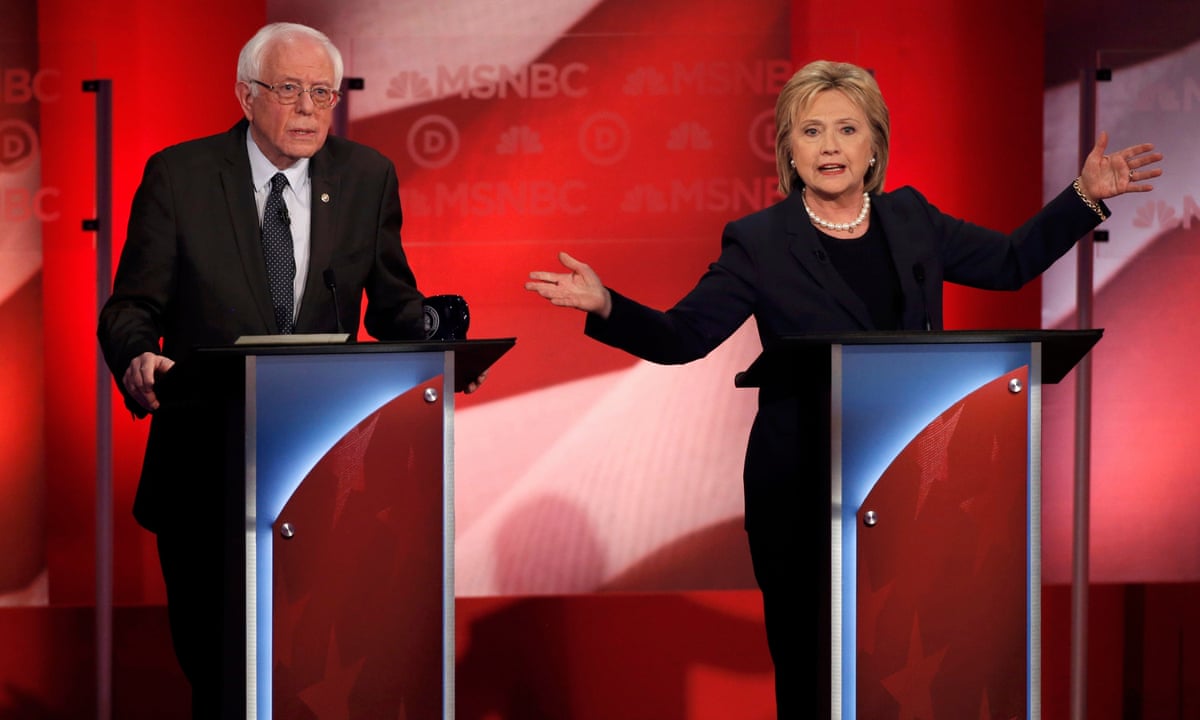 A fired-up Hillary Clinton tore into Bernie Sanders on Thursday, in the pairs first head-to-headdebate of the Democratic primary season, as the former secretary of state used her surprise position as the underdog in New Hampshire to turn the spotlight on her rivals insurgent campaign.

In some of the fiercest exchanges of the 2016 presidential race so far, Clinton accused her challenger of artfully smearing her with innuendo and insinuation by suggesting payments from Wall Street were a sign of corruption.

If you have something to say, say it, she demanded, as the absence of the recently-departed third candidate Martin OMalley left Sanders frequently on the ropes with little pause between volleys from Clinton and MSNBC moderators.

At times looking bruised by the onslaught, Sanders doubled down on his argument that extensive lobbying by the finance, pharmaceutical and energy industries were a major reason they had enjoyed favourable deregulation from Congress.

Clinton responded that she was an enemy, not an ally, of Wall Street. Hedge fund guys are trying so hard to stop me, she claimed. But a flustered Sanders failed to point out that Clinton had attended a fundraiser in Philadelphia hosted by hedge fund managers only last week.

The Vermont senator was also left on the defensive over foreign policy, where he admitted his one speech on the subject had failed to convey his strategy clearly enough.

Attempting to turn the subject back to Clintons support of intervention in Iraq and Syria, Sanders was accused of the same complaint his supporters level at the secretary over domestic affairs: that he is failing to convey a strong alternative vision for the future.

A vote in 2002 is not a plan to defeat Isis, said Clinton, referring to her vote for the Iraq war during her time as a senator for New York. We have to look at the threats we face now.

At times, there appeared a concerted effort to highlight Sanders relative lack of experience on foreign affairs. His position as a clear frontrunner among New Hampshire voters gave moderators a green light to focus on him much as Clinton has endured the brunt of past questioning.

MSNBC moderator Chuck Todd asked him to rank North Korea, Iran and Russia in order of their threat to the US. The former secretary of state nodded and smiled, safe in the knowledge that no matter how solid the answer, it would contrast poorly with her expertise.

North Korea is a very, very strange country because it is so isolated, and I do feel that a nation with nuclear weapons, they have got to be dealt with. Dealt with effectively, Sanders said of his pick for biggest threat.

Senator Sanders, so just explain how you spent nearly two decades in Congress and havent gotten any of these things passed, Todd asked during a similar grilling over his core economic goals of universal healthcare and free public college tuition. Why do you think as president youll be able to achieve big, big new programs like this?

Well, I havent quite run for president before, retorted Sanders to sympathetic laughter from the audience gathered at the University of New Hampshire campus in Durham.

Sanders appears to have up to a two to one polling lead over Clinton in the state, which is seen as his home turf due to its proximity to Vermont, despite the secretarys own history as senator of the other nearby state of New York.

But Clinton is still a comfortable favourite in polling at the national level and her team argued earlier that day that if she can shrink his lead to single digits in the New Hampshire primary on Tuesday, she will have blunted the surprise momentum that unnerved supporters when he came within a whisker of beating her in Iowa.

Both candidates declined to re-examine Mondays contentious caucus result, which was described as a debacle on Thursday by the Des Moines register, the states leading newspaper after her win came down to less than 0.3 of a percentage point.

I agree with the Des Moines Register, but lets not blow this out of proportion, said Sanders. This is not the biggest deal in the world we think we may have at least two more delegates, but at the end of the day no matter how much it is recounted it will break roughly even.

Clinton said she would be happy if the Iowa Democratic party decided to audit the result: whatever they decide to do, thats fine.

Both candidates have been reluctant to let the media focus on process questions which they believe are of little interest to Democratic voters and Sanders once again declined to comment on Clintons email controversy, saying it should not be politicised.

Clinton returned the favour when Sanders was asked whether he was losing control of [his] campaign due to a number of minor infractions by his staff involving advertising.

Do you want 30 seconds on this issue? Clinton was asked. No, was her helpful response.

But while the two candidates went on to agree on a number of matters such as the water crisis in Flint, Michigan, the debate which was belatedly requested by Clinton after months of criticism from rivals that there were too few will be remembered as the moment she came out fighting.

Once again, the two sparred most of all over who deserved to be seen as Obamas progressive inheritor. I am not making promises I cannot keep, shot Clinton, in an impassioned response to his recent charge that she is a part-time progressive. A progressive is someone who makes progress.

Until now, Sanders has been seen as the angry voice, while Clinton has struck a more moderate and pragmatic tone. On Thursday night, the passion was matched equally and little love was lost.

Asked if she saw Sanders as a possible vice-president, Clinton laughed.

Conscious perhaps of not wanting to look triumphant, she quickly added that he would be the first person she would call for advice when she won.

In the spin room after the debate, advisers for both campaigns agreed the momentum had been with secretary Clinton, but disagreed over how much it mattered.

I think the senator demonstrated tonight that he could go toe to toe with secretary Clinton in a debate, Sanders national press secretary Symone Sanders said. She is a very experienced debater, more so than senator Sanders, but he held his own tonight.

Clintons campaign manager, Robbie Mook, denied suggestions his candidate may have come across as too aggressive by accusing Sanders of artful smears.

Senator Sanders has repeatedly made veiled accusations against her. All she was asking him to do was lay it out, he said.

We clearly saw a robust discussion about what its going to take to be our next commander in chief, he added. Secretary Clinton clearly passed that test with flying colours. Senator Sanders struggled a bit.