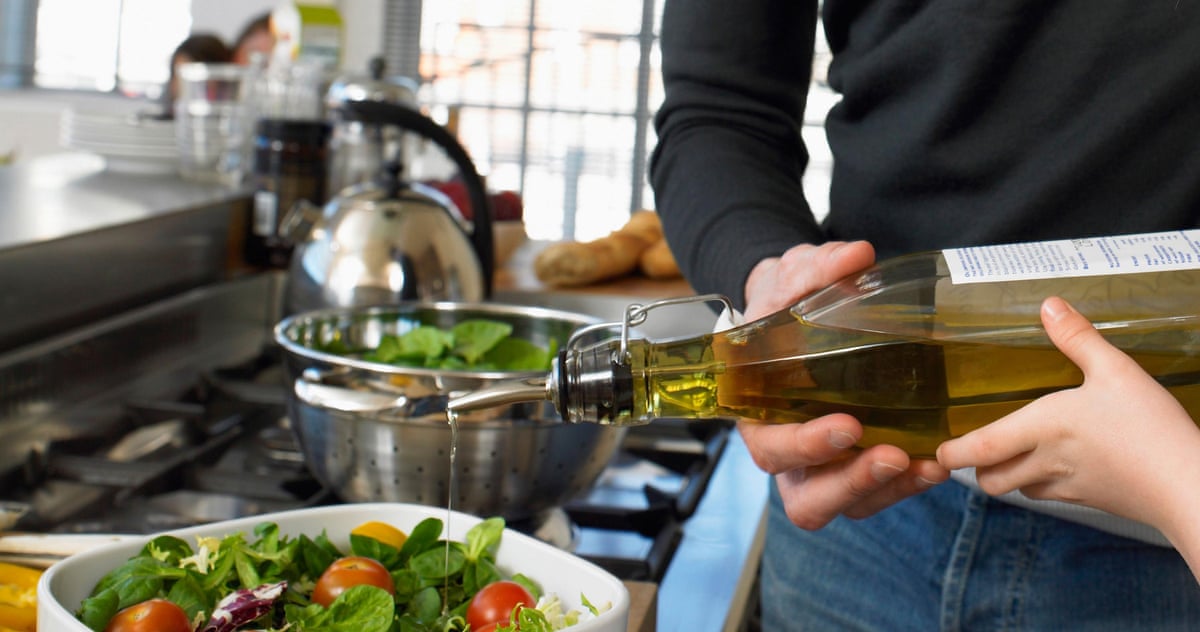 The Mediterranean diet, with a high fat content from olive oil and nuts, does not cause people to gain weight, a major study has found.

Fear of fat is misplaced and guidelines that restrict it in our diets are wrong, say the Spanish researchers who have followed more than 7,000 people, some eating 30g of nuts or 50ml of extra virgin olive oil a day while others were put on a standard low-fat diet. Their research, they say, should put healthy fats from vegetables and fish back on the menu, changing attitudes and the way we eat.

The publication of data on fats and weight loss from the respected Predimed randomised controlled trial, comes in the wake of a furore over a paper published by the UKs National Obesity Forum. The campaigning document attacked Public Health Englands guidance on diet, claiming that eating saturated fats including butter and meat would enable people to lose weight. A damning response from Public Health England said this was irresponsible and misleads the public. Four members of the NOF resigned, saying they did not support publication of the paper.

The Mediterranean diet in the Predimed study, however, though high in fats does not include red meat or butter. Participants ate fish, nuts, vegetables, fruits, and whole grains. It does not include many foods and beverages that have been associated with long-term weight gain, such as fast foods, sweets and desserts, butter, red meat and processed meat, and sugar sweetened beverages, write the authors in the Lancet Diabetes and Endocrinology journal.

Those who took part were randomly assigned to one of three groups. Some ate an unrestricted-calorie Mediterranean diet with added extra virgin olive oil (they were given 1 litre a week for themselves and their family), while others ate an unrestricted-calorie Mediterranean diet with added nuts they got 15g of walnuts, 7.5g of almonds, and 7.5g of hazelnuts, with an additional 1kg sachet of mixed nuts every three months to account for family needs, says the paper. The third group were put on a low-fat diet and given small non-food gifts every three months, such as a kitchen clock or spoons.

More than 90% of those who took part, aged between 55 and 80, were obese or overweight. Weight loss was not substantial, but was greatest in the Mediterranean diet with olive oil group 0.88kg compared with 0.60kg on the low-fat diet. All the groups increased their waist measurement, which tends to happen as people age, but the smallest increase was among those eating a Mediterranean diet with added nuts (0.37cm compared with 1.2cm in the low-fat group).

The Barcelona-based researchers believe the results should rehabilitate the Mediterranean diet, high in healthy fats, which has known health benefits including reducing heart disease and cancer.

The belief that fat is always going to make people fat, because it is calorie-dense, led four decades ago to mass sales in supermarkets of low-fat and fat-free foods. It had the unfortunate effect of contributing to the obesity epidemic, as food manufacturers substituted sugar and other carbohydrates for fat in everything from yoghurts to ready meals.

More than 40 years of nutritional policy has advocated for a low-fat diet but were seeing little impact on rising levels of obesity, said lead author Dr Ramon Estruch from the Spanish Biomedical Research Centre in Physiopathology of Obesity and Nutrition at the University of Barcelona, Spain.

Our study shows that a Mediterranean diet rich in vegetable fats such as olive oil and nuts had little effect on bodyweight or waist circumference compared with people on a low-fat diet. The Mediterranean diet has well-known health benefits and includes healthy fats such as vegetable oils, fish and nuts. Our findings certainly do not imply that unrestricted diets with high levels of unhealthy fats such as butter, processed meat, sweetened beverages, desserts or fast-foods are beneficial.

Obesity is a global concern and puts people at risk of heart disease, cancers, strokes and diabetes. Standard advice on losing weight is to eat a low-fat diet, say the researchers, while health bodies including the World Health Organisation recommend fat should make up no more than 30% of our diet.

Dietary guidelines should be revised to lay to rest the outdated, arbitrary limits on total fat consumption, writes Prof Dariush Mozaffarian, from the Friedman School of Nutrition Science & Policy at Tufts University, Boston, US, in a comment piece in the journal.

Calorie-obsessed caveats and warnings about healthier, higher-fat choices such as nuts, phenolic-rich vegetable oils, yoghurt, and even perhaps cheese, should also be dropped. We must abandon the myth that lower-fat, lower-calorie products lead to less weight gain.

We should be focusing on the quality of our food rather than the calorie content on restaurant menus, and it is paradoxical to ban whole milk but allow sugar-sweetened fat-free milk, he writes.

The fat content of foods and diets is simply not a useful metric to judge long-term harms or benefits. Energy density and total caloric contents can be similarly misleading. Rather, modern scientific evidence supports an emphasis on eating more calories from fruits, nuts, vegetables, beans, fish, yoghurt, phenolic-rich vegetable oils, and minimally processed whole grains; and fewer calories from highly processed foods rich in starch, sugar, salt, or trans-fat. We ignore this evidence including these results from the Predimed trial at our own peril.

Prof Simon Capewelll, vice-president for policy of the Faculty of Public Health, said the study and commentary, provide clear dietary messages; we need to promote a Mediterranean diet with olive oil and nuts, and cut our intake of meat, animal fats, refined carbohydrates, junk food and sugary drinks.