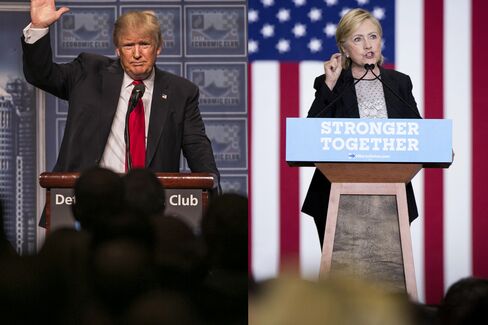 Democratic presidential nominee Hillary Clinton elaborated on her economic growth strategy in Michigan on Thursday, just days after Republican candidate Donald Trump put forward his own ideas. The charts below give context to the economic problems they’re pledging to repair.

On inequality, Clinton said: The economy needs more fairness.  At the outset of her speech, she summed up her focus, by saying “there’s too much inequality, too little upward mobility, and it’s just too hard to get ahead.” As the chart below shows, the gap between the richest and poorest has widened in recent years.

Trump said: Tax cuts and deregulation can help resolve poverty and economic malaise. Trump avoided the term “inequality” in his speech in Michigan on Monday.

On the minimum wage, Clinton said: Boosting the smallest paychecks via a federal mandate would put more money in the pockets of low-income families, helping them to spend more at the businesses in their neighborhoods. While not specifying exact levels in her speech Thursday, Clinton has supported a federal minimum of $12 an hour, while encouraging states and localities to push for a $15 minimum as they see fit.

Trump said: The minimum wage “has to go up,” according to his remarks in late July. Trump’s stance on the issue has actually varied throughout the campaign, however.

On the cost of education, Clinton said: Student debt is a major issue. “We’ll fight to make college tuition-free for the middle-class and debt-free for all,” while making it easier to refinance and repay what students with existing loans owe, she said.

Trump said: Student debt is a “tremendous problem.” He said last month that his team will be rolling out more details on providing relief.

On economic growth, Trump said: Tax cuts should be a central focus. His economic plan unveiled on Monday proposed compressing tax brackets and deregulation to boost the economy. “Their policies produced 1.2 percent growth,” Trump said of President Barack Obama’s administration. That particular data point is the latest quarterly GDP reading, though it’s not true of the entire recovery.

Clinton said: Look forward. “America’s best days are still ahead of us,” she said.

On the job market, Trump said: Almost 14 million more people are outside the labor force since Obama took office, which was in 2009. As the chart below illustrates, the number of people who are classified as out-of-labor-force has risen, a fact that economists attribute partly to demographics and partly to remaining slack in the labor market. Trump has vowed to be the “best jobs president.”

Clinton said: Promises about workforce training haven’t delivered as they should, and she would work to fix that. Clinton didn’t address labor force participation directly.

On poverty, Trump said: Better terms of trade will be a job creator, getting at the root cause of poverty and strains on the social safety net. Almost 7 million Americans were added to the ranks of those in poverty during Obama’s tenure, Trump said. As the chart below shows, poverty numbers have climbed, with the increase starting in the wake of the Great Recession and then persisting. The increase in the poverty rate has been less dramatic, however.

Clinton said: Pay has been stagnant. She advocated more taxes on the rich and a tax credit to encourage corporate profit-sharing.