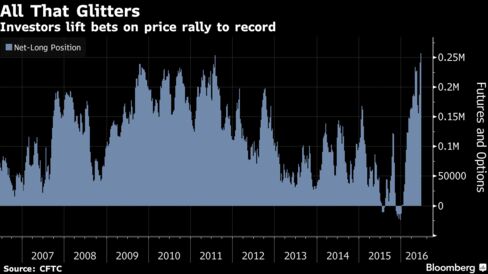 Unlike most of the world, gold investors got it right when it came time to betting on the Brexit vote. They were rewarded with a world-beating rally.

Hedge funds boosted their bets on price gains for bullion to an all-time high just two days before U.K. voters took to the polls and decided to leave the European Union, sending global markets roiling. Gold futures climbed to a two-year high after the referendum. The metals wild ride isnt over yet. Prices could jump another 7.7 percent by the end of the year, a Bloomberg survey showed.

Golds surge shows the metal is delivering on its role as a refuge, with prices on Friday posting the biggest increase of any major global asset. The gains added to whats already been a stellar 2016 for bullion. Futures are heading for the best start to a year since 1979. Speculation that the Federal Reserve will keep U.S. interest rates low has boosted demand for the metal as a store of value, while a volatile geopolitical backdrop has increased haven buying.

Money managers boosted their net-long position in gold futures and options by 6.7 percent to 256,898 contracts in the week ended June 21, according to U.S. Commodity Futures Trading Commission data released three days later. Thats the highest since the data begins in 2006. The previous record was 253,653 reached in August 2011 — just a month before gold futures touched $1,923.70, the highest ever.

In New York, futures advanced 2.1 percent last week to $1,322.40 on the Comex. The metal climbed as much as 7.9 percent on Friday, topping the gains of other major haven assets including the yen and Treasuries. Most global equity markets tumbled as many investors were stunned by the results of the British vote, which sparked panic on trading floors and prompted U.K. Prime Minister David Cameron to resign.

Prices could reach as high as $1,424 by the end of the year, according to the median of 12 forecasts in a Bloomberg survey of analysts and traders from New York to London conducted on Friday. That would be the highest since August 2013.

The precious metal has long been prized as a universal store of value immune to the whims of political leaders. The U.K. Royal Mint, which makes circulation and collector coins, and specialist online brokers reported surges in new customers after the Brexit vote. In Londons spot gold market, the biggest in the world, prices jumped as much as 8.1 percent, the most since the height of the global financial crisis in 2008.

Investors were also quick to snap up options contracts in New York betting on further price gains. On Friday, the most-traded gold option on the Comex was a call giving owners the right to buy the metal at $1,350 by July, exchange data show. The contract, which expires Monday, more than doubled in price. The August $1,350 call more than tripled.

Money has been pouring into gold all year amid increasing expectations that a volatile global growth environment will force Fed officials to hold off from raising U.S. interest rates. Holdings in exchange-traded products backed by the metal climbed last week to the highest since October 2013. The SPDR Gold Shares alone attracted $10.8 billion in new money this year, the most of more than 6,000 ETPs tracked by Bloomberg.

Golds gains in 2016 come after three straight annual losses when low inflation, a stronger dollar and an improving U.S. job market spurred some investors to lose faith in the metal as a store of value. The recent jump higher could be a selling opportunity, if the greenback continues to strengthen, said Sameer Samana, a St. Louis-based global quantitative strategist at Wells Fargo Investment Institute, which oversees $1.8 trillion. The dollar rose as much as 2.7 percent against an 10-currency basket on Friday.

But, bullion and the dollar climbed together in 2008 amid the global recession. Speculation that the world economy will sputter has spurred traders to cut the odds of a U.S. rate increase by December to 15 percent. Thats down from 78 percent just a month ago.

Gold Bull McEwen Sees Prices as High as $1,900 by End of Year

Gold Bulls Flee at Fastest Pace Since May on Rate Outlook