Women have been disparaged and harassed for too many years, and were not going to take one more minute of it. This election, were done 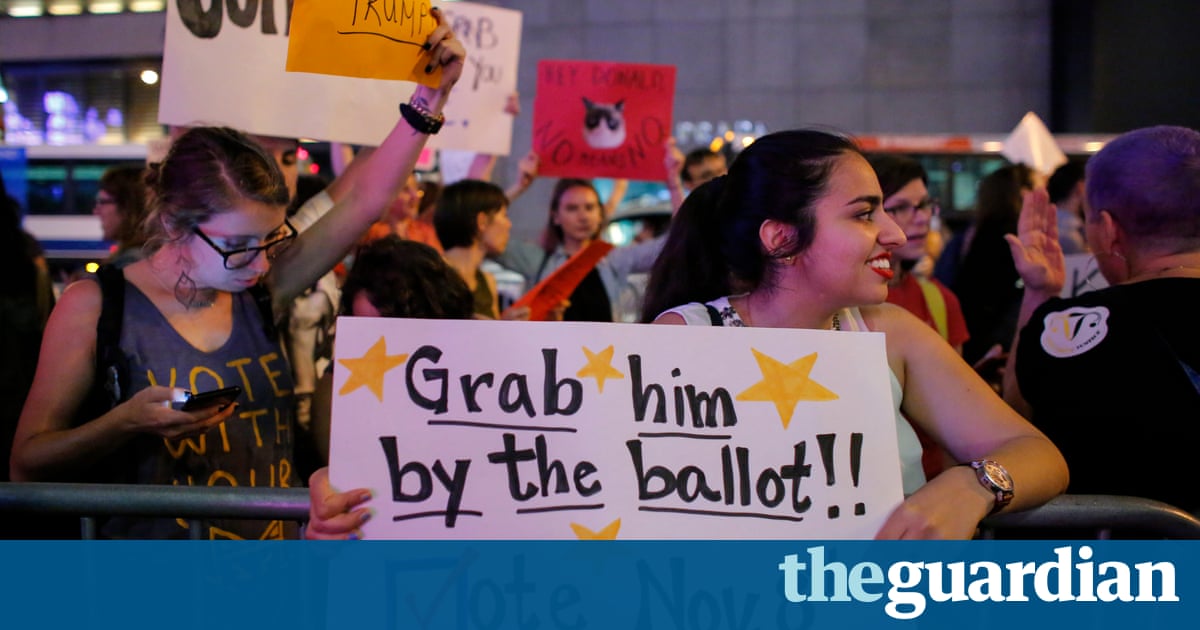 The following is an edited version of a speech made by Guardian writer Jessica Valenti to Planned Parenthood of the Southern Finger Lakes last week.

How is everyone doing? Ready for November 8 yet?

Tonight, I was asked to speak about a vision for the next hundred years of reproductive choice and justice. Its such a wonderful frame to think about what a feminist future might look like. But I bet like a lot of you, its hard to imagine what the next hundred years will look like when so much of that, for women especially, will depend on what happens in just 18 days.

There is no overstating how important this election is. Its not just about the next four or eight years. This decision is about sending a message about who we are as a country, and setting a very particular course for the women who live here. Well look back on this time as a watershed moment: a moment that could, in fact, shape the next hundred years of womens rights.

But first I want to share a personal story.

A little over six years ago, I was pregnant with my daughter, Layla. And when I was 28 weeks pregnant, I got incredibly ill. I developed pre-eclampsia, which some of you might know is dangerously high blood pressure during pregnancy.

I was admitted to the hospital and within just a few days, I developed another complication called HELLP syndrome, the short version being my liver was in danger of failing, and I was in danger of dying if my daughter was not born.

I had an emergency C-section and Layla was born weighing 2lb 2oz. She stayed in the neonatal intensive care unit for the first two months of her life, undergoing medical interventions to save and protect her that to this day I try to avoid thinking about.

I share this story often, because this was something in my life that changed me forever, that shaped who I am today.

And when I think about this moment, what I think about most often is how fortunate I was that I got sick far enough along in my pregnancy that I wasnt faced with the reality of needing an abortion to save my life.

And when I think about those days in the hospital the fear, the urgency, the confusion, the stress the idea that the government could ever become involved in my lifes most pivotal moment? It horrifies me.

So one thing I want for the next hundred years? I want for no person, ever, to fear that their most personal life choices will be made by someone else.

I want for no woman, ever, to be afraid that her scariest life moment will be made even more difficult and traumatic by government interference.

In the next hundred years, I want to see every woman be free from the fear that her body is not really her own.

And thats why I want to talk about this election tonight. Because thats whats at stake.

Never before in American politics have womens bodies been so front and center in the national conversation. And so at risk.

A choice between a person who has spent her life in public service, and a braggadocious businessman who rips off his workers.

And, perhaps most tellingly: were making a decision between a woman who has said that womens rights are human rights and a man who says if you want to, you can just grab women by the pussy.

Theres a feminist rallying cry online right now that I like a lot, and it says: November 8, pussy grabs back.

Now, I know that so much has been made of that comment, and the ensuing allegations against Trump by multiple women that he did just what he bragged about doing on that tape.

And while some people may not see the link between sexual assault and reproductive rights, those of us here in this room know better.

Reproductive rights and justice has always been about a fundamental respect or in this case, disrespect of womens bodily integrity and autonomy.

Either our bodies are our own, or theyre not.

And make no mistake, the conversation that were having right now about groping is not just salacious media fodder. The way we come out of this moment the direction our culture shifts because of it will absolutely determine womens rights in the future.

We are witnessing a moment where our country could move backwards back to a place where boys will be boys and men will make decisions for women. Or towards a future where our culture and politics understand and respect women as autonomous full human beings.

Those are the two paths.

Right now, Im optimistic that were on the right one. The one that brings us to the feminist future all of us in this room have been waiting for.

When Trump said he wanted to punish women for having abortions, there was outrage and he had to walk back those comments. But more importantly, pro-choice activists and organizations like Planned Parenthood were there to point out that while other politicians may not say they want women to be punished, thats exactly what would happen if abortion were made illegal.

And in fact, what has already happened to women like Purvi Patel, who was put in prison for inducing her own abortion in Indiana.

Our feminist future has no place for criminalizing women who decide if and when to parent.

When Donald Trump claimed that what he said on that Access Hollywood tape was just locker-room talk, and later when former New York City mayor Rudy Giuliani said that all men talk like this, men across the country came out to say: no.

This is not normal. This is not acceptable. Men are better than this.

The feminist future that were fighting for has men fighting alongside of us, men who refuse to be insulted by antiquated and sexist ideals about what it means to be a real man.

Because our feminist future is not one where misogyny will go unchecked. Women have been disparaged and harassed for too many years, and were not going to take one more minute of it. Were done.

Of course this feminist future the future that were so close to getting its not just being hinted at by the reaction and opposition to Donald Trump.

We are getting a sense of what that future could look like when we see the incredible way feminists and women themselves have changed the conversation.

This week, for the first time ever, a presidential candidate offered a nuanced and empathetic defense of late-term abortions on a national debate stage. This is a third-rail issue that most politicians wont touch, but Clinton talked about womens lives and experiences in a way that reminded us that this issue isnt just about policy its about us.

Were living in a moment when feminism is wielding more cultural power than it has in decades, maybe ever. People dont shy away from the word feminism any more, they embrace it.

When I started speaking on college campuses 10 years ago, I would ask how many people in the room considered themselves feminists. Back then, just a few people would raise their hands. When I speak at colleges today, nearly everyone does.

Feminism has become so popular that the conservative right has tried to appropriate it Sarah Palin calls herself a feminist, anti-choice organizations call themselves the real feminists. They recognize the power that the word and the movement have, and they want to use it toward their own, very anti-feminist, ends.

But our feminist future is a smart one, and it knows that anyone who would legislate womens bodies, who would interfere in womens and families private medical decisions have no place calling themselves feminists.

Of course, being in this incredible feminist moment when the first female president is about to win by taking down a man who is as close to a caricature of misogyny as you can get being in this moment doesnt mean that our feminist future is guaranteed.

Its not. Those of us who have been doing this work for years know that every time women make political and cultural strides, there is an intense backlash were in the midst of it now, and it will only intensify if Hillary Clinton becomes president.

Making sure that this backlash doesnt define us that we are not put on the defensive by it that is what will truly determine our feminist future.

Will we get pushed back on our heels or will we look straight ahead and move forward? Will we rest on our laurels because we have the first woman president or will we take our moment to celebrate and then move on to the hard work that still needs to be done?

If the people in this room, and the people at Planned Parenthood are any indication we know the answer to those questions.

This is just the beginning

My daughter tells me that she wants children one day. (Though she says she doesnt want to be pregnant her wife will have the kids.) But when she talks about having children, when I think about being a grandmother or a even great-grandmother one day thats when I think about those hundred years that weve been talking about.

I think about what the world will be like for them. And I have faith, I really do, that it will be a world that this will be a country where people determine their own destiny.

A world where we understand that reproductive rights are not just an issue of womens bodies but an economic issue, a family issue, and a human rights issue.

And the reason I have faith that future generations will see this vision of feminism and justice unfold is because of activists like you all here. Because of Planned Parenthood. Every day they are ensuring that the next hundred years will be years where womens words, lives, bodies and experiences matter. Years where were not defending ourselves from attack, but building something progressive and something real.