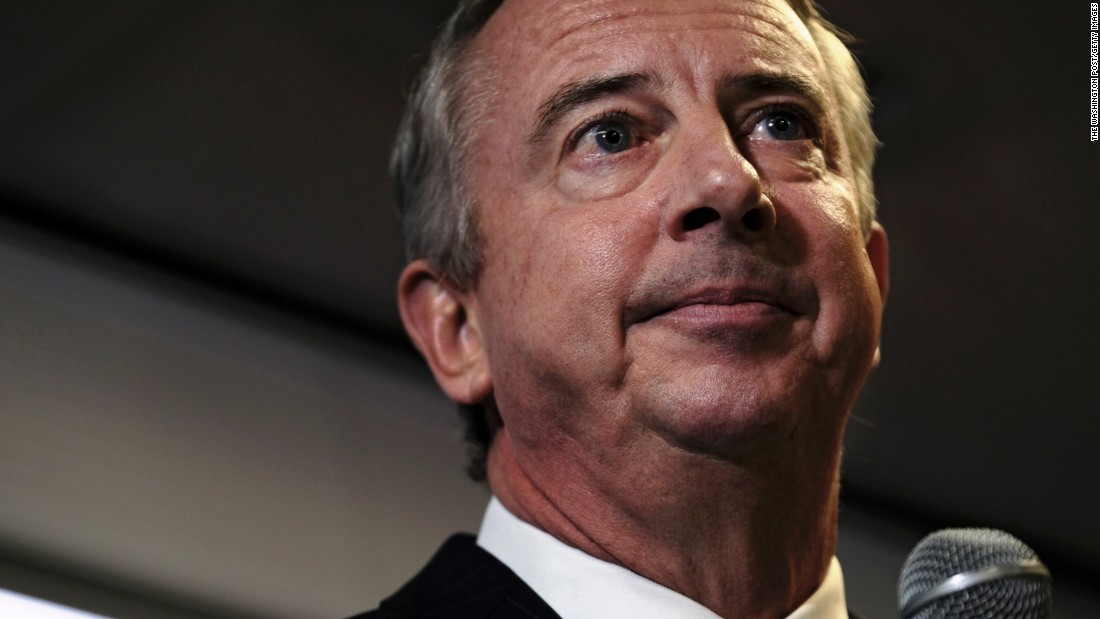 (CNN)President Donald Trump has endorsed Republican Ed Gillespie in the Virginia gubernatorial race. But the candidate appears to go out of his way to avoid mentioning his most prominent supporter.

Trump’s endorsement isn’t mentioned anywhere on Gillespie’s campaign website or his social media pages. Gillespie doesn’t discuss Trump unless he’s prompted to do so. He doesn’t criticize the President, but he also doesn’t make an effort to embrace him, either.
In fact, when Trump tweeted his support for Gillespie earlier this month, neither the candidate nor his campaign acknowledged the President’s support until they were asked about it by reporters. Meanwhile, his opponent, Democratic Lt. Gov. Ralph Northam, not only retweeted Trump’s tweet, he used it as an opportunity to fundraise for his campaign. (Trump backed Gillespie on Twitter again late Saturday afternoon, after this story was first published, and the candidate’s account retweeted him.)
A path to statewide victory for a Republican in Virginia, which hasn’t happened since 2009, requires the GOP to run up numbers with its base and win over as many independent voters as possible. At a time when Trump’s poll numbers are lagging, it’s difficult to have it both ways — few voters are ambivalent about the President, and as a result, it’s tough to embrace him fully or reject him outright.
Gillespie is hoping it can be done.
The stakes are high, too: the Virginia gubernatorial race is the first statewide competitive contest since Trump was elected. The outcome could influence both Republican and Democratic candidates in the 2018 midterm elections across the country, setting the stage for the remainder of Trump’s first term in the White House.
Northam, meanwhile, has taken a much different tack with his support from high-profile Democrats. Former President Barack Obama will appear with him at a rally on Thursday and Northam will campaign with former Vice President Joe Biden as well. Northam has been highly critical of Trump and his administration, at one point calling the President a “narcissistic maniac.”
It’s perhaps not surprising that Gillespie is taking a cautious approach when it comes to the commander in chief. Virginia was one of the few swing states that Trump lost in 2016, but the race was close and he still enjoys healthy support among Republicans there. Gillespie’s problem is that moderate Republicans and independent voters, both of which are growing in Virginia, appear to be increasingly wary of Trump.
Gillespie’s recipe is to embrace Trump’s policies without embracing the man. He checks all the traditional Republican boxes on social issues and fiscal policy and he is emphasizing key tenets of the Trump campaign, including a heavy focus on immigration. He’s currently running a hard-hitting ad tying illegal immigration to the rise of the MS-13 gang in Virginia, a position that led Trump to tweet his support.
But despite their similar stances, Gillespie still refuses to connect himself to Trump. When asked by Virginia’s WVEC-TV if he is happy with Trump’s endorsement, Gillespie replied, “I wasn’t surprised he endorsed me.” He also refuses to say if Trump will appear alongside him in the closing days of the campaign. Vice President Mike Pence campaigned for Gillespie Saturday night, but at this point, a visit by the President himself has not been ruled in or out.
“We don’t discuss campaign strategy with the media,” Gillespie spokesman David Abrams said. Similarly, the White House declined to comment.
While the campaign and the White House remain coy, talk show host John Fredericks, who chaired Trump’s campaign in Virginia and hosts a popular syndicated radio show, claimed the two sides are preparing for a last-minute rally. But neither the campaign or the White House were willing to back up his claim.
Trump also might be reluctant to expend political capital if Gillespie — who was trailing Northam, 53% to 40%, in a Washington Post-Schar School poll released earlier this month — isn’t assured of victory. Sources have told CNN the President was furious after establishment-backed Alabama Sen. Luther Strange lost a primary race last month despite his endorsement. As a GOP adviser to the White House put it, “Losing is bad for (Trump’s) brand.”
Gillespie, however, isn’t the only one trying to strike a careful balance with Trump. Despite weeks of heavy criticism against the administration, Northam, too, has been forced to adjust his approach in a bid to woo independents.
“If Donald Trump wants to help Virginia,” Northam said in an ad released earlier this month, “I’ll work with him.”