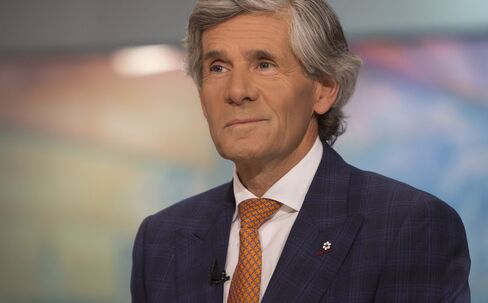 Robert McEwen, one of the golds industrys most unabashed bulls, is predicting prices could surge as much as 44 percent by the end of the year as confidence in the economy buckles.

The metal could trade in a range of $1,700 an ounce to $1,900 by the end of 2016 as uncertainty builds around the stability of global currencies and sovereign debt, said McEwen, whos so enamored by bullion that hes founded two producers: McEwen Mining Inc. and Goldcorp Inc. Record-low global interest rates will cause a huge amount of anxiety for investors, who will turn to gold as a store of value and an alternative asset, he said.

Gold is a currency that doesnt have a liability attached to it, McEwen said Tuesday in an interview at a gold conference in Colorado Springs. A store of value that has gone for millennia. And the big argument against gold used to be it costs you money to store it. Right now, its costing you money to store your cash.

In New York, gold futures for December delivery settled little changed at $1,318.20 on the Comex. Prices have climbed 24 percent so far this year, this biggest gain for this point in the calendar since 2011.

McEwen is betting big on gold. As the chief executive officer of his eponymous company, hes paid $1 a year and doesnt receive bonuses, wagering that his share holdings will reap him ample rewards. Hes doing this at a time when many gold executives have expressed caution over the metals recent rebound as the wounds still feel fresh from the bear market that started in 2013.

This isnt the first time McEwen, a 66-year-old former investment banker, has defied his own industry. In 2000, he launched an audacious experiment when he was at Vancouver-based Goldcorp. Offering $575,000 in awards, he threw open to the public more than five decades of proprietary data on the companys under-performing Red Lake mine in Ontario and challenged geologists to locate the next 6 million ounces of gold.

Red Lake ended up becoming one of Goldcorps richest gold mines, producing more than $3 billion worth of the metal, he has said.

This also isnt the first time that McEwen, who expects bullion could reach $5,000 in four years, has made bold predictions for prices. He gave the same outlook in 2009 and 2011 — the latter forecast came less than five months before gold peaked and then plunged as much as 46 percent to a five-year low reached in December 2015.

This time, McEwen expects a number of catalysts — from the U.S. election to instability at banks — could make his prediction come to fruition.

You have many more people involved in the market than you ever have before — crowd psychology is there, he said. Reasons for anxiety are multiple than what weve had in the past and there will be a triggering event.”

As for the elections, McEwen said that no matter which candidate wins over the U.S. populace, it will be positive for prices. Voters take to the polls in November, when Donald Trump, the Republican presidential nominee, will go up against Democrat Hillary Clinton.

Hillary has got a very accommodative platform, McEwen said. Shes made promises to every group you can imagine in the United States to give them money. Trump is less expansionary, but hes unnerved a lot of people with his statements, so they dont really look at this policies, they look at his rhetoric.

Gold Bulls Flee at Fastest Pace Since May on Rate Outlook