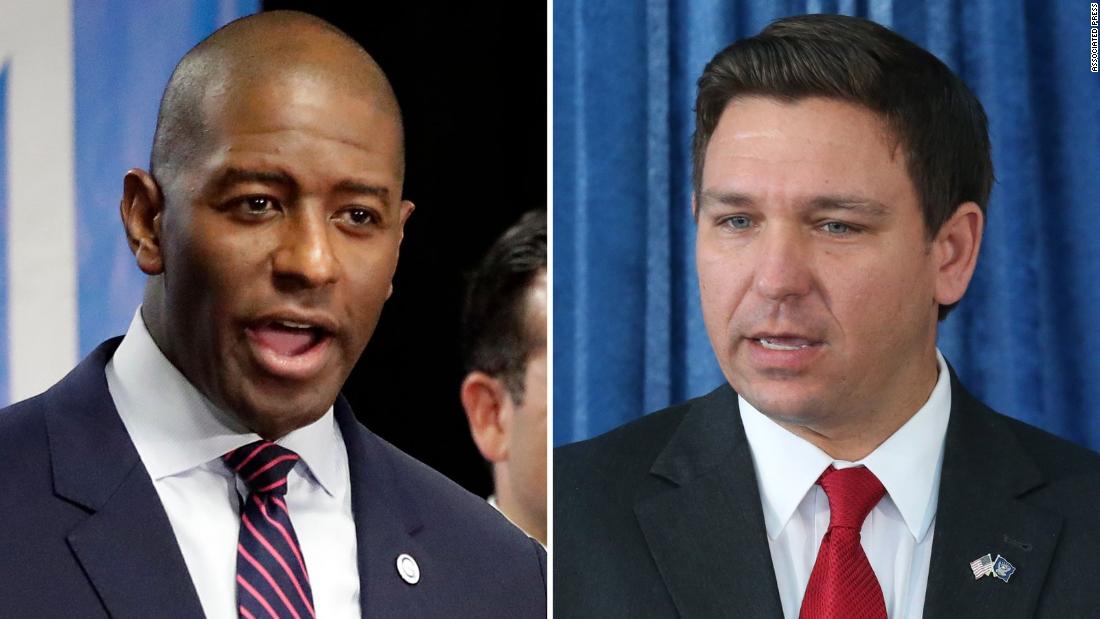 (CNN)Only a few days after making his return to the campaign trail following a hurricane-enforced hiatus, Florida Democrat Andrew Gillum will square off with Republican Ron DeSantis on Sunday night in the first debate of their high stakes gubernatorial race.

With only a little more than two weeks now before Election Day, and early voting starting on Monday, DeSantis is likely eyeing the showdown as an opportunity to alter the course of a race he’s consistently trailed in the polls. A new CNN survey conducted by SSRS out Sunday found Gillum with a double-digit lead, 54% to 42%.
At a campaign stop on Friday, Gillum, the young progressive mayor of Tallahassee, predicted the Republican former congressman would hit him low and hard — then warned he was prepared to return the favor.
“(DeSantis) is going to call me a socialist. He’s going to call me corrupt. He’s going to throw his covered-up versions of racial epithets. He’s going to call me anti-Israel,” Gillum said, comparing his opponent to President Donald Trump, whose endorsement DeSantis rode to victory in the August primary.
“I’m going to do everything I can to have a debate that is deserving of the people of Florida,” Gillum said. “But if I have to go there, I’m going to go there.”
Though they have blanketed the airwaves with ads, the debate will offer Gillum and DeSantis a chance to introduce themselves to voters in a more intimate and unscripted setting.
“There’s an element of this that’s sort of the initial pass/fail thing everyone has to go through,” Florida-based Democratic strategist Steve Schale said. “Obviously, I think Andrew’s done more of this stuff in his life, but both of them are fairly new quantities on the statewide scale and stage.”
DeSantis, like Gillum, was a surprise primary winner. But his transition to the general election has been a rocky one. After outlasting Adam Putnam, the state’s agriculture commissioner, DeSantis went on Fox News to warn Floridians not to “monkey this up by trying to embrace a socialist agenda” and voting for Gillum, who stands to be the state’s first African American governor.
“It has zero to do with race,” DeSantis said during the firestorm that followed. “It has everything to do with whether we want Florida to go in a good direction.”
DeSantis resigned from his House seat soon thereafter to focus on the gubernatorial contest. But his campaign, which in the primaries was almost entirely predicated on his fealty to Trump, has moved slowly in rolling out a policy platform. DeSantis opposes Medicaid expansion in the state, which Gillum ardently supports, but has still not — just weeks out from the election — released a comprehensive health care plan. His website’s issues page doesn’t address it, which polling has shown to be a top concern for Florida voters.
On Saturday morning, though, the Republican got another boost from Trump, who tweeted his support — and an attack on Gillum.
“DeSantis is working hard. A great Congressman and top student at Harvard & Yale, Ron will be a record setting governor for Florida. Rick Scott gave him tremendous foundations to further build on,” Trump said. “His opponent runs one of the worst & most corrupt cities in USA!”
Gillum promptly fired back, quoting Trump and suggesting the President hadn’t been brave enough to mention him by name: “When you lie about me from the most powerful office in the world,” Gillum wrote, “and still don’t have the courage to @ me…”
Trump was referring to an ongoing federal investigation into public corruption in Tallahassee. Gillum has said the FBI told him he was not a focus of the probe. Earlier this month, his campaign sent a letter to television stations asking that they halt running a Florida Republican Party ad that ties Gillum directly to it.
Gillum has successfully united Florida Democrats — one of his primary opponents, Chris King, is now his running mate — and has the uniform support of the political left’s best-known national figures. Vermont Sen. Bernie Sanders was an early supporter of Gillum, who has received significant financial backing from liberal megadonors Tom Steyer and George Soros. Gillum will appear alongside Hillary Clinton at a private event later in the week and, separately, at events with former Vice President Joe Biden, who will also be campaigning for Sen. Bill Nelson, the incumbent Democrat now in a tight re-election fight with GOP Gov. Rick Scott.
DeSantis and Gillum will meet again, for their second and likely final debate, on Wednesday in South Florida.