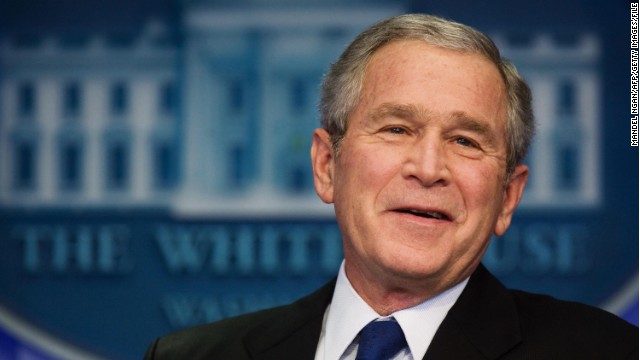 (CNN)Former President George W. Bush will attend a fundraiser this weekend in support of a Republican candidate for governor of Virginia, Ed Gillespie. The fundraiser will take place in Dallas, where the former president lives, and is expected to draw many big-money donors.

Gillespie served as a top aide to Bush during his time in the White House and was chairman of the Republican National Committee. The former president has largely stayed away from politics since leaving office. He has rarely campaigned or raised money for any candidates aside from his brother, former Florida Gov. Jeb Bush.
“Ed will travel to Dallas this week to raise money for his campaign. He’s proud to have the support of President Bush and conservative leaders from across the commonwealth and the country,” said Abbi Sigler, a Gillespie spokeswoman. “This is a crucial campaign for Virginia Republicans, and Ed will work tirelessly to ensure we have the resources necessary to defeat Ralph Northam or Tom Perriello in November, and bring conservative leadership back to Richmond.”
The fundraiser comes at a time when Gillespie has pulled away from the pack in a field of Republicans hoping to secure the GOP nomination. A new poll from Christopher Newport University shows Gillespie with a sizable lead in the primary over Corey Stewart, the chair of the Prince William County Board of Supervisors and State Senator Frank Wagner. However, more than a third of Republicans — 38% — remain undecided.
The Roanoke Times first reported the news of the fundraiser.
Stewart once served as the chair of Donald Trump’s presidential campaign in Virginia before being fired. His Trump-style campaign which includes tagging Gillespie with the moniker “Establishment Ed” because of his lengthy career in Washington has not yet caught on.
Democrats have a fierce primary battle of their own in Virginia. Lt. Gov. Ralph Northam, who enjoys the support of all of Virginia’s top elected democratic officials, is locked in a tight battle with former Congressman Tom Perriello. That same CNU poll shows the Democratic race is a tie. While Northam has the support of the Virginia Democratic infrastructure behind him, led by Gov. Terry McAuliffe, Perriello has pitched himself as the more authentic progressive — highlighted by the revelation in The New York Times that before Northam became a candidate he voted for George W. Bush twice.