Climate Home: Leaders back rapid implementation of the Paris agreement and ramping up of green finance, but fail to set timeline for phase-out of fossil fuel subsidies 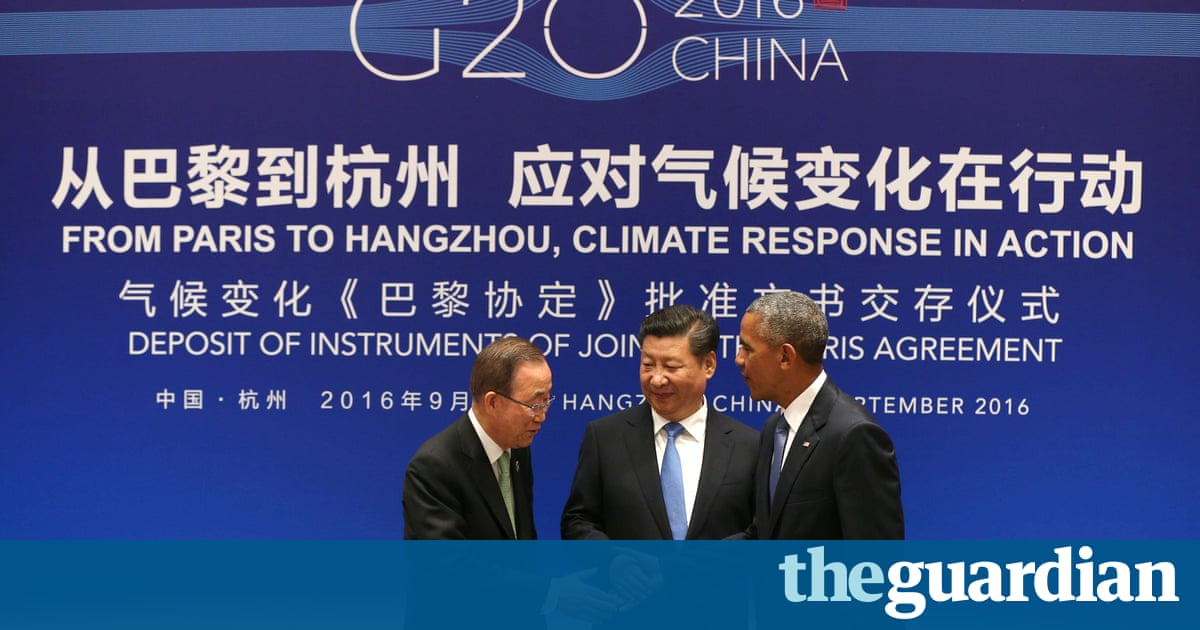 Leaders of the worlds biggest economies reaffirmed their commitment to tackling climate change as the G20 summit came to a close in Hangzhou on Monday night.

What they did not agree on were hoped-for deadlines to ratify the Paris climate agreement and phase out fossil fuel subsidies.

The G20 communique, released in French before it was released in English, committed the nations to ratifying the Paris climate agreement. Leaders expect a rapid implementation of the agreement in all its dimensions, it said.

However, it stopped short of calling on the entire G20 to join the agreement by the end of 2016. Arvind Panagariya, Indias chief negotiator at the G20 summit, told The Indian Express that he had argued against the inclusion of such a timeline.

I felt we were not quite ready yet in terms of the domestic actions that are required for us to ratify or at least commit to ratify within 2016. So we plan to do it as soon as possible, said Panagariya.

The push to bring the agreement into force this year was supercharged last weekend when the worlds two biggest polluters, China and the US, formalised their acceptance together. That brought the number of countries joining the treaty to 26 accounting for 39.07% of global emissions. The triggers for the pact to become law are 55 countries and 55%.

Oxfams advocacy and campaigns director Steve Price-Thomas said: The urgency for action to curb emissions and help the poorest cope with climate change cannot be overstated. The fact that G20 nations are seeking the ratification of the Paris climate agreement should be a matter of course.

Further dismaying observers was the failure to commit to a timeline for phasing out fossil fuel subsidies. The leaders communique repeated the language in previous texts that commits to a medium term end to a practice estimated to funnel between $160bn and $5.3tn into the fossil fuel industry, depending on how you define a subsidy.

Oil Change International senior campaigner Alex Doukas said: As more governments take the important step of ratifying the Paris agreement on climate change, they must stop giving handouts to big polluters, which undermine the spirit and the letter of the Paris deal.

One area that saw progress was a commitment to help shift trillions of dollars in private capital into the green economy. A passage affirmed that countries had taken on the recommendations of a study group convened hastily this year by the Chinese presidency, which made seven recommendations on the restructuring of the world economy.

Ben Caldecott, director of the sustainable finance programme at the University of Oxford Smith School, said: The shift to a more sustainable global economy will be the most capital intensive transition in human history. The G20 is right to focus on how to mobilise the finance required, and we warmly welcome the work produced jointly by the Bank of England and the Peoples Bank of China on green finance. It is important that this work accelerates under the G20 in Germany.

The fact that the shift in rhetoric came under the leadership of the country with the largest carbon emissions on earth was noted by many. Li Shuo, senior global policy advisor to Greenpeace East Asia said the countrys climate leadership was strengthened by the outcome of the G20.

With a strong call for early ratification and a joint Sino-US announcement before the G20, China has properly done its homework as the G20 president. This makes the early entry into force of the Paris Agreement an inconceivable task a short few months ago close to reality. The rhythm and durability of the new climate regime will be enhanced as a result of it. Now China needs to match its political effort with further action, he said.