With the presidential primaries only weeks away, both political factions have their head in the clouds 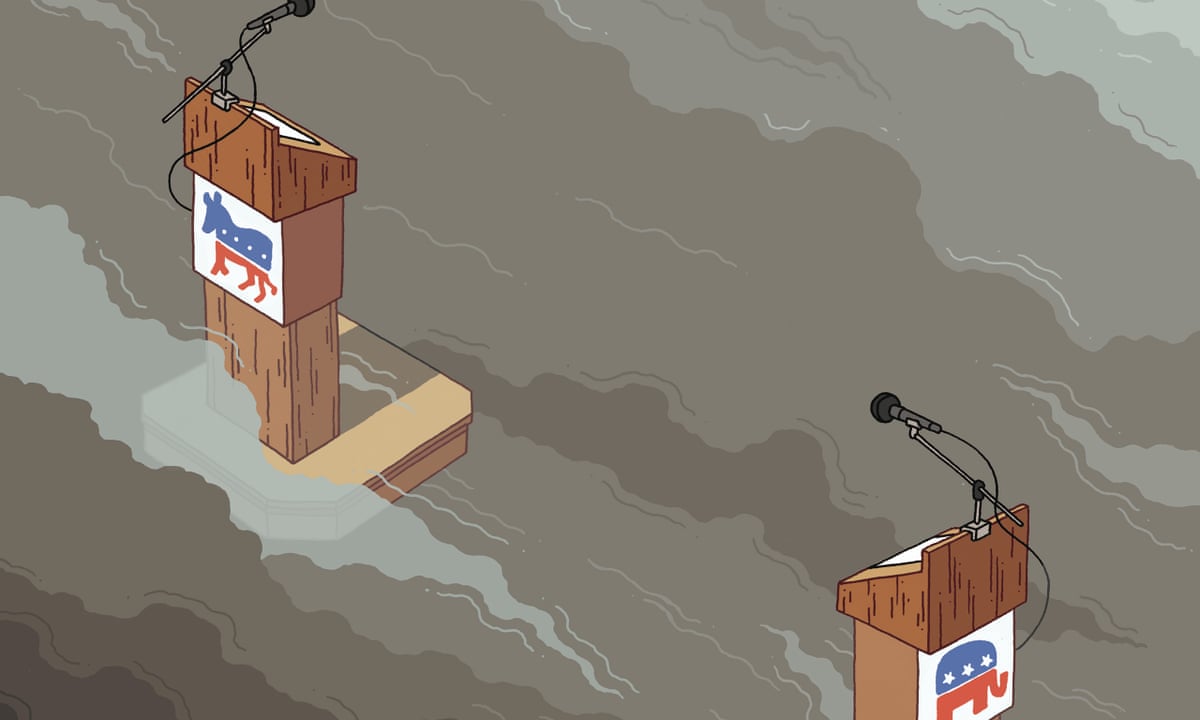 We have reached the point of the long presidential primaries where some clarity has normally been reached. After several months of overproduced TV debates, over-hyped nominee interviews and over-examined polls, the first votes are just one month away. Several nominees have already dropped out of the race; several more donors and hacks have either jumped or been pushed out the window. As George W Bush liked to say, its voting time.

But instead of clarity, the invisible primaries of this cycle the phoney war stage have brought us to a nation of delusion. The chief culprit is Trumpmania: a chronic ailment that has engulfed everyone from the voters lining up to attend his freewheeling rallies to the august pundits who lined up to dismiss the supposed fad last year; from the frightened Republican establishment to the transfixed news media and, of course, the braggadocious nominee himself.

Trumpmaniacs hold their opinions genuinely, madly, deep and without any foundation in reality. They are the inheritors of what used to be a reactionary fringe of American conservatism. They are the modern-day version of George Wallaces segregationists in Alabama; of the anti-international kooks of the John Birch Society; of Ross Perots anti-trade campaigners in the 90 s; of Pat Buchanans anti-establishment peasants with pitchforks; of the anti-Obama Tea Party movement.

The problem is that their views no longer posture them on the reactionary fringe of the Republican party. Given the positional and tonal overlap between three of the top Republican nominees Trump, Ted Cruz and Ben Carson the Trumpmaniacs represent virtually two-thirds of the Republican partys voters today. Their rise has tipped the formerly rational leadership of the conservative movement into the kind of incredulity that is clouding its own judgment. For months, the pundits and political establishment have insisted against all the polling data that Trump simply cannot win the Republican nomination.

But its easy to tell who could have stopped this delusion. The Republican leadership in Congress have been able to tamped it down, but chose instead to ignite it. They portrayed Obama as a socialist crank and refused to shut down the issue of his faith or his citizenship. They forecast an economic apocalypse in Obamacare, as well as nuclear war in the Countries of the middle east. They co-opted the spirit of the anti-establishment Tea Party, its rhetoric and its candidates, in the delusional hope that it would strengthen their hand. They were spectacularly wrong.

The partys resulting elected officials and donors have variously backed Jeb Bush, Scott Walker and Marco Rubio the freshman who may be the last best hope of the Republican establishment.

Bush is languishing in single digits, and Walker has dropped out. As for Rubios backers, there is a delusional and wilful ignorance of his political stumbles. He recently sat down with a small New Hampshire newspaper, but failed to deploy the media charm as considered on TV. It was like watching a computer algorithm designed to cover talking points, wrote the Conway Daily Sun. If there was a human side to the senator, a soul, it didnt come across. Last week he kicked off a traditional bus tour of Iowa, but the bus was just a prop: Rubio intersected the nation instead by private airliner. Add to that his disastrous attempt at immigration reform, and you find why establishment claims about the effectivenes of Rubio are unravelling. He trails Trump in third place by as much as 29 points.

But delusion also fogs the Democratic position of the landscape. Many Democrat watch smugly as Hillary Clinton holds the centre ground of American politics. After all, her unlikely challenge from the Senates sole socialist, Bernie Sanders, is now succumbing in Iowa and fighting in New Hampshire.

Many of those Democrats mistake the weakness of the rest of the field as proof of the force of the former secretary of state. Like Trump, Clinton seeks to attract the squeezed middle class, but it isnt yet clear whether she can truly deliver that middle-class message. She has a 25 -point economic plan to help them. But can she feel their ache, as Bill Clinton did?

The evidence is not promising. Clinton has styled herself as a compassionate grandmother, but the reaction has not been warm and cuddly. Her media squad targeted Latino voters last month with a listicle about the seven ways the no-nonsense former diplomat was just like your abuela.

The result was multiple postings from real Latinos about how she was nothing like their grandmother, along with the hashtag #NotMyAbuela.

Turnout will be key for Clinton, and apathy or downright incredulity remains her greatest foe. She will need the Democratic abuelas and the partys African-American base to show up in numbers sufficient to swamp what is now overwhelmingly the Republican support base: of white voters without a college education.

This is why Clintons best political friends are Trump and Obama: for both, in different ways, can drive minority voters to the polls and towards a Democrat ticket much more effectively than she can.

In their most delusional moments, Republican strategists like to claim that Trump has been good for them because he brings stratospheric TV ratings to their candidates debates. With hundreds of millions of Americans watching Republicans make their case against Clinton, the party is reaching huge numbers of ordinarily unplugged voters for the first time, they say.

They want to believe that might be pivotal. But it wont. Kim Kardashian also attracts a huge audience, and her husband, Kanye West, also threatens to run for chairperson. Great TV characters do not make for great presidential candidates, but great ratings can add to the delusion. In a months time, the audience will vote for a win in the caucuses of Iowa, and the reality depict will turn into a real election. If the delusions survive those first referendums, the Republican party will need years of therapy to recover.