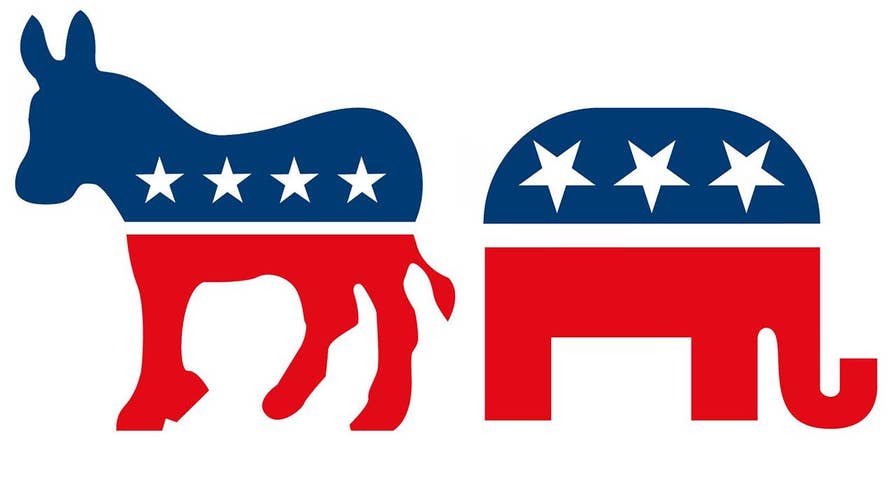 Democrats are in a strong position for the midterms, according to the latest Fox News poll.

Several findings point to the potential for a blue map in November:

– Republicans alone say the economy is in positive shape.

– Optimism about life for the next generation of Americans is down eight points from last year.

– There is greater enthusiasm to vote in the midterms among out-of-power Democrats.

Meanwhile, the Trump/Russia probe isn’t going away.  Approval of Special Counsel Robert Mueller stands at 59 percent, up 11 points since July, and 40 percent expect the investigation will find Trump committed criminal or impeachable offenses, up 5 points.  Tuesday afternoon, a jury found former Trump campaign manager Paul Manafort guilty of tax and bank fraud in the first trial to come out of Mueller’s probe and, around that same time, Trump’s former personal attorney Michael Cohen pleaded guilty to campaign-finance violations and other charges.

The national registered voter poll was conducted Sunday through Tuesday.

The survey shows if the election were today, 49 percent of voters would back the Democratic candidate in their House district and 38 percent the Republican.  That’s an 11-point edge.  Democrats were up by 8 points last month (48-40 percent) and 9 points in June (48-39 percent).  Given that Democrats’ vote is stacked in urban districts, experts estimate they need to carry the generic ballot test by about 10 percentage points to take over the House.

With Election Day just over two months away, more 2016 Hillary Clinton voters are “extremely” interested in the midterms than Trump voters (58 vs. 48 percent). They are also more enthusiastic about casting a ballot (51 vs. 37 percent) and more certain they will vote (76 vs. 67 percent).

Another takeaway: it comes down to women.  While the vote preference among men splits, women back the Democratic congressional candidate by 19 points.  In 2014, women backed the Democrat by 4 points, while men went for the Republican by 16.

Overall, when the ballot results are narrowed to “extremely” interested voters, Democrats hold a 56-38 percent advantage.  And when narrowed to counties where the 2016 presidential vote was close (Clinton and Trump within 10 points), Democrats are up by 45-39 percent.

“The Democratic edge in battleground counties is telling,” says Republican pollster Daron Shaw, who conducts the Fox News poll with Democrat Chris Anderson.  “These are where the competitive districts are that they need to flip to put Nancy Pelosi back in the Speaker’s chair.”

Voters say health care and the economy (18 percent each) will be most important to their vote for Congress, followed closely by party control of the House (14 percent), President Trump (13 percent), and immigration (10 percent).

Nearly half of voters, 47 percent, give the economy an excellent or good rating, while just over half, 51 percent, rate it only fair or poor.  The net positive rating is up 11 points from a year ago, and up 23 points from August 2016.  Plus, 12 percent feel the economy is in “excellent” condition.  In trend going back to 1998, that number has been higher only twice — and once was during Trump’s presidency.  A record 17 percent said “excellent” in January 2018.

It’s striking how much these views are driven by partisanship.  Only Republicans give the economy positive ratings (73 percent excellent or good).  Most Democrats (67 percent) and independents (67 percent) say the economy is in fair or poor shape.

When voters are asked, without being read a list, who or what they think is most responsible for the current economy, the most frequent answer is President Trump and Republicans.  Forty-four percent feel that way. Former President Obama and Democrats are a distant second at 15 percent.

Thirty-six percent of voters think the U.S. moving away from capitalism and more toward socialism would be a good thing, up from 20 percent in 2012. That shift is driven by a jump among voters under 30, as 60 percent say it would be good. It was 29 percent in 2012.

Approval of Congress is out of the teens for the first time since March 2015.  Currently, 23 percent of voters approve, up from 19 percent in April.  Sixty-eight percent disapprove.

The Fox News poll is based on landline and cellphone interviews with 1,009 randomly chosen registered voters nationwide and was conducted under the joint direction of Anderson Robbins Research (D) and Shaw & Company Research (R) from August 19-21, 2018.  The poll has a margin of sampling error of plus or minus three percentage points for all registered voters.