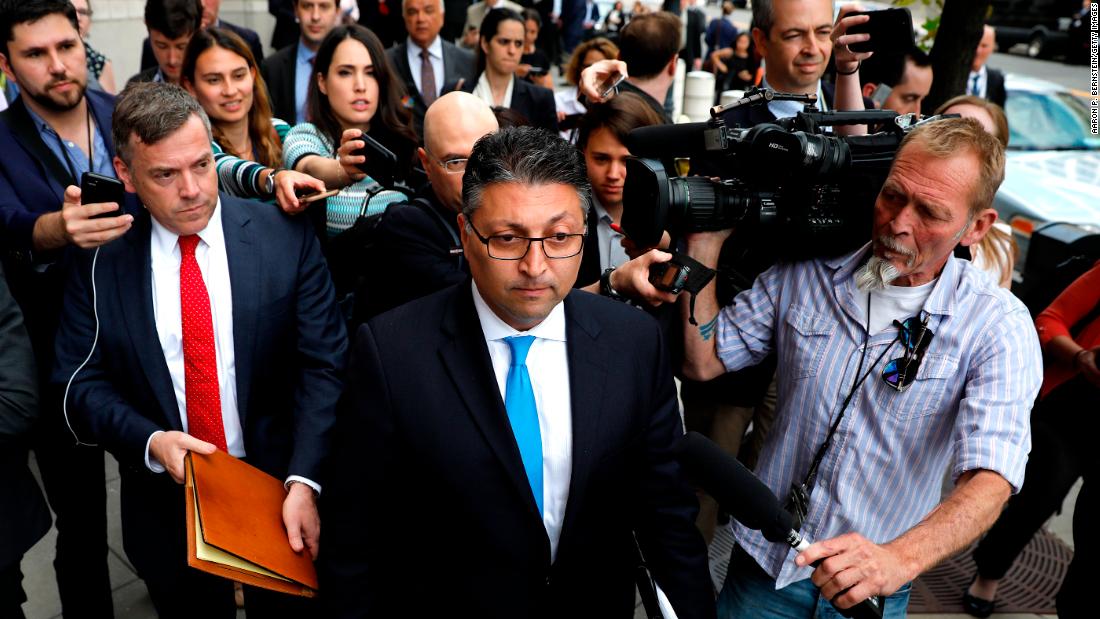 Delrahim is one of several people under consideration for the job, and has close ties to the Trump White House. As a deputy to then-White House counsel Don McGahn, Delrahim helped shepherd the confirmation of Supreme Court Justice Neil Gorsuch, which Trump has touted as one of his signature accomplishments.
Two months after joining the Justice Department in September 2017 as chief of the antitrust division, Delrahim led the government’s suit to block AT&T’s takeover of Time Warner Inc., a move that puzzled a number of legal experts and contradicted Delrahim’s own prior stance.
CNN, which was part of Time Warner and is now owned by AT&T, is a frequent target of the President, who promised to block the deal during the campaign in 2016. Delrahim has denied he ever received direct orders from Trump to stop the acquisition. A district judge approved the deal in June. Delrahim’s anti-trust division has appealed.
A source familiar with the process tells CNN that the White House likes Delrahim’s diverse background (he was born in Iran) and the fact that he’s already been confirmed, which would make it harder to justify rejecting him should he come up for confirmation as attorney general. Asked why the White House would like Delrahim, a former White House official said, “He was our guy.”

Trump in no rush

Still, White House officials say the President is in no rush to nominate a permanent successor to Jeff Sessions, who he fired Nov. 7. Instead, Trump has told confidantes he is happy to leave the man he named acting attorney general, Matthew Whitaker, in place while he mulls his choices.
Whitaker is a former US attorney from Iowa, who had been serving as Sessions’ chief of staff, but was never confirmed by the Senate for that position.
Now, he faces a number of legal challenges to his appointment. The latest salvo comes in a petition filed with the Supreme Court Thursday morning. A lawyer already challenging the constitutionality of Whitaker’s appointment told the Supreme Court justices that Whitaker’s appointment places the country is in a moment of “constitutional crisis” and that they should respond to a “power grab designed to protect the President personally by evading the authority and responsibility of the Senate and this Court under the Constitution.”
Though there is a debate over the validity of his appointment, under federal rules Whitaker can remain in his acting role for 210 days, which would take him into June. Once a nominee is selected, Whitaker can stay through the confirmation process. If that nominee fails to get confirmed, then the clock on Whitaker would restart at 210 days.
Whitaker’s selection was met by a torrent of stories that dug into his public criticism of the Mueller probe, which he now oversees. Notably, a source familiar with the process says Whitaker was informed of former Trump lawyer Michael Cohen’s plea ahead of time. Whitaker has also drawn fire for his links to a patenting company shut down by the government this year over allegations of fraud.
But rather than being put off by it, officials say the President actually took satisfaction from the outcry, believing the consternation from television pundits and Democrats meant he chose well.
As of now though, sources say Trump doesn’t plan on naming Whitaker to the job permanently, believing he has a chance to name someone of a more elevated stature who will act as a supportive voice within the administration.

That’s provided an opening for allies of the President, and potential picks themselves, to lobby for the job. As is his custom, Trump has polled friends and advisers about potential selections, according to people familiar with the conversations.
“A lot of people want that job. It’s a great job, if you’re into the world,” Trump said Monday at a roundtable rally in Mississippi. “We have a lot of good people … we have no dearth of talent, I can tell you that.”
Along with Delrahim, CNN has previously reported that the President is considering former New Jersey Gov. Chris Christie and Florida’s Republican Attorney General Pamela Bondi for the job.
Many Trump allies like Bondi, who appears frequently on Fox News, and she has long enjoyed a good relationship with the President.
“I’d consider Pam Bondi for anything,” Trump said earlier this month.
Still, she could face a difficult confirmation given the $25,000 contribution her political action committee received from Trump’s foundation during her 2014 re-election bid.
The donation came around the time Bondi’s office was reviewing complaints about Trump University and Democrats leveled allegations of impropriety after her office declined to pursue an investigation into Trump University fraud allegations.
A Florida ethics panel cleared Bondi of wrongdoing last year.
Current labor secretary Alex Acosta has also been under consideration, but a recent report from the Miami Herald likely jeopardizes that. On Tuesday, the Herald reported that in 2007 Acosta, then a US attorney in Florida, offered a plea deal to millionaire hedge fund manager Jeffrey Epstein, despite substantial evidence that he had engaged in an extensive sex trafficking scheme involving underage girls that could have landed him a life sentence in prison under federal law.
Instead, Epstein pleaded guilty to two state prostitution charges, and served only 13 months. The agreement made by Acosta, the Herald said, “essentially shut down an ongoing FBI probe” and further granted immunity to “any potential co-conspirators” in the case.
Eric Holland, a spokesperson for the Department of Labor, said in an emailed response to the report that “this matter has been publicly addressed previously, including during confirmation hearings.” At his confirmation hearing, Acosta defended his decision, saying there was broad consensus in his office.
A senior Trump administration official told CNN on Wednesday that Acosta’s chances to become attorney general are in serious doubt. Another source familiar with the attorney general process said Thursday Acosta had been ruled out.
Other names that have been floated as possible replacements for Sessions include Rep. John Ratcliffe of Texas, a former federal prosecutor, as well John Michael Luttig, a former US Court of Appeals judge and Justice Department official, and current general counsel at Boeing. One former White House official said Luttig is a strong possibility, though he has not met with the President. A second source close to Luttig says that he was considered for the role of FBI director after James Comey was fired.
Sources familiar with the matter say that William “Bill” Barr, a veteran Washington lawyer who served as US attorney general under President George H.W. Bush, has also been mentioned as a potential candidate. It’s not clear however if either Barr or Luttig would accept the nomination if offered.

One person likely not under consideration is Deputy Attorney General Rod Rosenstein, who remains on the job despite continued speculation that he will resign or get fired. Rosenstein’s face was among those included in an image the President retweeted Wednesday showing prominent Democrats and Trump critics behind bars. Asked by the New York Post why he felt Rosenstein should be behind bars, Trump answered, “He should have never picked a special counsel.”
After Sessions recused himself from the Russia investigation, Rosenstein selected Robert Mueller as special counsel. With Whitaker at the helm, Rosenstein no longer technically oversees the Mueller investigation, but his office still manages it day-to-day. Sources tell CNN that the White House no longer views Rosenstein as a threat, and it’s widely expected he’ll stay on until the next attorney general is confirmed.
People familiar with the matter say part of the reason that the President is in no rush to nominate a permanent attorney general is that he doesn’t want to leave too much time until hearings can commence when a new Congress convenes in January. That gap could allow opposition groups to unearth damaging details that could hamper a confirmation process that’s already expected to be contentious.
Also contributing to the slow pace is the current transition underway in the White House counsel’s office, which would traditionally shepherd an attorney general nomination from the selection process through to Senate confirmation. Incoming counsel Pat Cipollone has not yet formally started in the post; his predecessor Don McGahn departed in October.

Meanwhile, Whitaker has faced a drumbeat of criticism.
A Justice Department spokesperson told CNN earlier this month Whitaker is “fully committed to following all appropriate processes and procedures,” including “consulting with senior ethics officials on his oversight responsibilities and matters that may warrant recusal.”
But Whitaker has refused to explain whether he has, in fact, engaged career ethics officials at DOJ to review whether he needs to step aside from oversight of the Mueller investigation. After meeting with Whitaker on Capitol Hill, Republican Sen. Lindsey Graham told reporters that Whitaker conveyed that “he believed he did not have a reason to recuse himself legally or factually.”
At a Senate Judiciary Committee meeting the week before Thanksgiving, Senate Democrats took shots at Whitaker, questioning the constitutionality of his appointment and his history of public antagonism towards the Russia probe.
Scrutiny continued on Tuesday when the head of the Federal Trade Commission offered to brief senators on a case the agency had litigated against a Florida company connected to Whitaker that they called a “scam” in court.
In May, World Patent Marketing, which Whitaker sat on the advisory board of, agreed to pay a nearly $26 million judgment as part of a settlement agreement. A judge has partially suspended that payment. Legal filings from the FTC in the case revealed Whitaker himself once sent a threatening email to a disgruntled customer, accusing them of extortion.
Justice Department spokesperson Kerri Kupec said in a statement, earlier this month, that Whitaker “has said he was not aware of any fraudulent activity. Any stories suggesting otherwise are false.”
Staff from the FTC are expected to brief lawmakers on the case on Friday, according to a Democratic aide.
For his part, Whitaker has settled into his position as the acting chief law enforcement officer, meeting this week with leading national police groups at the Justice Department and law enforcement officials in Tennessee and Ohio.
Addressing the Memphis US attorney on Wednesday in front of a crowd of prosecutors there, Whitaker drew laughs with an apparent wink to his situation.
“I continue to believe that the United States attorney job is the best job that anybody could ever have. So you’re lucky to have it. Just be careful what you volunteer for next,” Whitaker said.