The amendment, backed by $20m from large energy utilities, has been described by Al Gore and environmentalists as a dishonest attempt to trick consumers 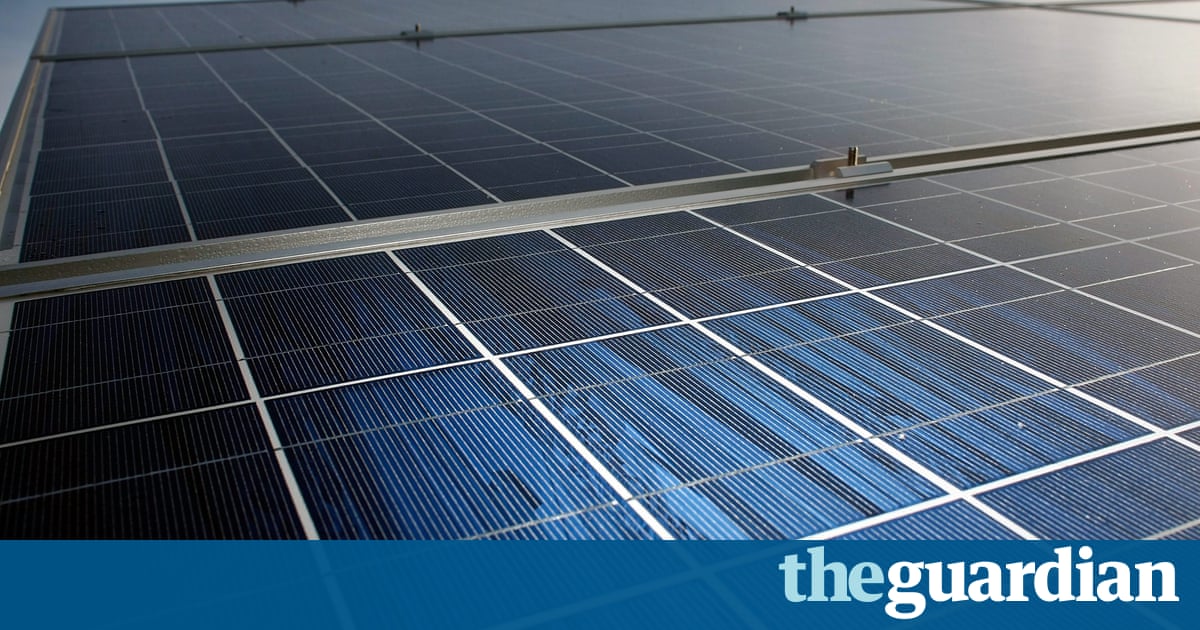 Climate change may have been largely ignored during the presidential election but it will be on the ballot on 8 November, with Florida voters deciding on a measure backed by large utilities that could effectively snuff out the solar industry in the state.

The measure, known as amendment 1, has been criticized as fundamentally dishonest for superficially appearing to be pro-solar. However, renewable energy experts warn that it would remove the incentive for homeowners to get rooftop solar panels, devastating the solar industry in Americas sunshine state.

The amendment would change Floridas constitution to give consumers the right to have solar panels installed. But it also states that the government should ensure that consumers who do not choose to install solar are not required to subsidize the costs of backup power and electric grid access to those who do.

A group called Consumers for Smart Solar, backed by more than $20m in campaign funding by Floridas large energy utilities, has put forward the measure, ostensibly to protect Florida residents from rip-offs. But critics contend that the proposal would lead the way to solar panel owners facing fees or a reduced price for the excess energy they put back into the grid, known as net metering.

The utilities have been fundamentally dishonest, their behavior is incredibly cynical, said David Pomerantz, executive director of pro-renewables group Energy and Policy Institute. It has confused quite a few voters and that was by design. The large electric utilities in Florida feel extraordinarily threatened by customer-owned solar. Instead of trying to adapt to it, they want to kill rooftop solar in the cradle.

Pomerantz said the measure would be a major blow to a solar industry that is already stunted in Florida. Fewer than 20,000 Floridian homes have solar panels, despite its enormous potential for solar energy, compared with Massachusetts, a north-east state with a quarter of the population, which has 163,000 homes with solar panels.

The dismantling of net metering, one of the few incentives to get solar in Florida, could have a similar outcome as that seen in Nevada, where increased charges and reduced net metering credits saw leading solar panel installer SolarCity pull out of the state.

Environmentalists have rounded on the Florida measure, with former vice-president Al Gore accusing the utilities of trying to fool you into killing off the solar industry. A court challenge to stop the measure was defeated in the Florida supreme court but Justice Barbara Pariente, in dissent, called the amendment a wolf in sheeps clothing and an attempt to constitutionalize the status quo.

Polling has shown strong support for amendment 1, although support has recently plummeted to close to the 60% threshold needed for the proposition to pass. The drop in support followed the Miami Heralds release in October of an audio recording by Sal Nuzzo, vice-president of free market group James Madison Institute.

Nuzzo told an industry conference that amendment 1 was an incredibly savvy maneuver and political jiujitsu that would completely negate anything (pro-solar groups) would try to do legislatively or constitutionally down the road.

Consumers for Smart Solar, the utilities-backed group, has denied any connection to the Hames Madison Institute and insisted that the amendment would protect consumers from scams and from subsidizing solar companies from outside Florida.

However, in looking at ways to increase the amount of our energy that comes from the sun, it is essential that we do so in a way that safeguards consumers particularly our seniors with commonsense consumer protection rules that benefit every consumer, and that we have all come to expect.

The Florida solar measure isnt the only climate-related item voters will decide on on Tuesday. Voters in Washington will decide whether the state will be the first in the US to introduce a carbon tax on emissions.

The measure, called I-732, would place a $25-per-ton fee on carbon dioxide emissions from 2018, rising gradually over the course of 40 years to $100. It will aim to be revenue neutral, however, because Washingtons sales tax will be cut by 1% and further tax rebated will be given to manufacturers and low-income households.

The vote has split environment groups, some of which supported an alternative that would have raised money to be funneled into clean energy projects. The Sierra Club has said it doesnt support I-732 because it does not include all that is needed for an equitable climate policy and just transition to a clean energy economy, in particular by failing to support communities of color and low income.

The projections put forward by Carbon Washington, the grassroots group behind the measure, have also been questioned. An analysis by the Washington Office of Financial Management found that the measure will cut the states revenue by $200m a year.

This revenue neutral measure offers the most progressive change in our tax code in decades and represents a bipartisan effort that rejects ideology, the letter states.

While many interrelated social and environmental needs demand our attention, complex problems are best solved one step at a time. I-732 is a simple step in the right direction.