Activists voice hope as they travel from Michigan to address lawmakers: For the first time, I felt like I could say: Somebodys doing something 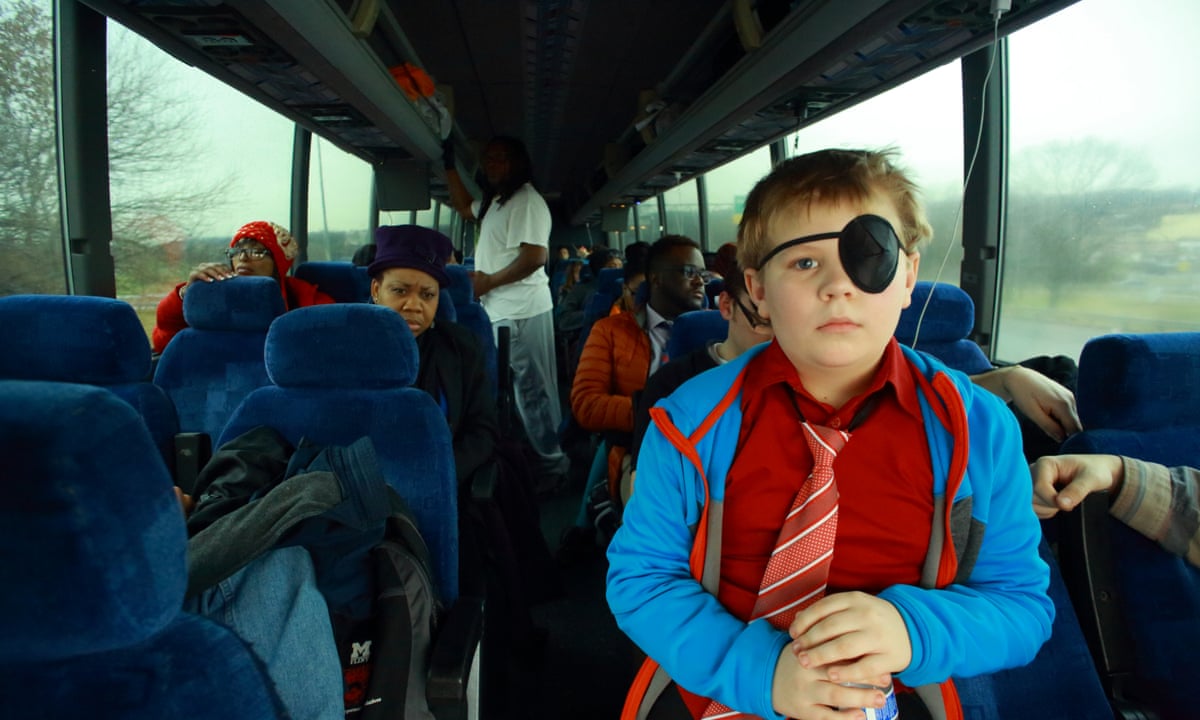 Jessica Owens carried a baby bottle in her hand filled with water from her faucet, the bottom lined with a grainy substance of some sort. She had been carrying the bottle since October, when state officials conceded that Flints water supply had potentially poisoned thousands of residents with lead. And she planned to bring it to the first congressional hearing on the citys water crisis.

We carry these because this is what theyve offered to our children, Owens said on the bus that would take her on a marathon 24-hour round trip to Washington DC to face members of Congress. In all, four buses carrying more than 100 people traveled the 1,150 miles from Flint, Michigan to Washington and back, carrying parents, hourly workers who skipped work, and even children who were ready to do whatever it takes to capitalize on the national momentum surrounding Flint and do whatever it takes to make their water safe again.

We speak with a voice, and we will be heard, said Owens, a fixture at protests in Flint and mother of an 8-year-old. I think its really important for every single person to come out, whether theyre from Flint, or for support, because our infrastructure is crumbling. And if it can happen here, it can happen anywhere.

For months, activists protested and complained about a foul-smelling and tasting water supply that left many with physical symptoms, only to receive dismissive shrugs from officials.

Then, the enormity of the situation that developed as a result of disastrous decisions came to light: lead, a neurotoxin known to cause developmental problems and an array of health issues was found last year to be contaminating drinking water across the Rust Belt city. On Tuesday, the American Academy of Pediatrics wrote to the congressional panel that thousands of children in Flint had been exposed.

Thats why, beyond seeking the estimated $60m full replacement of lead pipes in the city, residents traveled to Washington to call on lawmakers to hold those officials accountable for the debacle.

They were trying to save money. Now look what its cost them, said Jeff Apsey of AFSCME Council 25, which helped organize the trip. Speaking as the bus puttered along the Ohio turnpike, he added: It was a bad decision. I think the governor has a big part in this. Hes not willing to own up to it.

At a rest stop along the Ohio turnpike, longtime Flint resident Tammy Brewer, a passenger in one of the accompanying buses, said she was furious that officials waited months before telling residents the water wasnt safe to drink. Her family has endured a torrent of problems since Flint began using the local river, she said.

My body is literally riddled with these sores, Brewer said, while pulling back her sleeve to expose her shoulder. Losing my hair. Ive already had brain surgery. So what memory I have left is important. And Ive been complaining the last couple of years about my memory getting worse.

The residents dealt with officials dismissing their complaints for months, while still having to pay exorbitant sums for their water bills.

Nonetheless, an outlook of perseverance and resilience prevailed. The first overnight leg from Flint to Washington took so long, they missed the beginning of the congressional hearing. When the first hitch of the trip came up organizers misunderstood when the hearing in DC began, forcing the bus to miss the first hour an audio broadcast was quickly assembled and fed through the bus sound system. Others crowded around a live-stream carried on a residents iPhone.

Were all pumped back here, one passenger said in the back, as the bus was roughly 40 miles outside Washington.

The organizer smiled and added: Im sure everyone got the best nights sleep.

The congressional hearing drew so much attention that an additional two overflow rooms were set up to accommodate the influx of attendees. While the meeting was underway, one busload of residents marched down Independence Avenue, chanting Flint lives matter and arrest Governor Snyder. Guards outside the hearing room at times had difficulty keeping the hallway clear, as a swarm of activists piled in.

In the main chamber, members of Congress blasted state officials for their delayed response, with the committee chairman saying this sort of crisis isnt meant to happen in the US.

As the meeting continued throughout the morning, dozens of residents from the trip broke off to join a prayer vigil across the street, where Michigan officials were again criticized for their delayed response to addressing the crisis.

For one bus rider, Leroy Jackson, the outpouring of support was enough to make the long trip worthwhile.

For the first time in all this fight, I finally felt like I could step back and say: Somebodys doing something for us, he said. And Im happy. Im so happy I could just cry.

Since the leaching of lead into Flints water supply became a national scandal, city officials have switched the water source back to Lake Huron from the Flint River, which was corroding lead pipes and contaminating the water.

But as residents still rely on bottled water and grapple with the potential poisoning of their children, they remain concerned about the effects of the lead pipes that have already been damaged by the failure of local officials to implement crucial corrosion control. While Michigan is expected to get federal money to fund replacement of the pipes, governor Rick Snyder has said it is not a short-term goal to replace the pipes. And residents are becoming increasingly unsatisfied with a delayed resolution.

Many from the group coalesced around a primary goal: the replacement of the network of lead pipes in Flints water system. Mayor Karen Weaver called this week for the immediate removal of the pipes.

I would like to see the pipes tore up, done, replaced, get it over with, longtime Flint resident Tammy Brewer said. It needs to be done.

Sitting in a middle row, resident James Dunigan said passengers on the trip all knew someone who had been personally affected by this situation. So we want results, we want something done, he said. We want somebody to be held [accountable] for their actions.

Flint has faced decades of financial peril due to a fleeting tax base and increased violence, but Dunigan said the citys reputation as a downtrodden community is misleading. The 33-year-old had to get two shifts covered at his job with a sandwich chain shop to make the DC trek.

Were just regular people, he said. Were no different. I feel like the outside world is looking at us like a Third World country right now; its not like that, we just got a crisis right now.

During an impromptu pizza dinner in Washingtons Union Station as residents waited for a delayed bus home, Flint native Demetrius Backstrom described the hearing as a start in addressing the crisis. The 33-year-old was recently told by his doctor that he had high blood pressure, something he had never experienced before the city switched water sources. Now, his doctor wants to check his lead levels, too.

Backstrom said it was important for lawmakers to quickly act, before attention shifts away from Flint. The influx of resources bottled water, filters, and the like from state and federal aid may be appreciated, he said, but its nothing of a long-term fix to a colossal error with impacts that will likely be felt for generations.

We need clean water in Flint, he said. Because people are going to stop donating water to Flint. Its going to stop eventually, and then were right back to the same problem.