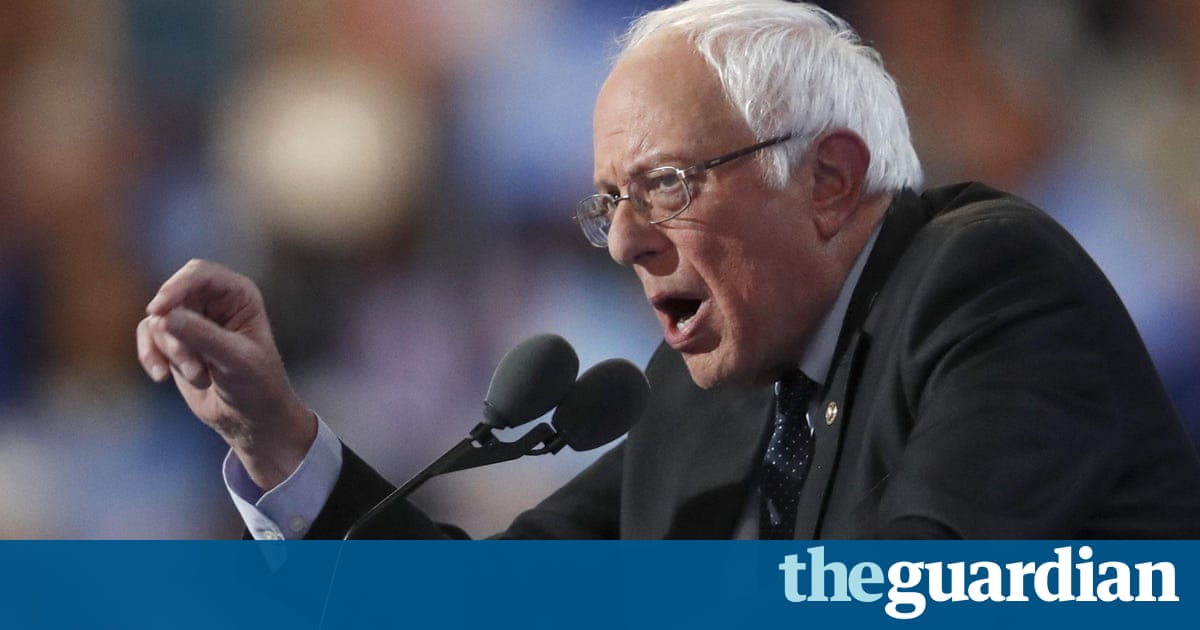 Bernie Sanders announced plans for his new grassroots organising project, Our Revolution, on Wednesday night, declaring that the struggle for justice still continues.

In a livestream watched by tens of thousands of people, Sanders told his supporters we have driven the debate and changed the mindset of people as he laid out plans to elect progressive politicians and work to improve criminal justice reform, single-payer healthcare and immigration policy.

But the launch was overshadowed by reports that a majority of Our Revolution staff members had resigned in the past few days amid an internal row.

The departures, including the entire organizing department and the groups digital director, came after Sanders former campaign manager Jeff Weaver was appointed president of the group.

Wednesdays announcement was broadcast from Burlington, Vermont, where Sanders appeared in front of a small crowd of supporters. The Vermont senator spoke for almost 50 minutes, much of which was spent hailing the success of his primary campaign.

Sanders cited his popularity among young voters as proof that our vision is the future of this country and took a dig at the Democrats, claiming that his campaign took on virtually the entire Democratic party establishment.

Our Revolution would build on the popularity of the primary campaign, Sanders said, by supporting progressives at every level as the group bid to plant liberal politicians throughout the country.

Real change never ever takes place from the top on down, Sanders said. It happens when people come together and demand fundamental change in this country.

He listed five of the progressives Our Revolution would be supporting, with the variation between level of office illustrating the breadth of the organizations vision. The candidates ran from Vernon Miller, who is running for school board in Nebraska, to Zephyr Teachout, who is running for US congress in upstate New York.

Sanders also listed some of the issues the organization would focus on, which include campaigning against Citizens United, lobbying for a single-payer healthcare system and working against fracking and climate change.

Our Revolutions chances of effecting this change would appear to have been impacted by the mass resignations, however.

Politico reported that staff had been unhappy with the way Weaver had managed Sanders primary campaign, as well as having concerns over Our Revolutions 501(c)(4) status. That categorization means it will be able to accept large contributions from anonymous donors.

The strategy would appear to put Our Revolution at odds with Sanderss oft-repeated primary campaign message: that big money does not belong in politics.

The New York Times reported that eight staff members comprising a majority of Our Revolutions employees had quit. Claire Sandberg, who was the organising director at Our Revolution until this week, told the newspaper the dramatic departures were a direct result of Weavers appointment.

I left and others left because we were alarmed that Jeff would mismanage this organization as he mismanaged the campaign, Sandberg said.

She said she was concerned over how Our Revolution, under Weaver, would raise and spend money; specifically that the group would betray its core purpose by accepting money from billionaires and not remaining grassroots funded and plowing that billionaire cash into TV instead of investing it in building a genuine movement.

Activists who had campaigned for Sanders during the Democratic primary relayed similar fears.

A grassroots organizer who worked alongside the Sanders campaign in New York said Sanderss presidential campaign had tended to ignore groundwork already done by Sanders supporters.

They said there was concern among grassroots activists that Our Revolution, under Weaver, would attempt to do the same.

During the campaign we would always already have operations running and would be doing things and the campaign would show up and throw everything out. It happened in New York and made it very difficult to organize, the organizer said.

Our Revolution did not respond to requests for comment on Weavers appointment and the subsequent resignations.