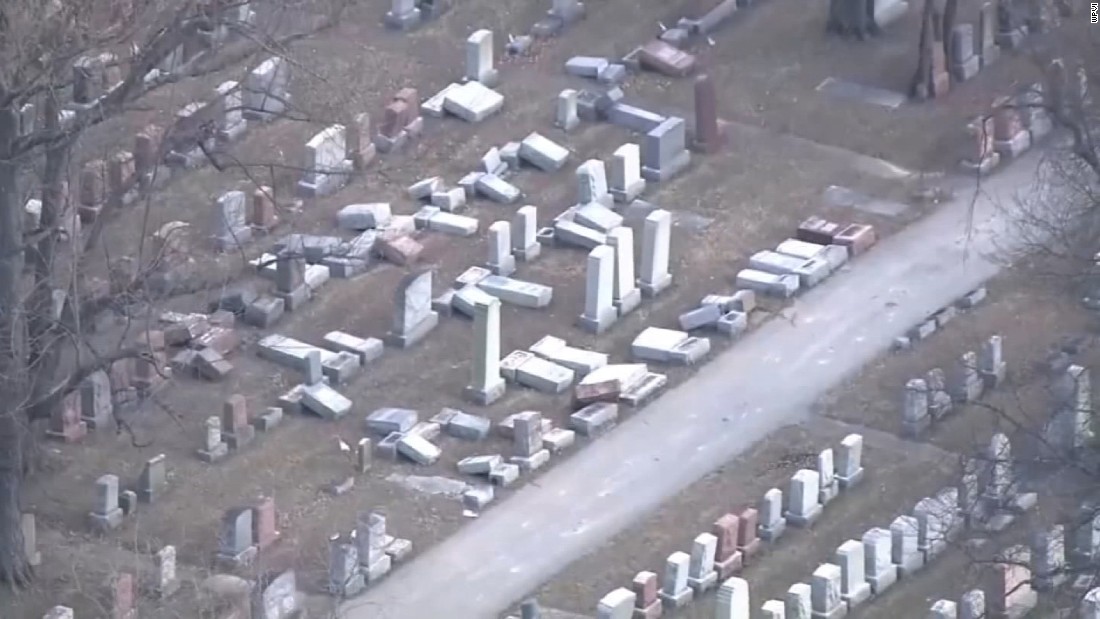 (CNN)The FBI has joined the investigation of vandalism at a Jewish cemetery in Philadelphia to determine whether a hate crime occurred.

Philadelphia police estimate 75 to 100 headstones were toppled Saturday night at Mount Carmel Cemetery, though people who visited the cemetery say the number is much higher.
Police have not offered a motive or made any arrests.
“The Philadelphia FBI Field Office, the Civil Rights Division, and the U.S. Attorney’s Office for the Eastern District of Pennsylvania have opened a civil rights investigation into vandalism at the Mount Carmel Cemetery,” the FBI office in Philadelphia said in an email. “The FBI will collect all available facts and evidence.”
The vandalism occurred less than a week after a similar incident at a Jewish cemetery near St. Louis and as dozens of Jewish community centers across the United States have received bomb threats.

People of the Jewish faith in the area said they were disturbed, especially when they saw the vandalism in person.
Adrienne Berger of northeast Philadelphia came to check on her parents’ headstone and found it intact. Still, she told CNN affiliate WPVI, “I felt suddenly unsafe as a Jewish person.”
Millard Braunstein of Cherry Hill, New Jersey, told Philly.com he discovered his mother’s tombstone had been knocked over. His elderly sister was not able to come with him.
“Yesterday was my sister’s 97th birthday,” he said, “and this was her birthday present.”
Rebecka Hess of West Philadelphia came to help clean up.
“I’m a child of a Holocaust survivor, so I grew up with stories of destruction of Jewish cemeteries,” she told WPVI. “I always thought we were done with that.”

‘This could be our grandparents’ 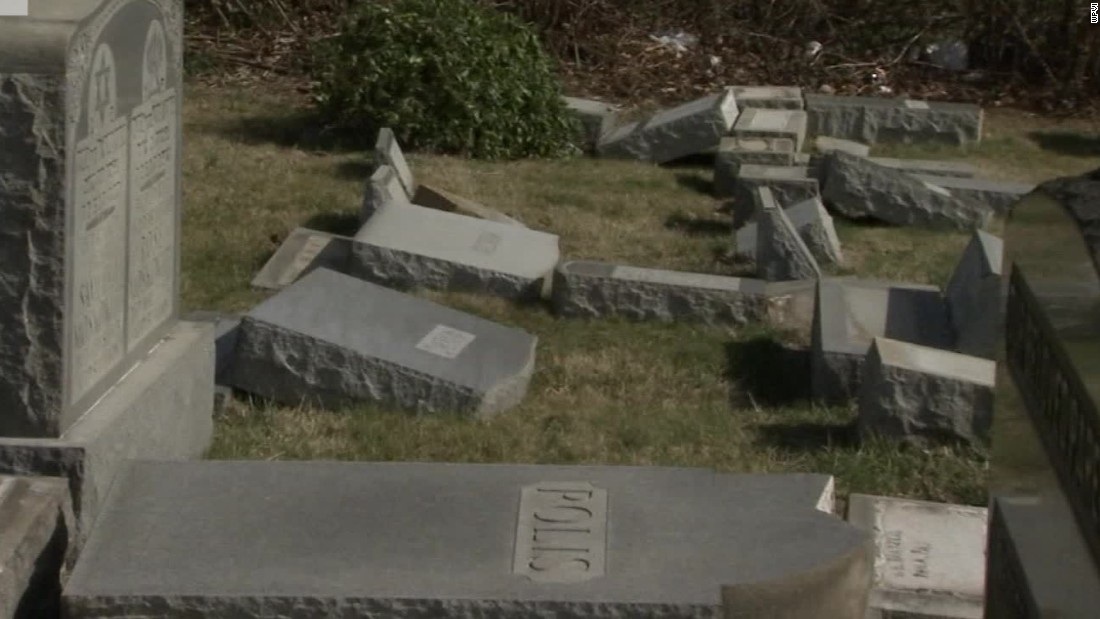 A range of groups decried the vandalism at the cemetery, which dates to the late 19th century.
Salaam Bhatti traveled from New York to see the damage for himself.
He was dismayed.
“This could be our cemetery,” said Bhatti, a member of the Ahmadiyya Muslim Community USA. “This could be our grandparents who have been attacked and are defenseless. We pray that justice is brought here for the Jewish community … can move on and prosper.”
He said as many as eight more members of his group came to Mount Carmel Cemetery to help out.
An interfaith group of religious leaders met in Philadelphia and agreed to not only help repair the cemetery, but to increase dialogue.
The Rev. Jay B. Broadnax, leader of the Black Clergy of Philadelphia and vicinity, said that group stands “against any acts of violence or acts of hatred that is elicited by the climate that we are seeing increase around us of hateful rhetoric. We must stand together. We are one community.”
The Anti-Defamation League is offering a $10,000 reward for information leading to the arrest and conviction of those responsible. The Fraternal Order of Police Lodge No. 5 offered a $3,000 reward for the same purpose.

An equally wide range of groups promised to help make repairs.
Bobby Henon, a Philadelphia council member who represents the Wissinoming neighborhood, where the cemetery is located, tweeted Monday that the Philadelphia Building and Construction Trades Council says it will replace the headstones for free and the International Brotherhood of Eletrical Workers Union Local 98 has offered to install additional lighting and security cameras.
“Good news: spoke w/ Building Trades which will restore headstones & IBEW will pay for/install security cameras @ Mt. Carmel cemetery.”
A crowdfunding campaign to raise money for the Jewish cemetery in St Louis raised seven times its goal, and a Muslim community activist who helped kick start it says donations will go toward other vandalized cemeteries, including Mount Carmel.
Tarek El-Messidi, founding director of Celebrate Mercy, said the fund has raised $130,000 since February 21. He said he expects $40,000 to $50,000 to go to the Philadelphia cemetery.
El-Messidi is from Philadelphia and went to the cemetery Sunday to see the damage.
“Just horrific images, to see it in person, to see people huddled over these graves in tears, embracing each other,” he told CNN.

Mayor Jim Kenney went to the cemetery Monday and helped make repairs, according to a photo on Twitter.
“I just lifted one (headstone) up with a guy, it’s his grandfather’s next to his father who was a Marine in World War II,” he told WPVI. “This country is in a bad spot and the stuff has to be called out right away, it’s got to be investigated.”
Gov. Tom Wolf condemned the vandalism and said he asked the Pennsylvania State Police and Office of Homeland Security to help with the investigation.
“We will not take these threats and acts lightly,” he said in a statement.
In Washington, White House press secretary Sean Spicer said President Donald Trump is “deeply disappointed and concerned” by the cemetery vandalism.
“The President continues to condemn these and other forms of anti-semitic and hateful acts,” Spicer said. “From our country’s founding we have been devoted to allowing our citizens’ rights to worship. The President is dedicated to preserving the originating rational of our nation.”

Two weeks ago, about a dozen headstones were damaged at a Catholic cemetery in Philadelphia, the Philadelphia mayor’s spokeswoman Lauren Hitt told CNN.
The vandalism at the Holy Redeemer Catholic Cemetery didn’t appear to target a specific group of people, and the investigation into that case is ongoing, Hitt said.
The cemetery is about two miles away from the Jewish cemetery.

Bomb threats have also recently plagued Jewish groups, with a new wave of them Monday.
Twenty-one threats were called into 13 Jewish community centers and eight Jewish day schools in Alabama, Delaware, Florida, Indiana, Maryland, Michigan, New Jersey, New York, North Carolina, Pennsylvania, Rhode Island and Virginia, said JCCA.
No bombs were found.
Since the first of the year, there have been 90 incidents at 73 locations in 30 states and one Canadian province, the association said.
“Anti-Semitism of this nature should not and must not be allowed to endure in our communities,” from David Posner, director of strategic performance at the JCC Association, said in a statement.
On February 20, it was discovered that more than 100 headstones had been toppled at the Chesed Shel Emeth Society cemetery in the St. Louis suburb of University City, police said.
Vice President Mike Pence and Missouri Gov. Eric Greitens visited the cemetery and condemned the vandalism.