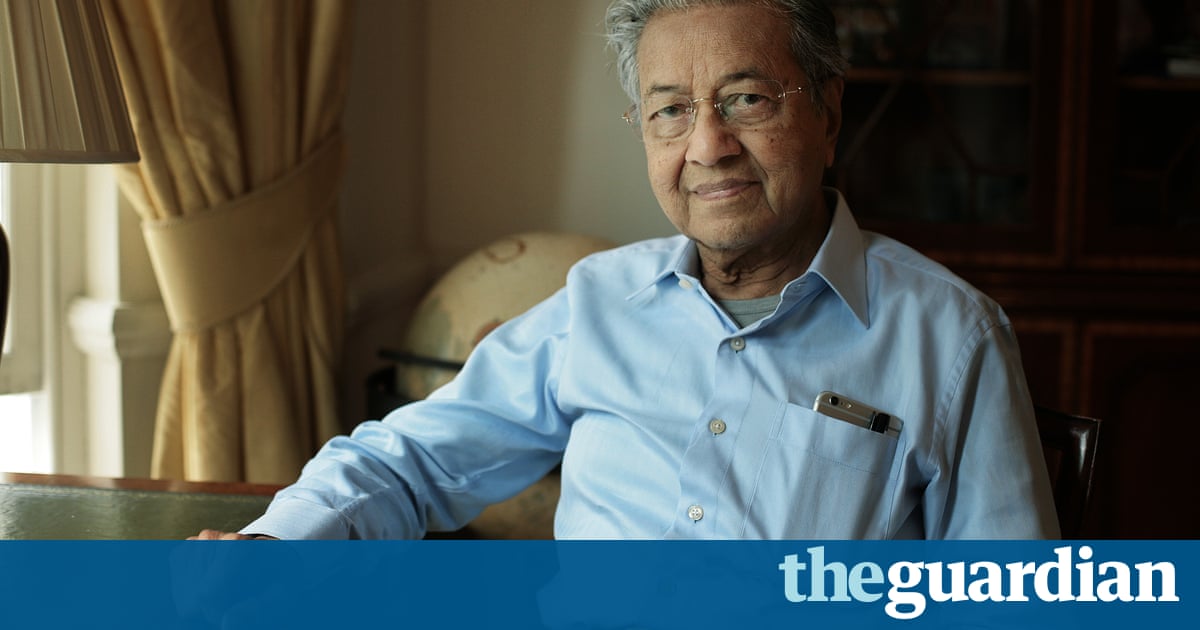 Mahathir Mohamad, the father of modern Malaysia, is backing the man he sacked as his deputy and saw imprisoned on charges of sodomy to be prime minister, in an attempt to unseat the scandal-ridden incumbent.

In a remarkable political U-turn ahead of a general election next year, Mahathir now says that his former protege Anwar Ibrahim, Malaysias most famous political prisoner and its most charismatic public figure, ought to be released from jail and allowed to contest parliamentary elections.

Human rights groups have long said the allegations against Anwar are politically motivated attempts by his opponents, including Mahathir and the current prime minister Najib Razak, to silence him.

Speaking to the Guardian on a visit to London, Mahathir, who in power was accused of being an autocrat, said Anwar is a victim of a political vendetta and that a new administration would seek a royal pardon to allow him to re-enter politics.

Anwars lawyers are currently seeking to get him released after evidence emerged that suggested an impartial government-appointed prosecutor was paid a sum equivalent to 2m from a bank account controlled by the prime minister.

In the case of Anwar we can make a case that he was unfairly treated. The decision of the court was obviously influenced by the government and I think the incoming government would be able to persuade the King to give a full pardon for Anwar, Mahathir said. In which case he would be able to participate in politics and become PM. I can have no objection to that.

Malaysias opposition has gained ground in recent years, and nearly toppled the governing party in 2013, winning the popular vote in the general election.

Since then prosecutors have filed a multitude of cases against government critics, including opposition figures, a professor and a cartoonist. A national security act, widely criticised by rights campaigners, came into force last year which gives the army and police sweeping powers for seizure and arrest, and does away with inquests into the deaths of anyone killed in zones declared under a state of emergency.

Mahathir stepped down in 2003 after 22 years in office, with no heir apparent. He brooked little dissent during his time in office, and ousted Anwar seen by many as his natural successor during a power struggle, ostensibly over an argument over the use of capital controls, in 1998.

A few weeks later Anwar was arrested, beaten by police, then charged with sodomy and corruption. After a trial widely considered to have been politically rigged, he was given a six-year jail term for abuse of power, sparking widespread protests.

Following his release in 2004 he became a leading opposition figure, before returning to prison in 2015 when a court upheld a five-year sentence on another sodomy charge.

Mahathir now accepts he made a mistake by not allowing Anwar to succeed him, and that he held on to power for too long, only to anoint two men who subsequently disappointed him, especially the current PM Najib, who is embroiled in one of the worlds largest kleptocracy cases.

According to lawsuits filed by the United States Department of Justice (DoJ), at least $4.5bn has been stolen from a state investment fund 1MDB. The purpose of the fund, which was set up by Najib as prime minister in 2009, was to promote economic development in a country where the median income stands at approximately 300 per month.

Instead, the DoJ alleged that stolen money from 1MDB found its way to numerous associates of Najib, who subsequently went on a lavish spending spree across the world. It also accused Najib of receiving $681m of cash from 1MDB. Najib has denied that claim, and all other allegations of wrongdoing.

Money from 1MDB, the US also claimed, helped to purchase luxury apartments in Manhattan, mansions in Los Angeles, paintings by Monet, a corporate jet, and even financed the Wolf of Wall St, a major Hollywood movie. Last week Australian model and actress Miranda Kerr handed over $8m of jewelry she received as a gift but which US authorities say was paid for by money linked to a Malaysian money laundering scheme.

Najib is bad news for Malaysia. For the PM to be accused of stealing huge sums of money, I think that is something we dont expect of any other PM. Certainly not in Malaysia. The money he is said to have taken is mind boggling, said Mahathir.

Mahathir remains hugely popular with a broad swath of rural Malay voters who remember the boom years of his rule.

He has registered a new party and is in talks to join the opposition coalition led by Anwars party.

He now accepts that the authoritarian turn Malaysia took under his rule including the use of the colonial-era Internal Security Act to jail troublesome opponents and tighten laws covering protests and the press needs to be reversed.

Mahathir said he never foresaw a prime minister like Najib who was willing to implement laws in a much more oppressive way than during my time.

Are the checks and balances not good enough? I agree to a certain extent they are not. We in Malaysia live in a multi-racial society and cannot be ever as liberal I think as the USA or Britain. But we should allow free expression in the press. Najib has a new security act that allows him to declare any territory under a state of emergency and detain people without any reason. I inherited and used the law. I did not abolish it and make another one even worse.